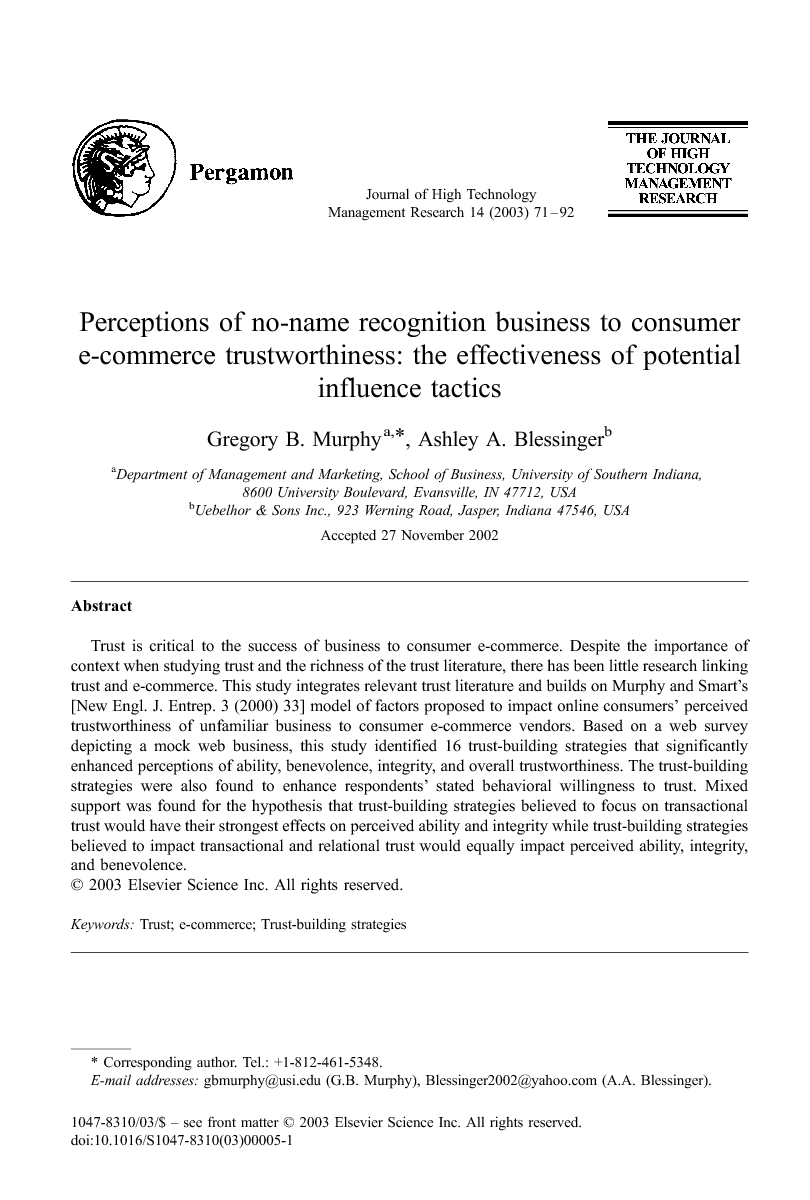 Trust is critical to the success of business to consumer e-commerce. Despite the importance of context when studying trust and the richness of the trust literature, there has been little research linking trust and e-commerce. This study integrates relevant trust literature and builds on Murphy and Smart's [New Engl. J. Entrep. 3 (2000) 33] model of factors proposed to impact online consumers' perceived trustworthiness of unfamiliar business to consumer e-commerce vendors. Based on a web survey depicting a mock web business, this study identified 16 trust-building strategies that significantly enhanced perceptions of ability, benevolence, integrity, and overall trustworthiness. The trust-building strategies were also found to enhance respondents' stated behavioral willingness to trust. Mixed support was found for the hypothesis that trust-building strategies believed to focus on transactional trust would have their strongest effects on perceived ability and integrity while trust-building strategies believed to impact transactional and relational trust would equally impact perceived ability, integrity, and benevolence.

The ability to build and maintain trust is critical to the success of e-commerce ventures (Cheskin Research, 2000). Recently, the importance of trust to e-commerce has been strongly noted in public speeches by the Commissioner of the Federal Trade Commission (FTC) in the United States (Business Wire, 2000), the Information and Privacy Commissioner in Canada (Wareham, 1999), and by officials in the Organization for Economic Cooperation and Development speaking in China (Xinhua, 2001). The Commissioner of the FTC identified trust as the key issue facing the future of e-commerce (Business Wire, 2000). The survival of business to consumer e-commerce vendors depends on their ability to convince online shoppers to click the purchase button, an act unlikely to occur if the vendor is perceived as being untrustworthy. The lack of trust in e-commerce has been widely and frequently noted Hoffman et al., 1999, Rogers, 1999 and Talwatte, 2000. This “untrust” must be overcome if e-commerce businesses are to build, confirm, and maintain trust (Cheskin Research and Studio Archetype/Sapient, 1999). Lewicki, McAllister, and Bies' (1998) model of trust and distrust implies that online consumers' lack of trust or apparent distrust must be met by considerable efforts to build trust if business exchanges are to occur. Jevons and Gabbott (2000) proposed that branding is the key to building online trust. However, extensive branding typically favors established incumbents, not those yet to make a name for themselves. Many no-name e-commerce ventures, challenged by the liability of newness (Stinchcombe, 1965), will predictably fail if they rely on their relative branding ability. Relative to no-name ventures, established counterparts are often able to commit substantial resources to marketing and advertising and are often able to draw on the branding advantage they have established in the brick-and-mortar environment. Given these disadvantages and the importance of trust in generating online sales, an investigation of tactics available to no-name ventures that may help improve their perceived trustworthiness is very relevant. This paper investigates the effectiveness of potential trust-building tactics. Specifically, this paper investigates potential online consumers' assessments of e-commerce vendor trustworthiness based on information cues presented on web pages, which have the potential to build trust among unfamiliar parties. Aldrich and Fiol (1994) noted that the need for trust is greatest when transacting parties have little or no experience with or knowledge of each other. By focusing on trust-building tactics available to no-name recognition e-commerce ventures, this study seeks to provide information that may help such ventures overcome the liability of newness and their relative branding disadvantage. To continue the study, the relevant literature on trust is reviewed, a model of trust-building tactics is adopted and modified, and the research methods and results are presented. A discussion of the study concludes the paper.

There has arguably never been more pressure on e-commerce businesses to turn a profit. Investors have largely lost patience with e-commerce businesses as evidenced by the recent sharp decline in technology stocks in general and Internet stocks in particular. Business to consumer e-commerce has failed to meet analysts' sales predictions (Hoffman et al., 1999) despite the presence of more online shoppers and businesses. The problem is that, while many are surfing, relatively few trust e-commerce businesses enough to click the purchase button (Hoffman et al., 1999). This paper addresses this important issue and offers multiple strategies that e-commerce managers can use to increase perceived trustworthiness. The finding that isomorphism and strategic manipulation tactics are capable of increasing perceived trustworthiness in the absence of prior familiarity is particularly relevant for little-known e-commerce businesses. Cheskin Research and Studio Archetype/Sapient's (1999) e-commerce trust study included and was heavily influenced by the effects of brand recognition, limiting its applicability to little-known ventures. By building on and testing Murphy and Smart's (2000) model of trust-building strategies for new and small e-commerce ventures, this study removes the effects of prior familiarity, making the results more useful for little-known ventures that need trust the most. Lewicki et al. (1998) noted that effort is needed to overcome distrust and build trust. This study found 16 trust-building strategies to be capable of enhancing perceptions of trustworthiness in the absence of prior familiarity. Richness is added by studying both trusting beliefs and trusting behaviors (McKnight et al., 1998). This paper suggests, for example, that little-known e-commerce ventures seeking to build perceived ability and/or benevolence should ensure that fulfillment processes are clearly communicated whereas those seeking to enhance perceived integrity should seek out and communicate valuable business alliances. The finding that all 16 of the trust-building strategies positively and significantly impacted each measure of trustworthiness increases the likelihood that a given e-commerce venture, regardless of the trust-building strategies currently employed, will be able to find in this study, at least one more means of improving their perceived trustworthiness. This study supports Garbarino and Johnson (1999), Harrison et al. (1997), and McKnight et al. (1998) and counters Rousseau et al. (1998) by finding that a degree of relational trust can be established in the absence of prior experience. Although perceived ability and integrity were generally stronger than perceived benevolence, each of the 16 trust-building strategies clearly improved perceived benevolence, offering evidence of improved relational trust in the absence of prior experience. Using mock web pages placed the study more in context and hopefully increased the realism of the study. Although this was a strength of the study, the study did not simulate web users' free navigation flow in order to maintain control over what the respondent was seeing and reacting to. This suggests that practitioners may want to place their best trust-building cues in prominent locations on frequently viewed pages to ensure they are seen. The survey design used in this study made parsimony critical. To assess the effect of each proposed trust-building strategy and add clarity to the study, each mock web page was limited to one information cue (aside from the standard background setting previously described), limiting the combination of breadth and depth that could be explored. This study focuses more on breadth, making it a rough-grained study and creating room for more fine-grained analysis. Concerns over page loading times and possible respondent impatience limited the size of the study. For academics, this study extends research on trust to the important and appropriate context of e-commerce. As Rousseau et al. (1998) noted, context is important when studying trust. An attempt has been made to integrate theory and previous research from management, marketing, entrepreneurship, and the practitioner literature. Given the relative dearth of academic literature addressing trust and e-commerce and the diversity of disciplines studying trust, there is, no doubt, considerable room for future research in this area.