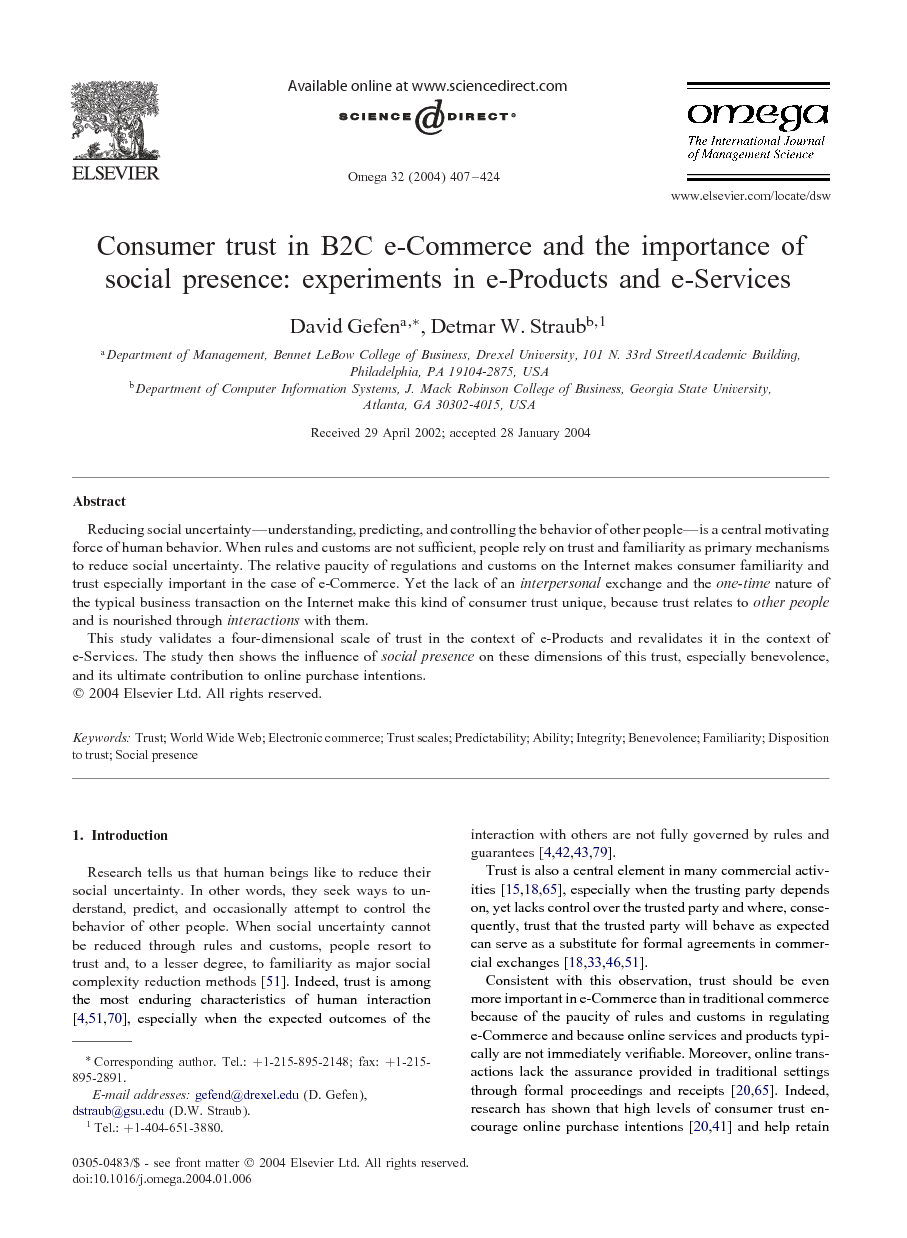 Reducing social uncertainty—understanding, predicting, and controlling the behavior of other people—is a central motivating force of human behavior. When rules and customs are not sufficient, people rely on trust and familiarity as primary mechanisms to reduce social uncertainty. The relative paucity of regulations and customs on the Internet makes consumer familiarity and trust especially important in the case of e-Commerce. Yet the lack of an interpersonal exchange and the one-time nature of the typical business transaction on the Internet make this kind of consumer trust unique, because trust relates to other people and is nourished through interactions with them. This study validates a four-dimensional scale of trust in the context of e-Products and revalidates it in the context of e-Services. The study then shows the influence of social presence on these dimensions of this trust, especially benevolence, and its ultimate contribution to online purchase intentions.

Research tells us that human beings like to reduce their social uncertainty. In other words, they seek ways to understand, predict, and occasionally attempt to control the behavior of other people. When social uncertainty cannot be reduced through rules and customs, people resort to trust and, to a lesser degree, to familiarity as major social complexity reduction methods [51]. Indeed, trust is among the most enduring characteristics of human interaction [4], [51] and [70], especially when the expected outcomes of the interaction with others are not fully governed by rules and guarantees [4], [42], [43] and [79]. Trust is also a central element in many commercial activities [15], [18] and [65], especially when the trusting party depends on, yet lacks control over the trusted party and where, consequently, trust that the trusted party will behave as expected can serve as a substitute for formal agreements in commercial exchanges [18], [33], [46] and [51]. Consistent with this observation, trust should be even more important in e-Commerce than in traditional commerce because of the paucity of rules and customs in regulating e-Commerce and because online services and products typically are not immediately verifiable. Moreover, online transactions lack the assurance provided in traditional settings through formal proceedings and receipts [20] and [65]. Indeed, research has shown that high levels of consumer trust encourage online purchase intentions [20] and [41] and help retain online customers [65], while the lack of it is the main reason individuals do not shop online [34]. There is also a growing recognition in industry circles that, as just argued, consumer trust facilitates e-Commerce (see US Better Business Bureau as reported in Cole [8]). Indeed, many dot.com failures have been attributed to the vendor's inability to create a strong trusting relationship with its customers [14], and, consistent with this observation, only 5% of VISA International clients appear to trust e-Commerce, a very low percentage compared with other financial transactions [49]. Yet, it must be recognized that the application of trust to e-Commerce does not apply perfectly to traditional business settings. Trust is an interpersonal determinant of behavior that deals with beliefs about the integrity, benevolence, ability, and predictability of other people [52] and [55]. However, in contrast to face-to-face commerce and to other applications of trust in the literature discussed below, there are typically no interpersonal interactions in e-Commerce, neither direct nor implied. Such interactions, or even cues relating to them, are notably missing from e-Commerce Websites [65]. How then does trust relate to e-Commerce where there is no interpersonal interaction and where there is no human agent toward whom this trust can be directed and on whose behavior it can be based? Given these unique circumstances, this study examines which of the established dimensions of trust in interpersonal relationships and in traditional Business-to-Consumer (B2C) commerce pertain to consumer trust in B2C Internet vendors (e-Trust). In doing so, this study extends the Familiarity and Trust Model of e-Commerce [20] in the following manner: (1) it embraces a multi-dimensional trust construct rather than a single dimension of trustworthiness to examine each dimension of trust on its own; and (2) it introduces a trust antecedent in the model which taps into the perception that, despite the lack of interpersonal interaction, there is still a sense of social presence on a Website. These objectives were addressed through two free simulation experiments. The initial study built and verified a scale that captures the dimensions of trust in purchasing books on the Internet. The second study then replicated and extended the first study by adding social presence as an antecedent of trust in purchasing flight tickets online. The experiments utilized the Websites of two major players in this market-space, Amazon.com and Travelocity.com, respectively. Amazon.com sells tens of millions of books, CDs, and DVDs to more than 17 million customers, according to its Website. Travelocity.com sells airline tickets and associated services. The Economist recently ranked Amazon.com as the most visited US Website and Travelocity.com as the 10th [78]. There is also a growing recent interest in Travelocity.com within the airline industry [56] and [57] making the results of this study of particular interest to the industry. The present study shows (1) that e-Trust is composed of four distinct beliefs dealing with the integrity, benevolence, ability, and predictability of the vendor; (2) that among these beliefs, integrity and predictability are the pertinent ones; (3) that the control variables disposition to trust and familiarity affect these beliefs; and (4) that e-Trust, especially the belief in benevolence, is increased by the perception of social presence in the Website.

Trust, according to Fukuyama [18], is the lubricant of trade and, in this way, determines the wealth of nations. The present study lends support to this assertion, but also qualifies it by showing that e-Trust is not a single monolith belief but a set of beliefs of varying importance depending on their relevance to the expected outcome. The study also hints at how e-Trust can be increased. Both findings are crucial in articulating a basic understanding of e-Trust for e-Commerce managers as well as for academics investigating this phenomenon.