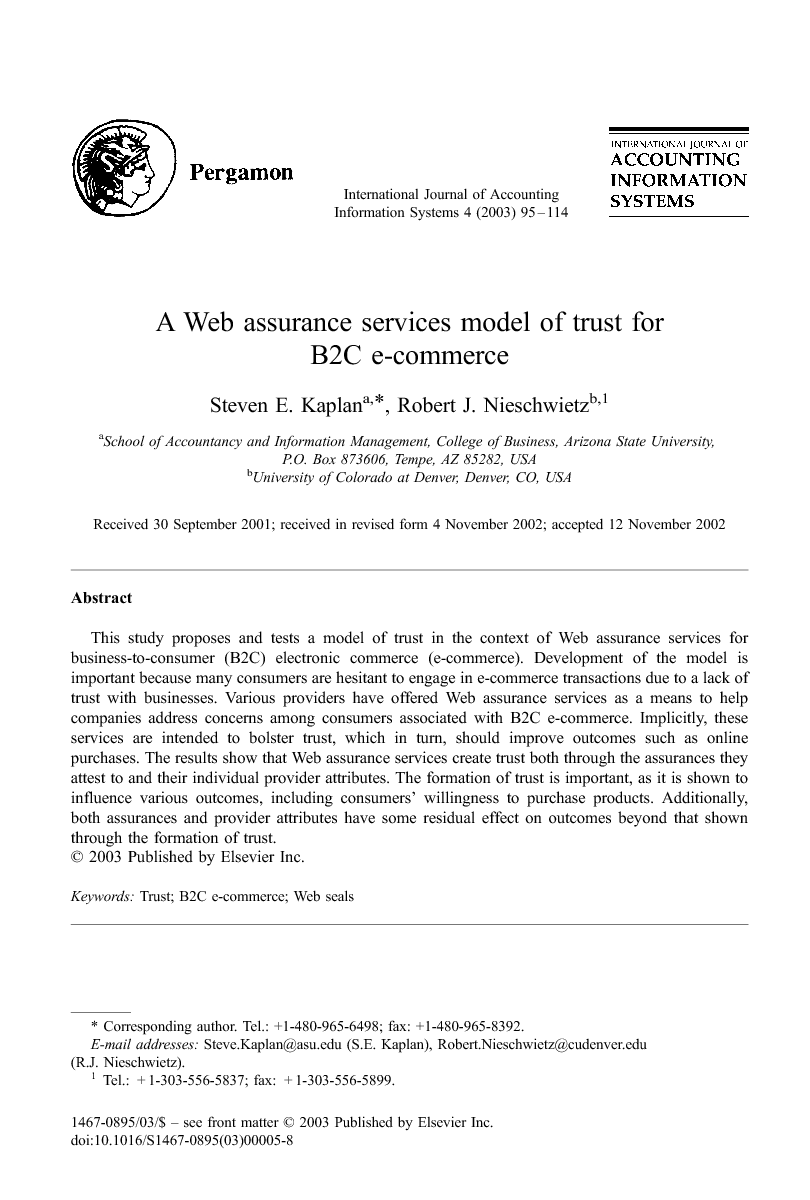 This study proposes and tests a model of trust in the context of Web assurance services for business-to-consumer (B2C) electronic commerce (e-commerce). Development of the model is important because many consumers are hesitant to engage in e-commerce transactions due to a lack of trust with businesses. Various providers have offered Web assurance services as a means to help companies address concerns among consumers associated with B2C e-commerce. Implicitly, these services are intended to bolster trust, which in turn, should improve outcomes such as online purchases. The results show that Web assurance services create trust both through the assurances they attest to and their individual provider attributes. The formation of trust is important, as it is shown to influence various outcomes, including consumers' willingness to purchase products. Additionally, both assurances and provider attributes have some residual effect on outcomes beyond that shown through the formation of trust.

With the recent widespread popularity of the Internet, business-to-consumer (B2C) e-commerce has quickly become a common medium for businesses to generate revenue. Already, B2C e-commerce has grown to an estimated US$26 billion in sales for 2000 (U.S. Census Bureau, 2001). However, e-commerce accounts for less than 1% of retail sales (U.S. Census Bureau, 2001). Even if projections of continued growth in e-commerce revenue are accurate, it appears that many consumers have not accepted e-commerce as a purchasing channel. Research has shown that insufficient trust represents a key reason for consumers to avoid purchasing products over the Internet American Institute of Certified Public Accountants (AICPA), 1997, Hoffman et al., 1999, Urban et al., 2000 and Crowell, 2001. Recently, a number of Web assurance services have been developed. These services are intended to alleviate consumers' trust-based concerns. These services include, among others: (1) BBBOnline Privacy, developed by the Better Business Bureau; (2) TRUSTe, developed by the Electronic Frontier Foundation; and (3) WebTrust, developed through joint efforts of the American Institute of Certified Public Accountants (AICPA) and the Canadian Institute of Chartered Accountants (CICA). Companies purchasing one of these services display a seal on their Web site. An analysis of these seals indicates that the number of companies purchasing a Web assurance service is increasing (Gogan, 1999). Alternatively, instead of relying upon an external group, a company may offer assurances about material contained on their Web site. Several studies have shown Houston and Taylor, 1999, Noteberg et al., 1999, Arnold et al., 2000, Hunton et al., 2000, Kovar et al., 2000, Mauldin and Arunachalam, 2002 and Lala et al., 2002, that in certain instances, displaying the seals positively influences consumer perceptions. The current study extends prior research by proposing and testing a trust-based model of B2C e-commerce. This model is tested using path analysis with latent variables related to assurance and provider attributes, trust beliefs, and outcomes. The proposed model is used to provide evidence related to three key questions. First, to what extent do the two aspects of Web assurance services, assurances and provider attributes, influence the formation of trust? Second, to what extent does the formation of trust influence consumers' outcome judgments? And third, taking into account the formation of trust, to what extent are the two aspects of Web assurance services, assurance and provider attributes, incrementally associated with outcome judgments? Evidence to address these questions is essential to gain a better understanding of how Web assurance services influence consumers' judgments and how future services can be tailored to meet consumers' needs. The remainder of the paper is organized as follows. The next section reviews the existing literature and proposes research questions. Section 3 describes the research design and instrument. Section 4 discusses the results. The final section discusses the contributions of the paper, implications of the findings, limitations, and future research.

With the growth of the Internet, B2C e-commerce has become a rapid area of expansion for many businesses. One barrier to success, however, has been a lack of a consumer confidence in Web sites developed by companies. To help overcome this limitation, a number of separate providers have developed Web assurance services to provide these Web sites with institution-based trust. This study proposed and tested a model of the means by which these services establish trust and influence consumers' behavior. As there have been relatively few papers in the area of Web assurance services, this study serves to make several contributions to the literature. First, it aids in our understanding of how Web assurance services affect trust formation by developing and testing a model of trust in an e-commerce environment. As trust is believed to be a critical factor in the success of Internet stores (Urban et al., 2000), this understanding aids in the effective design and implementation of Web assurance services. Results of the analysis show that both assurances and provider attributes are positively associated with various measures of trust. The formation of trust is important to understanding Web assurance services as trust has been shown through the path analysis to have a significant impact in determining willingness to purchase and perceived quality. While trust has been shown to be a significant factor in determining outcomes, the path analysis also reveals that the primary factor in determining outcomes is assurance. Assurance has a significant influence on outcomes both as a latent variable, and when examined with manifest variables for willingness to purchase, perceived quality, and risk. Additionally, assurance was found to have an indirect effect on outcomes through its significant influence on trust. Practical implications of this finding are that Web assurance providers should focus more on the assurances that they provide, and less on their personal attributes, as assurance appears to be the key determinant of consumers' behavior. And last, this study further examines the quality expectation gap reported by Houston and Taylor (1999). The results validate that Web seals are associated with forming improved expectations regarding quality. However, the analysis shows this result applies to all Web assurance seals, not just WebTrust. This presents a potential problem for all Web assurance providers in communicating the coverage of their seals to consumers. It should be noted that this study only examines consumers' attitudes towards various Web assurance services and intent to purchase products, not actual behavior. While intent has generally been found to be the strongest predictor of behavior, it may not accurately predict actual behavior Eagly and Chaiken, 1993 and Ajzen and Fishbein, 1980. Additionally, the study only looks at the effects of Web assurance services on a specific product, clothing. Consumers' perceptions, behavior, and expectations may vary when presented with other products (e.g. Hunton et al., 2000). Thus, future studies should examine consumers' perceptions across a range of products. While this study aids in our understanding of Web assurance services, several key questions still need to be addressed by future research. First, what type of assurance do consumers value the most? Is it privacy, security, business practices and transaction integrity, or availability? Or have the current Web assurance services failed to deliver what consumers demand? For Web assurance services to be valued by businesses, they must be able to meet the demands of consumers. Another question that remains is whether Web assurance services will be valued in the future As the Internet is still in its infancy, a number of changes can take place that will affect the market for Internet services. Government regulation, increased credit card protection, and the growing expertise of Internet users are just a few of the factors that could alter the benefits derived from Web assurance services. For Web assurance services to increase in value, consumers must become more educated on what these services do, as well as what they do not do. Future research can examine ways to educate consumers, and how this will affect consumers' perceptions of Web assurance services and the Web sites they represent. Educating consumers should help Web assurance services by decreasing the gap between what the services provide, and what the consumers expect.