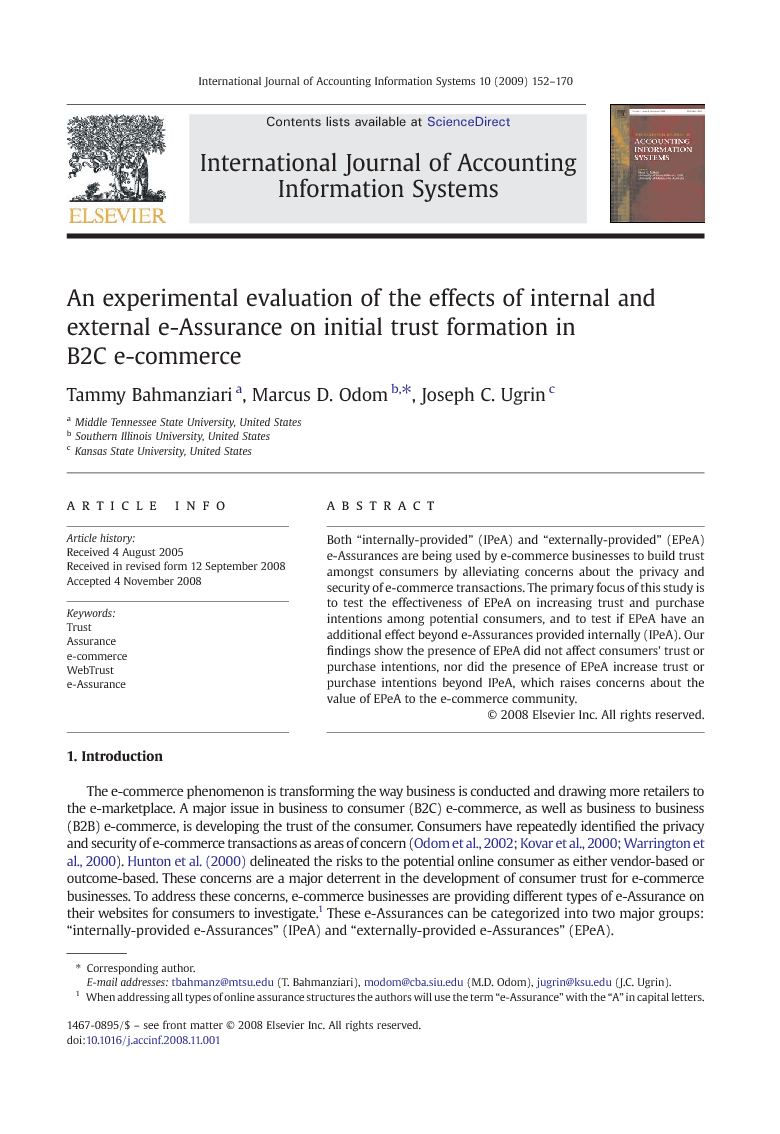 Both “internally-provided” (IPeA) and “externally-provided” (EPeA) e-Assurances are being used by e-commerce businesses to build trust amongst consumers by alleviating concerns about the privacy and security of e-commerce transactions. The primary focus of this study is to test the effectiveness of EPeA on increasing trust and purchase intentions among potential consumers, and to test if EPeA have an additional effect beyond e-Assurances provided internally (IPeA). Our findings show the presence of EPeA did not affect consumers' trust or purchase intentions, nor did the presence of EPeA increase trust or purchase intentions beyond IPeA, which raises concerns about the value of EPeA to the e-commerce community.

The e-commerce phenomenon is transforming the way business is conducted and drawing more retailers to the e-marketplace. A major issue in business to consumer (B2C) e-commerce, as well as business to business (B2B) e-commerce, is developing the trust of the consumer. Consumers have repeatedly identified the privacy and security of e-commerce transactions as areas of concern (Odom et al., 2002, Kovar et al., 2000 and Warrington et al., 2000). Hunton et al. (2000) delineated the risks to the potential online consumer as either vendor-based or outcome-based. These concerns are a major deterrent in the development of consumer trust for e-commerce businesses. To address these concerns, e-commerce businesses are providing different types of e-Assurance on their websites for consumers to investigate.1 These e-Assurances can be categorized into two major groups: “internally-provided e-Assurances” (IPeA) and “externally-provided e-Assurances” (EPeA). Internet-based retailing continues to grow at double-digit rates (U.S. Census, 2008) and e-Assurances are particularly important to new e-commerce retailers, since consumers do not have experience with the retailers that they can rely on to form opinions and trust. Thus, initial trust in the website of a new e-commerce retailer is formed by characteristics of the website and the e-Assurances provided. Without high initial trust, new e-commerce websites will not sell products or retain customers, who will migrate to websites they find more trustworthy. And, due to the growth in e-commerce, there will not be a shortage of other e-commerce websites for customers to visit. The primary question to be addressed in this study is whether or not an EPeA actually adds to the initial trust and purchase intentions of the online consumer over and above any internally provided e-Assurance or IPeA. Given the cost of obtaining the EPeA, a significant amount of risk relief must be provided by these assurances to entice the e-commerce business to contract the services of an EPeA provider. IPeA are e-Assurances managed by the online retailer through the use of different combinations of assurance structures that are not verified by an independent source. These assurance structures focus on the retailers' company policies and disclosures. They are designed to provide guarantees and safety nets, and reduce uncertainty for the potential consumer. Some examples of these IPeA are privacy policies, guarantees, free shipping, return policies, contact information and frequently-asked-question features. This study also views certain third-party assurance seals as IPeA. Some of the third-party seals displayed by B2C online retailers are based on self-reporting of adherence to the guidelines of the certification vendor. In this study, due to the self-reporting nature of this type of assurance seal, these seals are classified as IPeA. Some examples of IPeA offered by third-party assurance providers are seals from Truste, VeriSign and BBB Online. EPeA is an assurance provided by a third-party vendor only after an independent evaluation of the online retailer's e-commerce website and related activities. This type of e-Assurance involves significant testing and includes a certificate from the third party. It stands to reason that third-party certifications that come from independent sources should provide assurance that is over and above the internally-provided assurance structures on the website, and thus result in more trust being developed.2 The expected effect of this type of e-Assurance is analogous to an external audit providing credibility to a company's financial statements. An example of an EPeA is the Web Trust seal sponsored by the AICPA. The primary reason for the AICPA adopting and actively promoting the WebTrust seal and related services is that CPAs have already achieved recognition for the ability to provide thorough independent evaluations. The financial analysts surveyed in Hunton's study perceived that the presence of the WebTrust seal would increase consumer faith in the online retailer by decreasing perceived vendor-based and outcome-based risks (Hunton et al., 2000). Yet, despite several studies that have experimentally evaluated the value of the WebTrust seal with favorable results (Odom et al., 2002, Kovar et al., 2000, Kaplan and Nieschwietz, 2003b, Portz et al., 2001, Noteberg et al., 2003, Hunton et al., 2000 and Lala et al., 2002), it has not had commercial success. To examine whether or not the EPeA increases the level of initial trust beyond that provided by IPeA, an experiment was conducted using a 2 × 2 factorial design with IPeA and EPeA as the factors. The participants viewed one of four fictitious websites and answered questions about their trust and purchase intentions regarding the website. The results demonstrate that EPeA do not increase initial trust and purchase intentions above the initial trust and purchase intentions garnered by IPeA. Nor do the EPeA tested in this study provide any compensatory effect on initial trust or purchase intentions where IPeA are absent. The results of this study call into question the value of EPeA, as defined in this study, and the future of AICPA's WebTrust seal and related services. The remainder of the paper will provide a review of the relevant e-Assurance and trust literature from which hypotheses will be developed (a comprehensive summary of published e-Assurance research is presented in Appendix A). This will be followed by an explanation of the research methodology. Subsequently, the data analysis will be presented, followed by a discussion of the results and future directions.

This study provides evidence for the value of IPeA in fostering initial trust and purchase intentions for online transactions, but fails to find any value in EPeA, specifically the WebTrust seal. This was true even though all the participants in the study had been exposed to the EPeA and its differences from IPeA. This result calls into question the value placed on the EPeA by online consumers. The participants developed both initial trust and purchase intentions based upon IpeA, even though the validity of those e-Assurance structures was not verified by a third party. Our findings were divergent from existing findings, particularly Lala et al. (2002). The most obvious explanation for this is the difference in the dependent variable: we examined trust and purchase intentions rather than actual behavior. A second explanation may be the execution of the experiment and representation of IPeA in particular, discussed below. A third explanation is that even though we randomly assigned treatments, there was a lack of control variables beyond the factors controlled in the experimental design. In addition, there are other plausible explanations for the results that lead into interesting questions for future research. The lack of a significant main effect for EPeA suggests that EPeA alone do not enhance trust or purchase intentions. This may be a function of marketing the service. Leading into hypothesis one, we suggested that a significant EPeA would only result if participants had positive knowledge of the EPeA, congruent with both cognitive-based and institutional-based trust. We attempted to control this in the design by introducing EPeA to participants in the course of the regular classroom setting prior to the experiment. This introduction gave the participants general knowledge about the EPeA utilized in the study and its differences from IPeA, but it did not attempt to market or persuade participants' opinions about the EPeA. It can be conjectured that strong efforts to influence individuals' perceptions about the value of EPeA could reverse the results found here. This is a point for future research that if confirmed, could be critical for those offering EPeA services. Next it can be concluded that the e-Assurances offered by the IPeA on the website adequately created a sense of security for the participants, and the additional assurance offered by the EPeA did not add to this. This is an important finding, since online vendors may conclude that EPeA does not add significantly to the overall trust and purchase intentions of the potential consumer over and above internally-provided retailer disclosures. In other words, IPeA were the most salient in shaping participants' trust, and accounted for the bulk of the variance in trust, leaving little to be influenced by the addition of EPeA. To explain this in terms of cognitive-based trust, the trust formation between two unfamiliar parties is based on the appearance and belief that everything seems to be in the proper order (Lewis and Weigert, 1985). For this experiment, the IPeA likened the experimental websites to the websites for which the participants had prior experience, therefore creating a sense that things were “ordered properly,” or as McKnight et al., (2002) posited, that the website looked “normal” to the subject. Therefore, the IPeA on the websites had a significant effect on trust and purchase intentions. The addition of the EPeA did not significantly add to the appearance and belief that things were ordered properly or normal. Again, it would be interesting to see if intense marketing of EPeA would change these results. Would a stronger marketing effort make EPeA more normal to consumers? We would also suggest that additional studies that aid in determining the best ways to increase the reputation of the EPeA provider are needed. It would be interesting to see if the familiarity of the EPeA increases the value of the EPeA in the mind of the potential online consumer. We followed up on this result with an examination of the importance of each of the assurance structures used in the study which might give insight into what assurances are viewed as being more “normal.” Each of the assurance structures used on the websites was rated by the participants according to importance. A rating of 10 was most important and a rating of 1 was least important. Table 6 discloses the mean ratings for each of the assurance structures. Not unexpectedly, the participants rated security and privacy policies most highly. The first five in order of importance are all IPeA. The EPeA, the WebTrust seal, ranked seventh out of ten in importance.