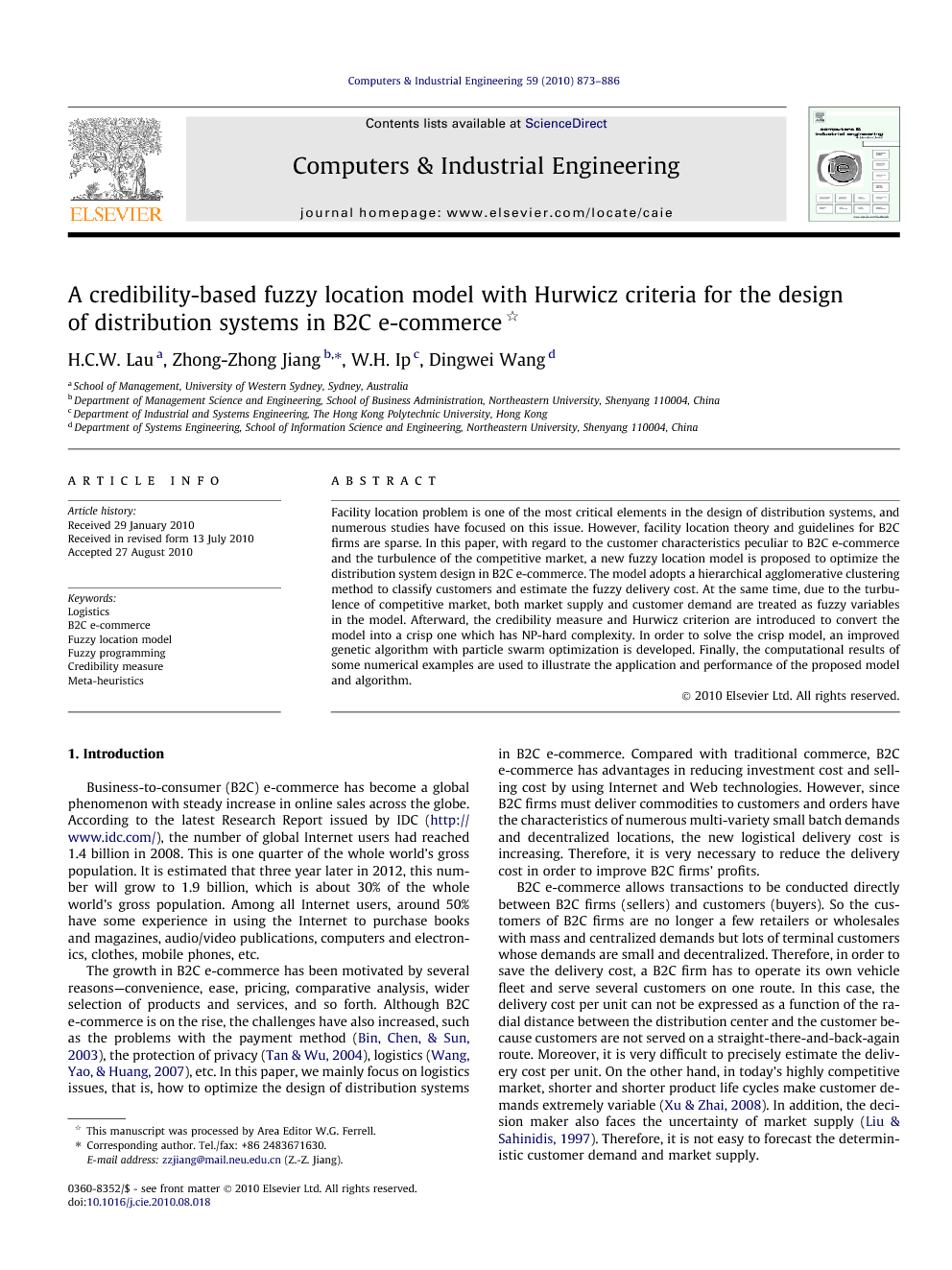 Facility location problem is one of the most critical elements in the design of distribution systems, and numerous studies have focused on this issue. However, facility location theory and guidelines for B2C firms are sparse. In this paper, with regard to the customer characteristics peculiar to B2C e-commerce and the turbulence of the competitive market, a new fuzzy location model is proposed to optimize the distribution system design in B2C e-commerce. The model adopts a hierarchical agglomerative clustering method to classify customers and estimate the fuzzy delivery cost. At the same time, due to the turbulence of competitive market, both market supply and customer demand are treated as fuzzy variables in the model. Afterward, the credibility measure and Hurwicz criterion are introduced to convert the model into a crisp one which has NP-hard complexity. In order to solve the crisp model, an improved genetic algorithm with particle swarm optimization is developed. Finally, the computational results of some numerical examples are used to illustrate the application and performance of the proposed model and algorithm.

With regard to the limitations that occur in existing facility location models less considering the characteristics of B2C firms in the competitive market, this paper proposes a new fuzzy location model to optimize the distribution system design in B2C e-commence. The solutions derived from the model can be used to support the decisions regarding distribution center location for B2C firms. The major contributions of this paper are discussed below. First, the proposed model considers the characteristics of B2C firms in the competitive market, and fuzzy variables are employed in the model to represent the uncertainty of delivery cost, market supply and customer demand. It can still work well in spite of the lack of historical data. In addition, a more reasonable setup cost function of the distribution center is presented in the model, and it overcomes the current literature limitations which neglecting to optimize the capacity of distribution centers. So the model in this paper is more suitable for the location of distribution centers in B2C e-commerce. Second, the credibility measure and Hurwicz criterion are introduced to convert the proposed model into a crisp model. Compared to the possibility measure, the credibility measure has a self-duality property which is absolutely necessary in both theory and practice. And the Hurwicz criterion is more flexible than optimistic or pessimistic criteria. Therefore, the proposed model can provide better theoretical directions for decision makers. Third, an improved genetic algorithm with particle swarm optimization, i.e., GAPSO-II, is developed to solve the crisp model. Furthermore, extensive computational experiments on some numerical examples show GAPSO-II is more competitive and efficient to solve the crisp model than GAPSO-I and TSGA. In terms of future research, two directions have been identified. First, the proposed model can be extended to multiple objectives, such as maximizing the total service level, minimizing total delivery time and so on. In this case, due to the limited resources and different goals of decision makers, the extended model can be modified or adjusted by adding objectives or constraints before it is applied to solve real problems. Second, we intend to develop a multi-objective evolution algorithm with respect to the extended model, which can obtain a Pareto optimal solution set for decision makers instead of only one optimal solution. Therefore, the extended model and algorithm will become more universal and more convenient to use for decision makers.