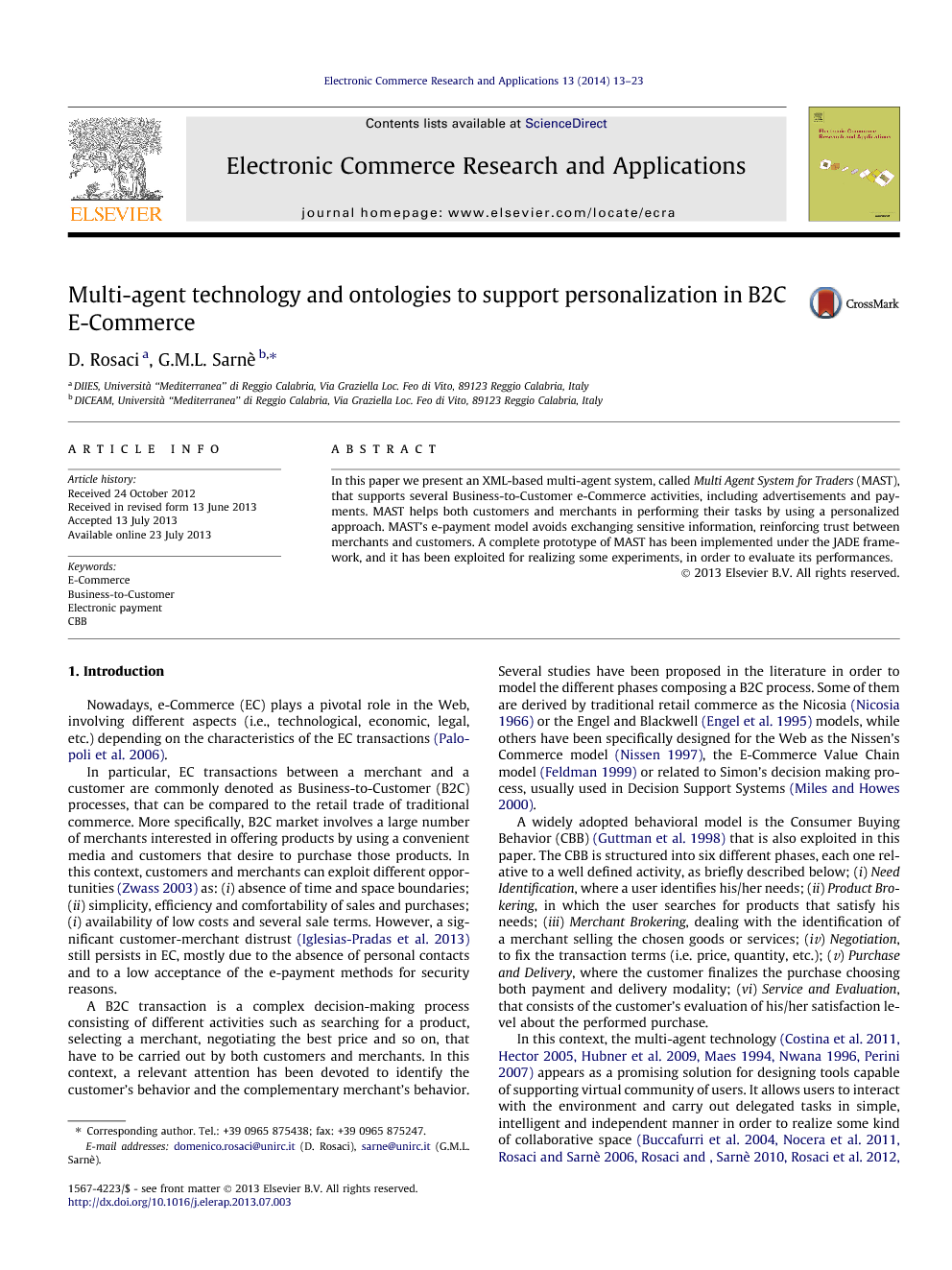 In this paper we present an XML-based multi-agent system, called Multi Agent System for Traders (MAST), that supports several Business-to-Customer e-Commerce activities, including advertisements and payments. MAST helps both customers and merchants in performing their tasks by using a personalized approach. MAST’s e-payment model avoids exchanging sensitive information, reinforcing trust between merchants and customers. A complete prototype of MAST has been implemented under the JADE framework, and it has been exploited for realizing some experiments, in order to evaluate its performances.

Nowadays, e-Commerce (EC) plays a pivotal role in the Web, involving different aspects (i.e., technological, economic, legal, etc.) depending on the characteristics of the EC transactions (Palopoli et al. 2006). In particular, EC transactions between a merchant and a customer are commonly denoted as Business-to-Customer (B2C) processes, that can be compared to the retail trade of traditional commerce. More specifically, B2C market involves a large number of merchants interested in offering products by using a convenient media and customers that desire to purchase those products. In this context, customers and merchants can exploit different opportunities (Zwass 2003) as: (i) absence of time and space boundaries; (ii) simplicity, efficiency and comfortability of sales and purchases; (i) availability of low costs and several sale terms. However, a significant customer-merchant distrust (Iglesias-Pradas et al. 2013) still persists in EC, mostly due to the absence of personal contacts and to a low acceptance of the e-payment methods for security reasons. A B2C transaction is a complex decision-making process consisting of different activities such as searching for a product, selecting a merchant, negotiating the best price and so on, that have to be carried out by both customers and merchants. In this context, a relevant attention has been devoted to identify the customer’s behavior and the complementary merchant’s behavior. Several studies have been proposed in the literature in order to model the different phases composing a B2C process. Some of them are derived by traditional retail commerce as the Nicosia (Nicosia 1966) or the Engel and Blackwell (Engel et al. 1995) models, while others have been specifically designed for the Web as the Nissen’s Commerce model (Nissen 1997), the E-Commerce Value Chain model (Feldman 1999) or related to Simon’s decision making process, usually used in Decision Support Systems (Miles and Howes 2000). A widely adopted behavioral model is the Consumer Buying Behavior (CBB) (Guttman et al. 1998) that is also exploited in this paper. The CBB is structured into six different phases, each one relative to a well defined activity, as briefly described below; (i) Need Identification, where a user identifies his/her needs; (ii) Product Brokering, in which the user searches for products that satisfy his needs; (iii) Merchant Brokering, dealing with the identification of a merchant selling the chosen goods or services; (iv) Negotiation, to fix the transaction terms (i.e. price, quantity, etc.); (v) Purchase and Delivery, where the customer finalizes the purchase choosing both payment and delivery modality; (vi) Service and Evaluation, that consists of the customer’s evaluation of his/her satisfaction level about the performed purchase. In this context, the multi-agent technology Costina et al., 2011, Hector, 2005, Hubner et al., 2009, Maes, 1994, Nwana, 1996 and Perini, 2007 appears as a promising solution for designing tools capable of supporting virtual community of users. It allows users to interact with the environment and carry out delegated tasks in simple, intelligent and independent manner in order to realize some kind of collaborative space Buccafurri et al., 2004, Nocera et al., 2011, Rosaci and Sarnè, 2006, Rosaci and Sarnè, 2010, Rosaci et al., 2012, Tsvetovatyy and Gini, 1996 and Ye et al., 2001. Software agents have been fruitfully applied also in EC He et al., 2003, Lax and Sarné, 2006, Liu and Ye, 2001, Rosaci and Sarnè, 2012b and Ursino et al., 2004 in order to design systems characterized by high levels of automation. Currently, only few agent systems cover more than one phase of a B2C process, while the most part of them provide only a rough and non-integrated support for a fixed typology of B2C activities. However, in developing such agent systems it is crucial that customers and merchants can be fully supported along all the tasks of a B2C process with a high automation level by attending them step by step, in a safe, reliable, and personalized way. To this purpose, there is the need to obtain, maintain and update information about both customers’ interests and preferences and merchant’s trading data using suitable profiles De Meo et al., 2007 and Rosaci and Sarnè, 2012b and in such activity the results obtained by using software agents appears more effective than those obtained by other approaches. The customers’ profiles can be realized either on the merchant or the customer side; each of the two possibility implies a different representation of the interests and preferences. Indeed, in the first case only the activities performed by the customer on that merchant’s EC site are representable; differently, using the second alternative, it is possible to obtain a complete representation of the whole customer’s B2C history. Furthermore, when a customer starts to use a system, his/her profile will be empty, and in order to provide him/her with a suitablypersonalized support it will be necessary to provide him/her with an initial profile to solve such a cold start problem. This initial profile can be obtained by exploiting rating data directly provided by users or automatically elicited by the system monitoring his/her activities. Finally, the presence of a network in the payment phase introduces some critical issues, absent in traditional payment systems, that requires the development of specific e-payment schemas in order to offer a trusted environment.

This paper describes MAST, an XML-based multi-agent system to support customers and merchants in an integrated and personalized way, taking into account their interests based on the behaviors shown during their B2C activities, represented as in CBB model. MAST agents build, update and exploit users’ profiles able to provide high quality representations of customers’ orientations by suitably weighting the different activities performed in B2C processes arranged as in CBB model. More in detail, MAST: (i) considers the relevance of the different CBB activities to build high quality user profiles; (ii) exploits the advantages provided by XML in the formalization, representation and communication issues; (iii) adopts a secure centralized payment scheme based on existing Financial Institutions and one-time account numbers. An experimental campaign has been carried out using a complete JADE-based prototypal MAST implementation focused on a small B2C scenario. The results have confirmed our expectations and the benefits of the proposed platform. As for ongoing research, a development of MAST is planned both by investigation on the best setting of all the MAST parameters and by the introduction of different behavioral models taking in account emerging behaviors in the B2C area, such as formation of coalitions and the EC-site visiting De Meo et al., 2007, Rosaci and Sarnè, 2012b and Rosaci and Sarnè, 2013.