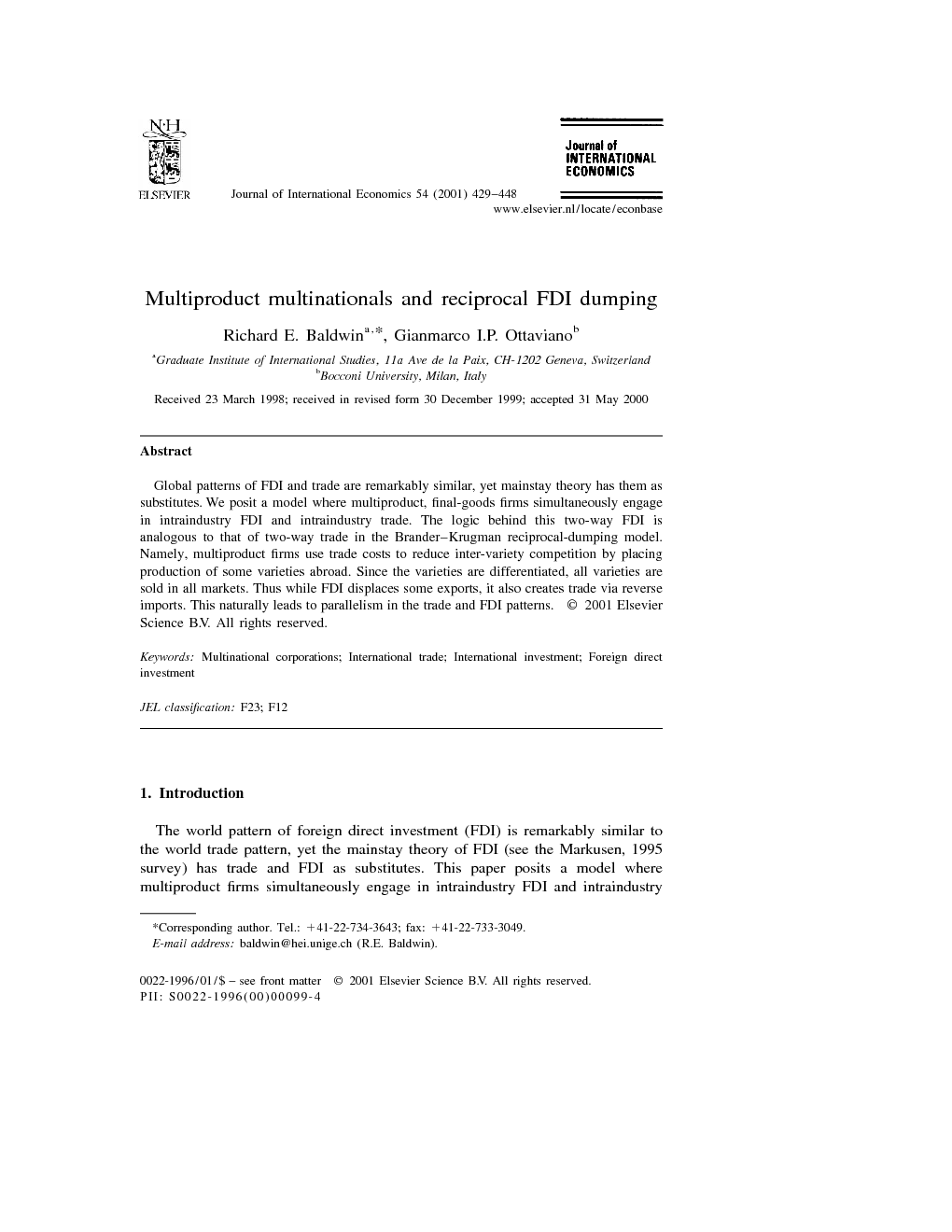 Global patterns of FDI and trade are remarkably similar, yet mainstay theory has them as substitutes. We posit a model where multiproduct, final-goods firms simultaneously engage in intraindustry FDI and intraindustry trade. The logic behind this two-way FDI is analogous to that of two-way trade in the Brander–Krugman reciprocal-dumping model. Namely, multiproduct firms use trade costs to reduce inter-variety competition by placing production of some varieties abroad. Since the varieties are differentiated, all varieties are sold in all markets. Thus while FDI displaces some exports, it also creates trade via reverse imports. This naturally leads to parallelism in the trade and FDI patterns.

The world pattern of foreign direct investment (FDI) is remarkably similar to the world trade pattern, yet the mainstay theory of FDI (see the Markusen, 1995 survey) has trade and FDI as substitutes. This paper posits a model where multiproduct firms simultaneously engage in intraindustry FDI and intraindustry trade in a manner that naturally leads to parallelism in the trade and FDI patterns. The model cannot explain all aspects of the trade and FDI correlation, and it is clearly irrelevant to some industries. It is, however, based on a novel motive for FDI. Before delineating the logic of our model, we review some facts on the similarity of the FDI and trade patterns. The similarity begins with aggregate figures. When it comes to goods trade, the advanced industrialised nations are both the biggest exporters and their own best customers. The same is true of foreign direct investment, according to Hummels and Stern (1994). The European Union, for example, is both the largest ‘home’ and the largest ‘host’ region, accounting for about 40% of global flows; the United States, with about a quarter of world FDI flows, is the largest single host nation and the largest single home nation for FDI (UNCTAD, 1997). The similarity extends to the composition of the flows. For instance, intraindustry trade among rich nations accounts for the bulk of world trade. Similarly, there is a great deal of two-way foreign direct investment among rich nations, even within industries. The Markusen (1995) survey of multinationals, for instance, includes the importance of intraindustry FDI (IIFDI) as one of six stylised facts. Recent work by Greenaway et al. (1998) strengthens this. These authors use the Grubel–Lloyd index to construct measures of intraindustry FDI for US trade partners.1 Using trade data aggregated into matching categories, they also calculate classic intraindustry trade (IIT) indices. As Table 1 shows, there is remarkable similarity between the IIT and IIFDI indices, at least at this level of aggregation (corresponding to between the two and three digit SIC level) and for these nations.Additionally, the industries in which we see a lot of intraindustry trade among similar nations are also typically the industries in which there is a great deal of intraindustry FDI, according to Rugman (1985). Anecdotal evidence can be found in sectors such as transport equipment, chemicals, pharmaceuticals, and processed foods. Recent empirical work provides a more detailed picture of this similarity, at least for some nations and some sectors. Greenaway et al. (1998), for instance, use data on US–UK bilateral trade and foreign affiliate sales to calculate ‘extended intraindustry trade’ indices on a sectoral level. The extended index accounts for two-way ‘sales’ stemming from both exports and foreign affiliate sales. This total is decomposed into a measure of IIT, a measure of IIFDI, and an interaction term that arises from the algebraic decomposition. The sectoral correlation of the IIT and IIFDI measures is not strikingly positive, and some sectors are clearly dominated by either trade or investment. The two-way commerce in construction, for example, is almost all FDI, while in ‘other transport equipment’ it is mainly trade. Importantly though, they do find many sectors displaying substantial amounts of both intraindustry trade and intraindustry FDI (e.g., electrical machinery, audio, video and communications, electronic components, textiles and apparel, and miscellaneous plastic products). Finally, a related branch of the literature establishes that trade and FDI, at some level of aggregation, are complements rather than substitutes. The classic papers — Swedenborg (1979) and Lipsey and Weiss (1981) — find foreign affiliate sales increase exports from the home country. Blomström et al. (1988) show that trade is not a substitute for investment, even at the firm level. Subsequent studies such as Head and Ries (1999) have largely confirmed this. Blonigen (1999) finds a more subtle result for Japanese FDI in the US using detailed, product-level trade data (e.g. laminated safety glass for autos) together with Japan-to-US FDI data disaggregated into car production and car parts production. He finds that FDI in car parts substitutes for Japanese exports of car parts, but FDI in car production is complementary to Japanese exports of cars. He also finds that for some final consumer products (e.g. golf balls and grand pianos), FDI and trade are substitutes.

Global MNC activity is an amalgamation of several very distinct types that must be explained by several very distinct models. This paper focuses on the cross hauling of foreign investment that generates reciprocal trade in differentiated final products. It posits a model that differs sharply from the standard proximity-versus-scale model. In our model, firms simultaneously engage in intraindustry FDI and intraindustry trade in a manner that naturally leads to similarity in the trade and FDI patterns. The two-way FDI is driven by forces analogous to those driving trade in the reciprocal-dumping model of Brander and Krugman (1983). Specifically, firms producing multiple differentiated varieties have an incentive to use trade costs to reduce inter-variety competition. They do this by placing production of some varieties abroad. Since the varieties are differentiated, all varieties are sold in all markets, regardless of where they are produced. While FDI does displace some exports, it also creates some reverse imports. Consequently, the pattern of trade and investment are intrinsically similar. Our model is not intended to explain all types of FDI or all aspects of the trade and FDI correlation. Nor is the model appropriate for industries in which intermediate goods and vertical integration are dominant features. It is, however, based on a novel motive for FDI and it addresses two-way trade and investment in final-goods sectors.