عنوان انگلیسی
Social dumping and relocation: is there a case for imposing a social clause?
دانلود فوری مقاله + سفارش ترجمه 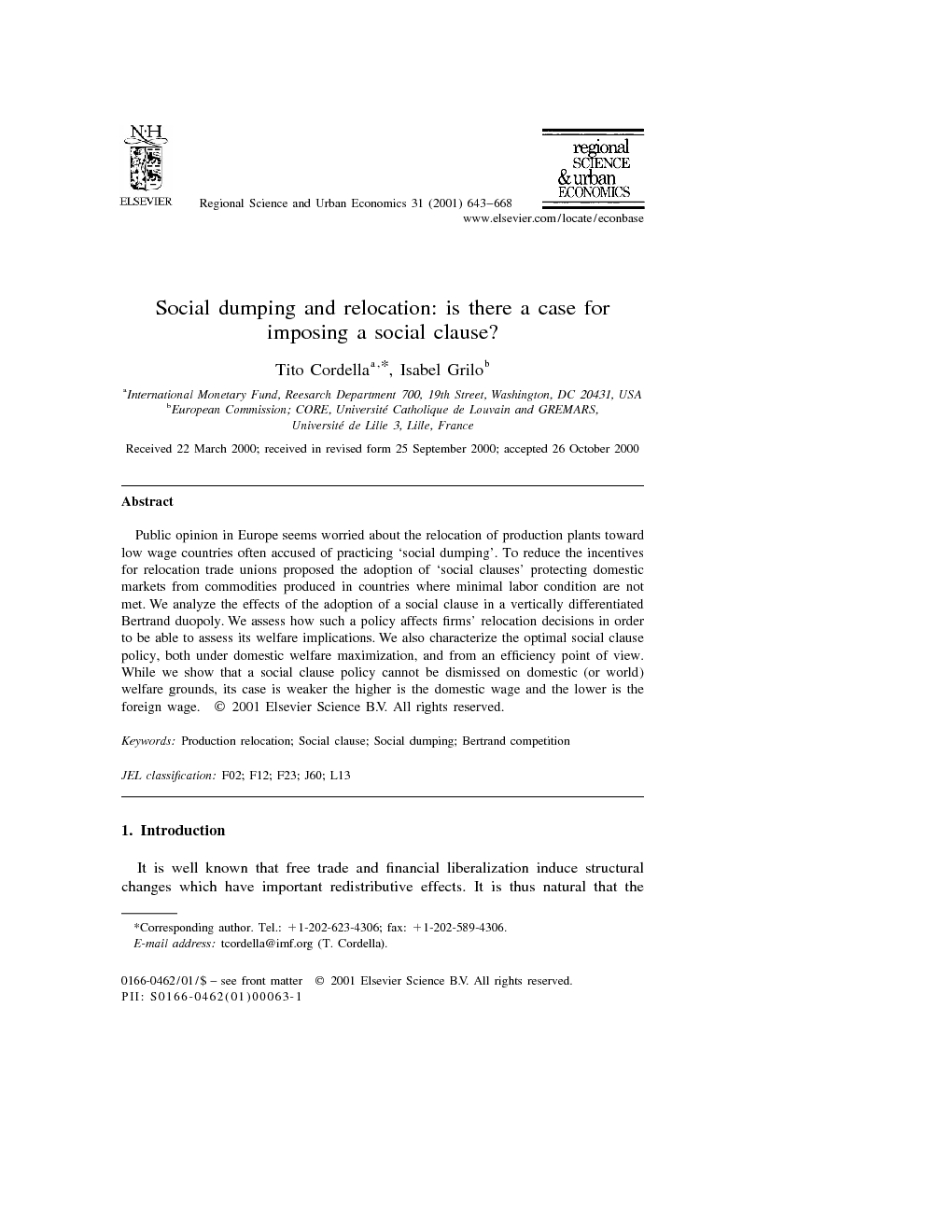 Public opinion in Europe seems worried about the relocation of production plants toward low wage countries often accused of practicing ‘social dumping’. To reduce the incentives for relocation trade unions proposed the adoption of ‘social clauses’ protecting domestic markets from commodities produced in countries where minimal labor condition are not met. We analyze the effects of the adoption of a social clause in a vertically differentiated Bertrand duopoly. We assess how such a policy affects firms’ relocation decisions in order to be able to assess its welfare implications. We also characterize the optimal social clause policy, both under domestic welfare maximization, and from an efficiency point of view. While we show that a social clause policy cannot be dismissed on domestic (or world) welfare grounds, its case is weaker the higher is the domestic wage and the lower is the foreign wage.

The increasing magnitude taken by the phenomenon of relocation in the recent years has created a growing concern with its consequences on labor market. It is clear that the imposition of a social clause would tend to protect workers’ revenues in high wage countries28 by either impeding firms’ relocation or, at least, by reducing the number of national jobs lost. Moreover, under the assumptions of our model, the imposition of certain levels of social clause also benefits foreign workers (when the social clause is effective rather than dissuasive). Does this mean that we should expect this form of protection to be supported by economic agents and institutions other than international labor organizations? Even if both domestic and foreign workers may benefit from the imposition of a social clause, the case for such a measure cannot be made without considering its impact on other economic agents’ welfare. In particular, we have shown that consumers lose from such a policy while firms can either gain or lose. A first step toward ascertaining the overall effect of the social clause policy is to look at its effect on the sum of agents surpluses. We have done this both at domestic and at world level and identified efficiency with world surplus maximization. Though the main conclusion of our analysis is that a social clause policy cannot be dismissed on efficiency grounds, we have shown that the absence of a social clause is more likely to be optimal (both on domestic and world welfare grounds) towards countries with significantly lower labor costs, the natural candidates for such a policy. Results presenting a similar flavor can be found in Drèze and Sneessens (1994). In a simple competitive general equilibrium framework, where transfers take the form of unemployment benefits, they show that a protectionist policy can be defended on domestic welfare grounds only when labor conditions do not differ too much between countries. Our result sheds some doubts on the case for a social clause put forward by trade unions. In fact, such a policy seems more appealing towards countries presenting relatively small labor cost differentials, while it can be hardly defended towards the countries which trade unions would like to see it imposed on. Of course, this does not imply that actions aiming at imposing the respect of workers rights cannot be defended as such or that the use of a social clause cannot be justified on purely moral grounds.29 Clearly, the fact that we used stylized assumptions and worked in a partial equilibrium set-up may have led us to misperceive or ignore some effects. What are these effects, and how would they affect the welfare implications of a social clause? There are at least three issues that deserve to be discussed. First, our model is characterized by a fixed total demand and one might argue that a more realistic description would allow for a demand expansion induced by the lower costs associated with the firms’ relocation. By not having allowed this effect, we somehow underestimated the positive welfare impact of relocation, and thus left more room for defending the imposition of a social clause. Second, by taking domestic workers’ surplus to be the whole wage bill, we may have over-estimated the negative impact of firms’ relocation. Again, by doing so we created a more favorable situation for the imposition of a social clause. On the other hand, in studying world surplus maximization we assumed that only the rent from the social clause enters the foreign workers’ surplus. Had we assumed the total wage bill as the rent, we would have expanded the case for a social clause. Third, because of the partial equilibrium analysis, we ignored two types of income effects: one the one hand, the income effects on other sectors’ domestic demand; and on the other those on foreign demand, possibly including the potential expansion of the domestic export sector induced by this foreign income effect. Were the effects of increased consumption taken into account the gains from relocation would probably be greater, and the scope for the imposition of a social clause would be reduced.