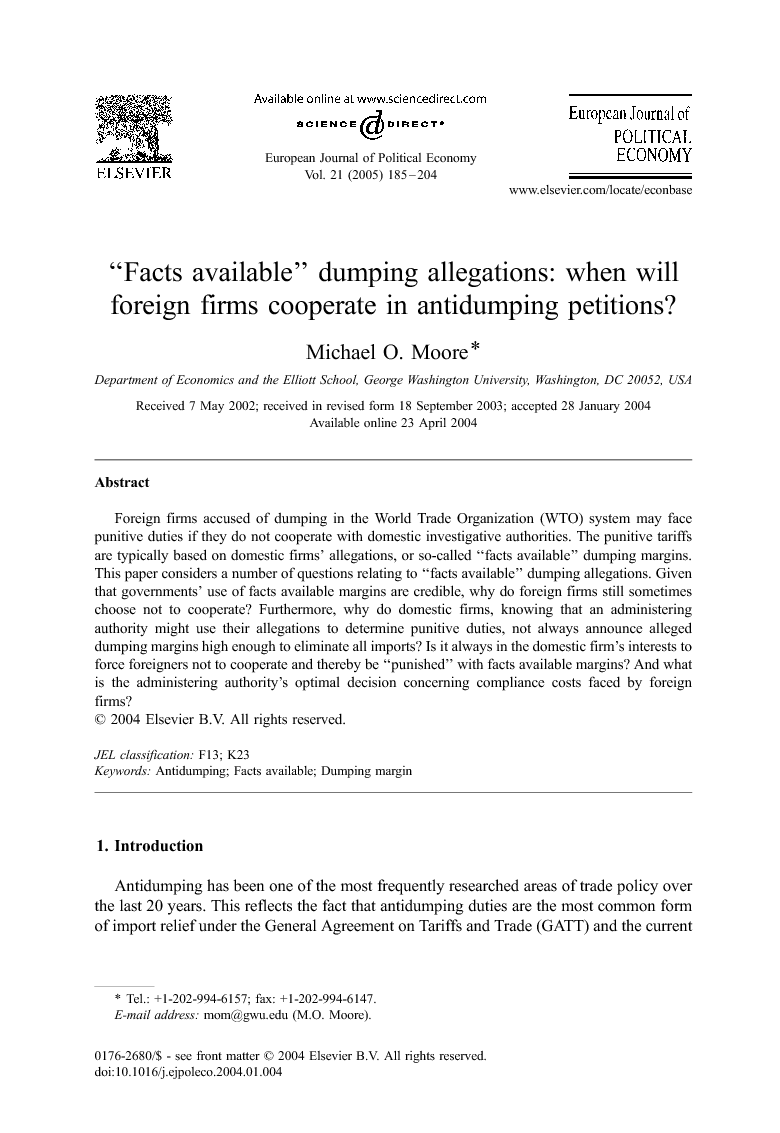 Foreign firms accused of dumping in the World Trade Organization (WTO) system may face punitive duties if they do not cooperate with domestic investigative authorities. The punitive tariffs are typically based on domestic firms' allegations, or so-called “facts available” dumping margins. This paper considers a number of questions relating to “facts available” dumping allegations. Given that governments' use of facts available margins are credible, why do foreign firms still sometimes choose not to cooperate? Furthermore, why do domestic firms, knowing that an administering authority might use their allegations to determine punitive duties, not always announce alleged dumping margins high enough to eliminate all imports? Is it always in the domestic firm's interests to force foreigners not to cooperate and thereby be “punished” with facts available margins? And what is the administering authority's optimal decision concerning compliance costs faced by foreign firms?

This paper provides tentative conclusions regarding issues that have been overlooked in the antidumping literature in economics. The incentives for foreign firms to cooperate in antidumping investigations have been analyzed when the firms face the possibility that an administering authority will use allegations by the domestic petitioner when setting antidumping duties. The need for study in this area is evident given the very high margins that have at times arisen in US antidumping cases when so-called “facts available” have been used by the Department of Commerce. A number of questions have been addressed. Why do foreign firms sometimes not cooperate in antidumping investigations given the clear authority for governments to counter with punitive tariffs? In addition, should domestic firm always allege prohibitive tariffs, given the possibility that the domestic authority might use these allegations against noncooperative firms. Finally, what are the domestic authority's motivations and strategies when setting compliance costs? Within the framework introduced here, foreign firms have ambiguous and conflicting incentives concerning possible cooperation. On one hand, high compliance costs reduce the attractiveness of pursuing a “cooperative” antidumping path but a decision to forgo cooperation means that the “stick” of facts available margins may be placed on their imports. A foreign firm may choose not to cooperate even if it is certain to win its case as long as compliance costs are positive. This might be particularly problematic for small firms where compliance costs are high relative to any expected benefits from cooperation. In general, foreign firms that do not cooperate may have nothing “to hide.” Instead, they may simply be responding to the incentives presented by two possible paths of antidumping litigation. For some values of compliance costs, a domestic firm would rather face a cooperating foreign firm while for others it would rather compel the foreign firm to face the “facts available” dumping margin. It is not always in the domestic firm's interests to allege extremely high dumping margins by its foreign competitors, as long as the foreign firm has the option of cooperating with the domestic investigation. Certainly, the presence of a path of possible cooperation limits a domestic firm's ability to completely manipulate the antidumping process through allegations of very high foreign costs. The most important results are obtained when the decisions of the domestic authority are modeled. I have identified three distinct patterns of tariffs, compliance costs, and degree of foreign competition. In Model 1, if the domestic authority cannot or does not want to vary compliance costs, perhaps because of legislative or judicial constraints, there will be not be cooperation from all foreign firms, but with higher (lower) duties for noncooperating (cooperating) firms. If instead the authority has the freedom to set compliance costs, the outcomes depend critically on the degree to which consumer interests enter into its objective function. If the authority is indifferent to consumer losses (as in Model 2), compliance costs will be set so high that there will never be cooperation and domestic firms' allegations of dumping margins will lead to prohibitive tariffs. If the authority does care about consumer effects (as in Model 3), then nonprohibitive tariffs will be observed but compliance costs will vary greatly, with extremely low costs when foreign firms cooperate and higher compliance costs when firms do not cooperate. In principle, the data should reveal which prediction best fits actual practice. In the United States, for example, facts available information is used often but not exclusively. This would suggest that either the Model 1 (nonstrategic behavior) or Model 3 (consumer-sensitive) scenario. In principle, one should be able to distinguish between Models 1 and 3 by considering actual compliance costs. If the costs vary nontrivially across cases, there is support for Model 3; if costs remain unchanged, the DOC may simply be precluded by judicial review from acting strategically. Unfortunately, it is difficult to collect useful data on compliance costs. Nonetheless, this may be a useful exercise for later research. Model 3 as a possibility may surprise observers familiar with complaints about alleged DOC bias in favor of domestic petitioners in antidumping cases. The patterns predicted in the model are; nonetheless, not consistent with a world in which the DOC arbitrarily sets compliance costs to benefit domestic firms so that some of the DOC's critics' accusations may be unfounded. Certainly, the model abstracts from many complications. Modifications would include making fully endogenous the probability of antidumping success and the level of tariff imposed in the antidumping petition so the entire government's problem is solved. However, as argued above, varying these “parameters” may alter the particular profit levels facing the domestic and foreign firms but they would not change the basic problem that domestic firms make dumping allegations in a world where the foreign firm might respond by cooperating. One might also design an asymmetric information framework wherein the domestic authority provides an incentive compatible mechanism to induce truth telling by the foreign firm. Of course, such a mechanism should be credible so that one would always see cooperation. Nonetheless, this research takes a first step towards building “facts available” incentives into a model of antidumping procedures.