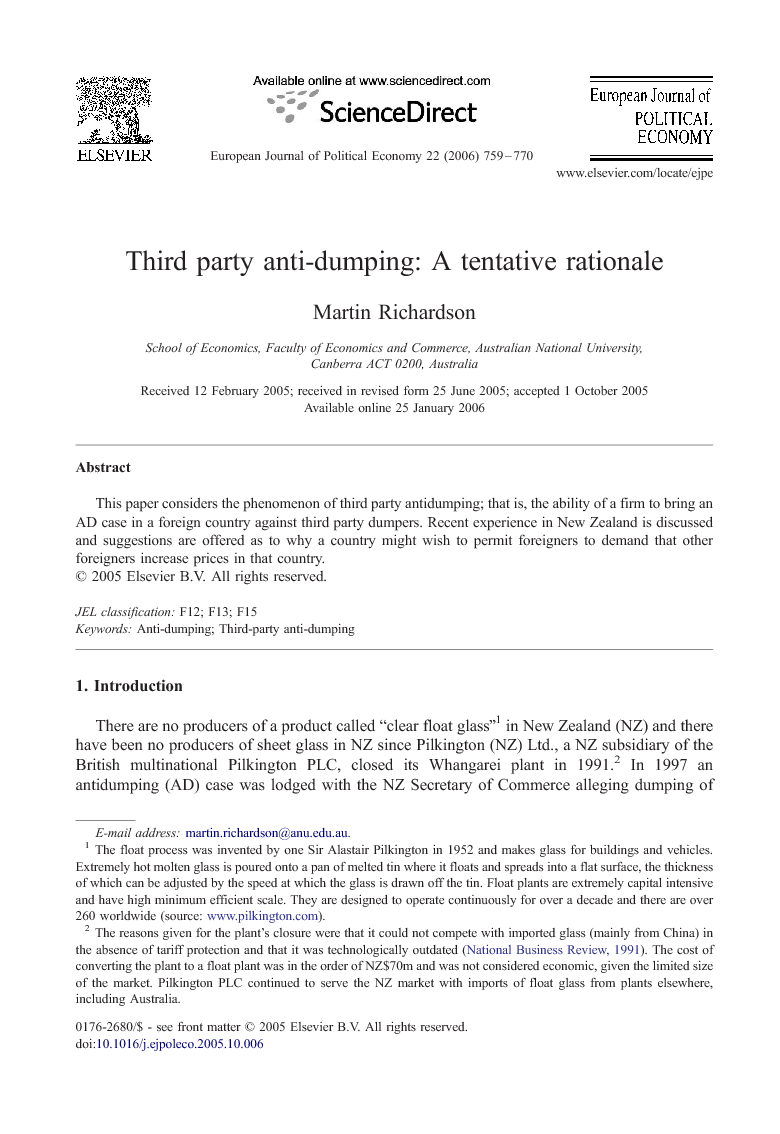 This paper considers the phenomenon of third party antidumping; that is, the ability of a firm to bring an AD case in a foreign country against third party dumpers. Recent experience in New Zealand is discussed and suggestions are offered as to why a country might wish to permit foreigners to demand that other foreigners increase prices in that country.

There are no producers of a product called “clear float glass”1 in New Zealand (NZ) and there have been no producers of sheet glass in NZ since Pilkington (NZ) Ltd., a NZ subsidiary of the British multinational Pilkington PLC, closed its Whangarei plant in 1991.2 In 1997 an antidumping (AD) case was lodged with the NZ Secretary of Commerce alleging dumping of clear float glass in NZ by firms from China, Indonesia and Thailand. The application was lodged by Australian authorities on behalf of Pilkington Australia Ltd. (PAL), the Australian subsidiary of Pilkington PLC, claiming material injury resulted to PAL in the NZ market. This is an example of third-party antidumping (TPAD) and raises the interesting question of why a country would permit an AD action to be brought in its territory on behalf of foreign firms. The basic economics of dumping suggests that it is almost invariably in the national interest of the importing country and the rationale for AD is that policy-makers weight the interests of domestic producers more heavily than those of domestic consumers.3 Hence TPAD is a bit of a puzzle: with no domestic industry interests at all, why inflict damage on domestic consumers? One obvious answer might be ‘reciprocity’: yes, NZ loses from Australian TPAD actions but it gains from TPAD actions brought in Australia on behalf of NZ firms. This is possible but, in this particular instance, NZ has never brought a TPAD case in Australia while four have been brought by Australia in NZ in the 1990s. This paper suggests another explanation for allowing TPAD. In a setting where firms can establish international subsidiaries, TPAD can enhance the efficient international location of production. One could then justify it on standard economic welfare grounds both from the perspective of the joint welfare of the importing country and the complainant and even, as we show, from the welfare perspective of the importing country alone, albeit in some very special circumstances. The purpose of this paper, however, is not to suggest that TPAD is wise policy. Indeed, the circumstances we describe below in which the importing country alone gains from TPAD are very particular. Furthermore, the case for TPAD based on the joint welfare of the importing country and the complainant is a second-best case: the circumstances in which joint welfare is raised by TPAD are circumstances in which the abolition of AD would be even better still. The remainder of the paper is organised as follows. In the next section we discuss in a little more detail the experience of NZ with TPAD and the legal context in which it operates. Section 3 outlines our argument and sets up a model to demonstrate our arguments. Section 4 then considers a practical caveat in the Australia–NZ case and a final section summarises and concludes.

After a review of TPAD legislation and some Australia–New Zealand cases, this paper has presented a stylised model to illustrate the possibility that allowing TPAD could be welfare-improving from the joint perspective of two countries and even from the perspective of the importing country alone. Some numerical simulations were run to illustrate this case. The central questions here, of course, are just how likely is this case and are there better policies than TPAD? On the former, the case in which the mutual welfare of A and B could be enhanced by TPAD does not seem too obscure – if A sets up in B primarily to establish a domestic presence to exploit AD rules (and there is certainly evidence that AD laws can affect firms' locational decisions – see Belderbos et al., 2004 and Blonigen, 2002 and references therein, although this is evidence on AD-duty jumping, not exploitation) then TPAD, by undoing that, can be a useful policy. This reasoning makes it clear, however, that this argument for TPAD is very much a second-best argument and would be dominated by simply abolishing AD altogether (for all the reasons economists have advanced for years.) In such a case, A's incentive to set up inefficiently in B in the first place would be removed. Furthermore, any possible benefits of TPAD in this setting must be weighed against the harmful aspects of TPAD (those of AD policy generally) when used in contexts where international relocation is not an issue. How likely is it that TPAD can raise welfare in B? We have made no secret of the fact that the scenario we set up here is very special. For TPAD to improve welfare in the importing country it must be that it leads to a fall in prices. This is not the usual consequence of AD actions and only occurs here because of the special parameter assumptions we have made which ensure that any production facility in B would operate as a monopolist. This is possible, of course, if there are substantial transport costs as in our simulations (so the local producer has a big cost advantage) and substantial marketing costs associated with exporting (so foreign competitors stay out, in anticipation of variable profits, in competition with the low-cost local producer, too small to cover these costs). Three final conclusions follow. First, from a practical perspective there are institutional barriers to TPAD that make it effectively unworkable (namely, the requirement that GATT members get CTG approval) and so unlikely to be of serious concern. Second, from a theoretical perspective, our analysis does suggest that, undesirable though TPAD might generally be for an importing country, it is likely to be more attractive in a free trade area where one might more sensibly argue that policy is set from the welfare perspective of countries jointly. Third, it is worthwhile noting that the conduct of TPAD as we have described it here can be isomorphic to the operation of AD more generally as a region-wide policy, such as in the European Union.16 That is, the conduct of trade policy within the EU can resemble that of the analysis here — if an AD action is brought to protect a French firm, say, from Chinese competition in the EU where most of the EU market is outside France then this is essentially TPAD as discussed here. In this respect our model is of more general application than might at first appear.