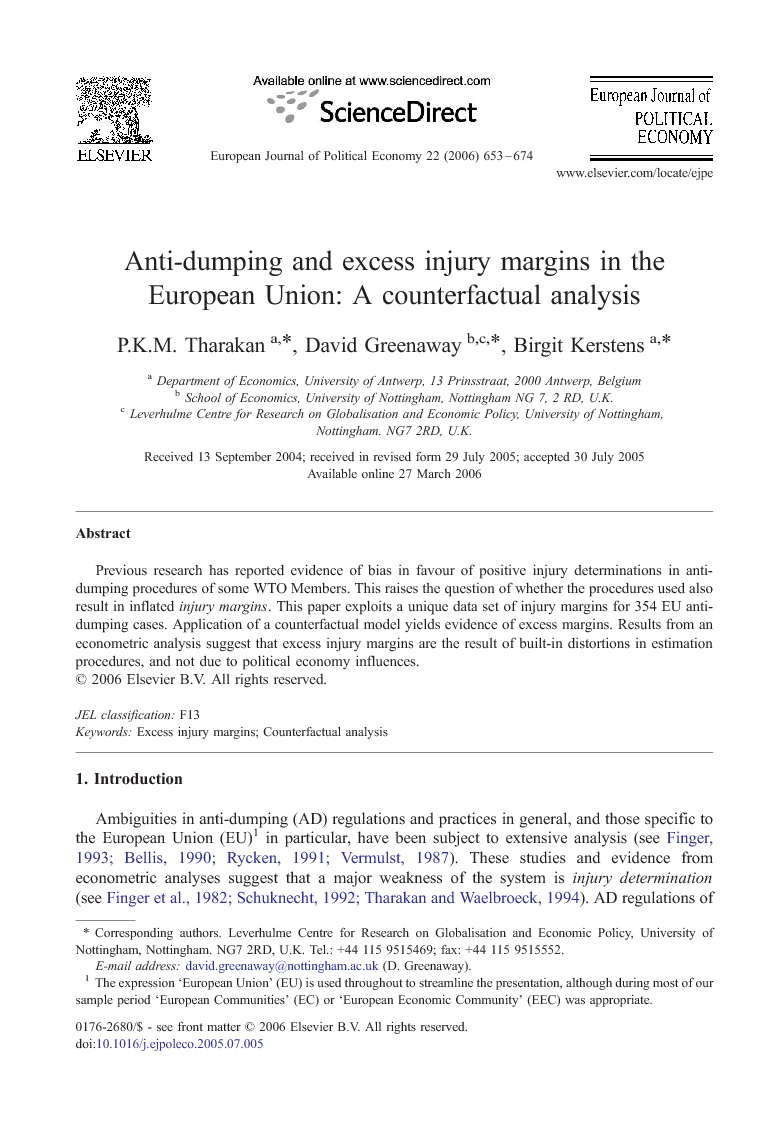 Previous research has reported evidence of bias in favour of positive injury determinations in anti-dumping procedures of some WTO Members. This raises the question of whether the procedures used also result in inflated injury margins. This paper exploits a unique data set of injury margins for 354 EU anti-dumping cases. Application of a counterfactual model yields evidence of excess margins. Results from an econometric analysis suggest that excess injury margins are the result of built-in distortions in estimation procedures, and not due to political economy influences.

Ambiguities in anti-dumping (AD) regulations and practices in general, and those specific to the European Union (EU)1 in particular, have been subject to extensive analysis (see Finger, 1993, Bellis, 1990, Rycken, 1991 and Vermulst, 1987). These studies and evidence from econometric analyses suggest that a major weakness of the system is injury determination (see Finger et al., 1982, Schuknecht, 1992 and Tharakan and Waelbroeck, 1994). AD regulations of World Trade Organization (WTO) Members stipulate that duties can be imposed only in cases where dumping has caused, or threatens to cause, material injury to the like-product (domestic) industry. Article 9.1. of the WTO Anti-Dumping Agreement states, “it is desirable…that the duty be less than the margin if such lesser duty would be adequate to remove the injury to the domestic industry”. AD rules of some Members 2 also state that any duty has to be limited to the amount required to eliminate that injury where this is less than the margin of dumping. 3 Furthermore, very low dumping margins should not lead to AD duties. 4 However, the combined effect of these well-intentioned rules is to create a bias in favour of positive injury findings, and inflated injury margins. Econometric analyses based on the political economy of contingent protection have shown that positive injury findings in the EU (and US) are vulnerable to pressure group influences (see Schuknecht, 1992, Tharakan and Waelbroeck, 1994 and Messerlin and Reed, 1995). But the overestimation of the margin of injury has not been analysed so far for large samples. This is an important issue since the decision to impose duties, and their economic effects, clearly depends on injury margins found, which is one of the reasons why injury has attracted interest in the Doha Round. Our focus is the extent to which excess margins are imposed in the EU. To our knowledge, this is the first analysis of this using such a large sample of cases, and over a period when the European Commission was most actively involved in AD actions (1980–1995). We begin by outlining the methods used by the EU in determining the margin of injury. We then present and evaluate a counterfactual method for injury margin determination that has been used in cases argued before the US International Trade Commission (ITC).5 We deploy this model to calculate alternative injury margins for all AD cases decided by the EU during 1980–1985. Having calculated margins, we briefly discuss whether the shortcomings of current estimation approaches, and political economy variables put forward by economists can explain the differences between the EU estimated injury margins and those estimated by our model. Our policy-oriented conclusions are set out in the final section.

Previous work on anti-dumping decisions has shown that injury determination is one of the weakest points of the system in the major trading countries including the EU. Injury determination is however only one part of the process, the margin of injury being the other. From an economic standpoint, the latter is in fact of most interest. Yet it has attracted little serious attention from economists, largely due to the difficulty of obtaining usable data. In this paper we have addressed the injury margin issue. Specifically we have analysed the divergence between injury margins as estimated by the EU and a counterfactual estimate of injury for the same cases. As assessment of the EU's estimation process shows that it has a built-in bias that could lead to overestimation of injury margins in certain types of cases. An alternative, counterfactual model is presented, evaluated and used to generate alternative estimates of injury margins for all AD cases decided by the EU during the period when it was most active in initiating AD cases. A comparison of these with EU estimates suggests that in an overwhelming majority of cases, the investigating authorities have overestimated injury margin. In more than 40% of cases, the real injury caused was so negligible (2% or less) that it may not have led to any anti-dumping duties. The built-ins or ‘structural’ distortions in the EU's estimation procedure lead systematically to inflated injury estimates in cases involving high technology industries, and exporters from non-market economies. But, according to our econometric results, the investigating authorities, unlike in the determination of the occurrence of injury, do not seem to have succumbed to political economy pressures systematically in injury margin determination. In other words, as far as the determination of the injury margin is concerned, the main problem is in the rules and the practices built around them rather than exploitation of those rules and practices by pressure groups. The main message of this paper is that the approach to injury determination stipulated in the EU's basic regulation and the practices that have been developed around it lead to overestimation of injury margins and consequently to what are probably significant welfare losses. But it would be unfair to blame the EU alone for such a situation. To the best of our knowledge, with one exception (the US), no Members of the WTO conduct counterfactual estimation of injury margins. Much is made of the beneficent effect of the lesser duty rule practiced by some. Since in the majority of AD decisions, the margin of injury tends to be less than the margin of dumping, the lower the injury margin, the lower will be the AD duty imposed, if the Lesser duty rule is in force. To the extent that counterfactual analysis provides a more objective estimate of injury margin, it should be a fair and economically appropriate procedure for this purpose. The problems with the WTO Anti-Dumping Agreement are not limited to the built-in distortion of injury margin estimation alone. The very definition of dumping contained in Article 2.1 of the Agreement rests on shaky grounds. Ideally, the approach to take is to amend the definition of dumping to limit it to predatory price dumping alone. But if political economy pressures will not permit such a move, it is important to rectify at least the major defects of the system. So on the basis of the above analysis we suggest that like-minded members of WTO propose to stipulate in the Agreement that AD injury margin determination should be carried out by using a scientifically defensible counterfactual model which should replace the currently used, and unreliable methods of price undercutting and price underselling. We further propose that Article 9.1. of the WTO Agreement on Anti-Dumping be amended to make the Lesser Duty rule mandatory and to stipulate that injury margins obtained by the counterfactual estimates will be the ones compared with the dumping margins.