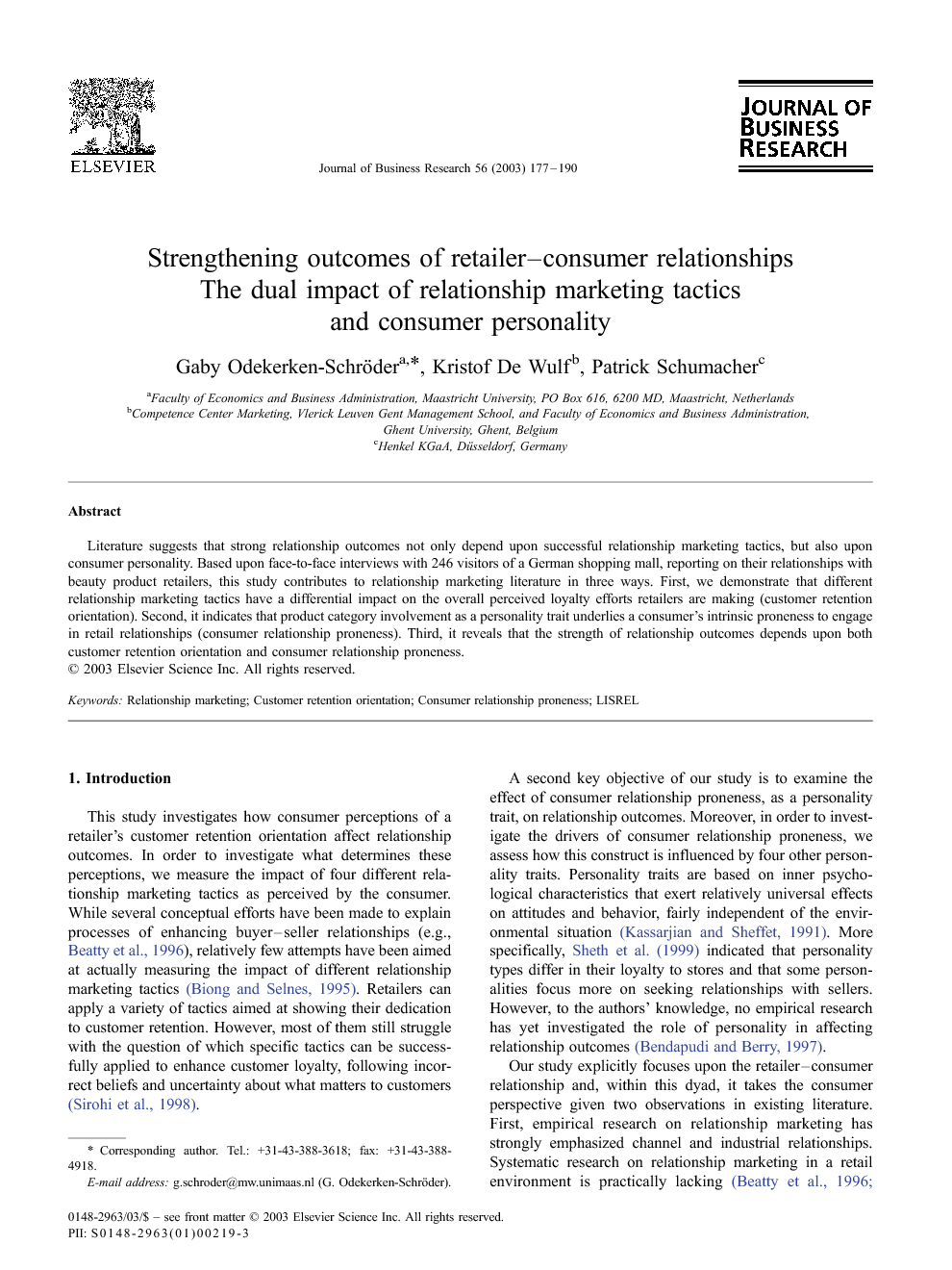 This study investigates how consumer perceptions of a retailer's customer retention orientation affect relationship outcomes. In order to investigate what determines these perceptions, we measure the impact of four different relationship marketing tactics as perceived by the consumer. While several conceptual efforts have been made to explain processes of enhancing buyer–seller relationships (e.g., Beatty et al., 1996), relatively few attempts have been aimed at actually measuring the impact of different relationship marketing tactics (Biong and Selnes, 1995). Retailers can apply a variety of tactics aimed at showing their dedication to customer retention. However, most of them still struggle with the question of which specific tactics can be successfully applied to enhance customer loyalty, following incorrect beliefs and uncertainty about what matters to customers (Sirohi et al., 1998). A second key objective of our study is to examine the effect of consumer relationship proneness, as a personality trait, on relationship outcomes. Moreover, in order to investigate the drivers of consumer relationship proneness, we assess how this construct is influenced by four other personality traits. Personality traits are based on inner psychological characteristics that exert relatively universal effects on attitudes and behavior, fairly independent of the environmental situation (Kassarjian and Sheffet, 1991). More specifically, Sheth et al. (1999) indicated that personality types differ in their loyalty to stores and that some personalities focus more on seeking relationships with sellers. However, to the authors' knowledge, no empirical research has yet investigated the role of personality in affecting relationship outcomes (Bendapudi and Berry, 1997). Our study explicitly focuses upon the retailer–consumer relationship and, within this dyad, it takes the consumer perspective given two observations in existing literature. First, empirical research on relationship marketing has strongly emphasized channel and industrial relationships. Systematic research on relationship marketing in a retail environment is practically lacking Beatty et al., 1996, Fournier, 1998 and Singh and Sirdeshmukh, 2000. Nevertheless, the importance of relationship marketing research in a retail setting is generally acknowledged. Taher et al. (1996), for instance, stressed that traditional store patronage is weakening due to new technologies, the appearance of internet stores, and consumers' time impoverishment. Second, relationship marketing has mainly been studied from a seller's perspective to the neglect of the buyer's perspective (Sheth and Parvatiyar, 1995). Nevertheless, several academics recognize the importance of taking a buyer perspective in investigating relationships Gruen, 1995 and Naidu et al., 1999. The assumption that a relationship can be formed with any buyer often leads sellers to waste valuable resources, simply because the buyer does not want a relationship.

Some limitations may be related to the way we collected our data and interpreted our results, which could inspire researchers to define their future research agendas. A first limitation may be the omission of important variables. For example, more tangible elements in the retail mix such as pricing and promotion, product quality and assortment, and service quality could be added as additional antecedents of the customer retention orientation of the retailer. Another potential shortcoming in the study is common method bias. As we used one single questionnaire to measure all constructs included, the strength of the relationships between these constructs may be somewhat inflated. A third potential limitation is related to the measurement of buying behavior. The true meaning of buying behavior may only be partially captured as its measure was self-declared by respondents. No database information could be used as input for measuring actual purchasing behavior. This study could be improved with access to more substantial data on customer purchase histories that are not subject to potential recall loss. It would then be possible to look at longer strings of purchases and to perhaps incorporate contextual information. Finally, it must be recognized that our sample of German consumers reporting on retailers selling beauty products cannot necessarily be generalized to other retail contexts. This limits the findings as relevant only to these types of consumers and retailers. Future studies need to assess the generalizability of our findings to other consumer groups in other contexts. For example, how similar is the described model in a food or apparel shopping context?