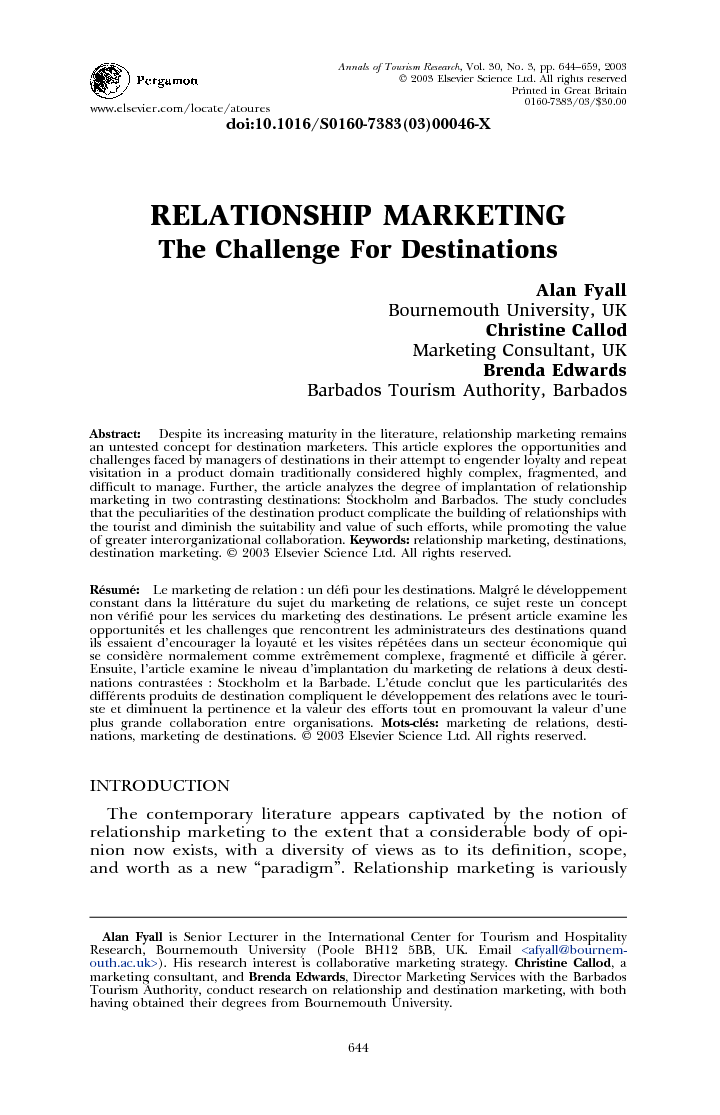 Despite its increasing maturity in the literature, relationship marketing remains an untested concept for destination marketers. This article explores the opportunities and challenges faced by managers of destinations in their attempt to engender loyalty and repeat visitation in a product domain traditionally considered highly complex, fragmented, and difficult to manage. Further, the article analyzes the degree of implantation of relationship marketing in two contrasting destinations: Stockholm and Barbados. The study concludes that the peculiarities of the destination product complicate the building of relationships with the tourist and diminish the suitability and value of such efforts, while promoting the value of greater interorganizational collaboration.

The contemporary literature appears captivated by the notion of relationship marketing to the extent that a considerable body of opinion now exists, with a diversity of views as to its definition, scope, and worth as a new “paradigm”. Relationship marketing is variously considered to be a tactical “currency” promotional activity, often linked to database technology (Bickert 1992), a strategic tool whereby suppliers seek to “tie-in” customers and achieve customer retention (Gummesson 1999), and as a fundamental business philosophy (Peppers and Rogers 1995). In this paper, the focus is on individual, or one-to-one, relationships with customers, which frequently integrate database knowledge with long-term customer retention and growth strategies. With such divergent approaches to its core proposition, it is not surprising that a common definition has proved elusive. But that proposed by Shani and Chalasani (1992)—“an integrated effort to identify, maintain, and build up a network with individual consumers and to continuously strengthen the network for the mutual benefit of both sides, through interactive, individualized, and value added contacts over a long period of time”—encompasses many definitional facets from other authors. For example, it incorporates the long-term orientation proposed by Doyle and Thomas (1992), the shift in emphasis from manipulation to genuine customer involvement argued by McKenna (1991), and the need to work towards common goals put forward by Buttle (1996). It also emphasizes the need to attract, maintain, and enhance customer relationships (Berry 1983, Grönroos 1983 and Gummesson 1987), as well as the need for all marketing activities to be directed towards establishing, developing, and maintaining successful relationships, as suggested by Morgan and Hunt (1994). With its long history of relational exchange, tourism has witnessed the introduction of many relationship marketing practices. Airline frequent flyer programs (Gilbert 1996, Gilbert and Karabeyekian 1995 and Liu et al 2000), hotel frequent guest programs (Danaher and Mattsson 1994 and Palmer et al 2000), and car rental company customer preference schemes (Chadee and Mattsson 1996) have all contributed to tourism being at the forefront of industries adopting relationship marketing (Palmer and Mayer 1996). However, doubt has been cast over the extent to which this practice can permeate the domain of this marketing theme, the destination serving as the crux of tourism, and traditionally considered to be highly complex, fragmented, and difficult to manage (Gunn 1993). With increasing global competition owing to newly-emerging destinations and tourists becoming more exacting in their choice and desire for a variety of options, relationship marketing arguably offers considerable potential to achieve competitive advantage.