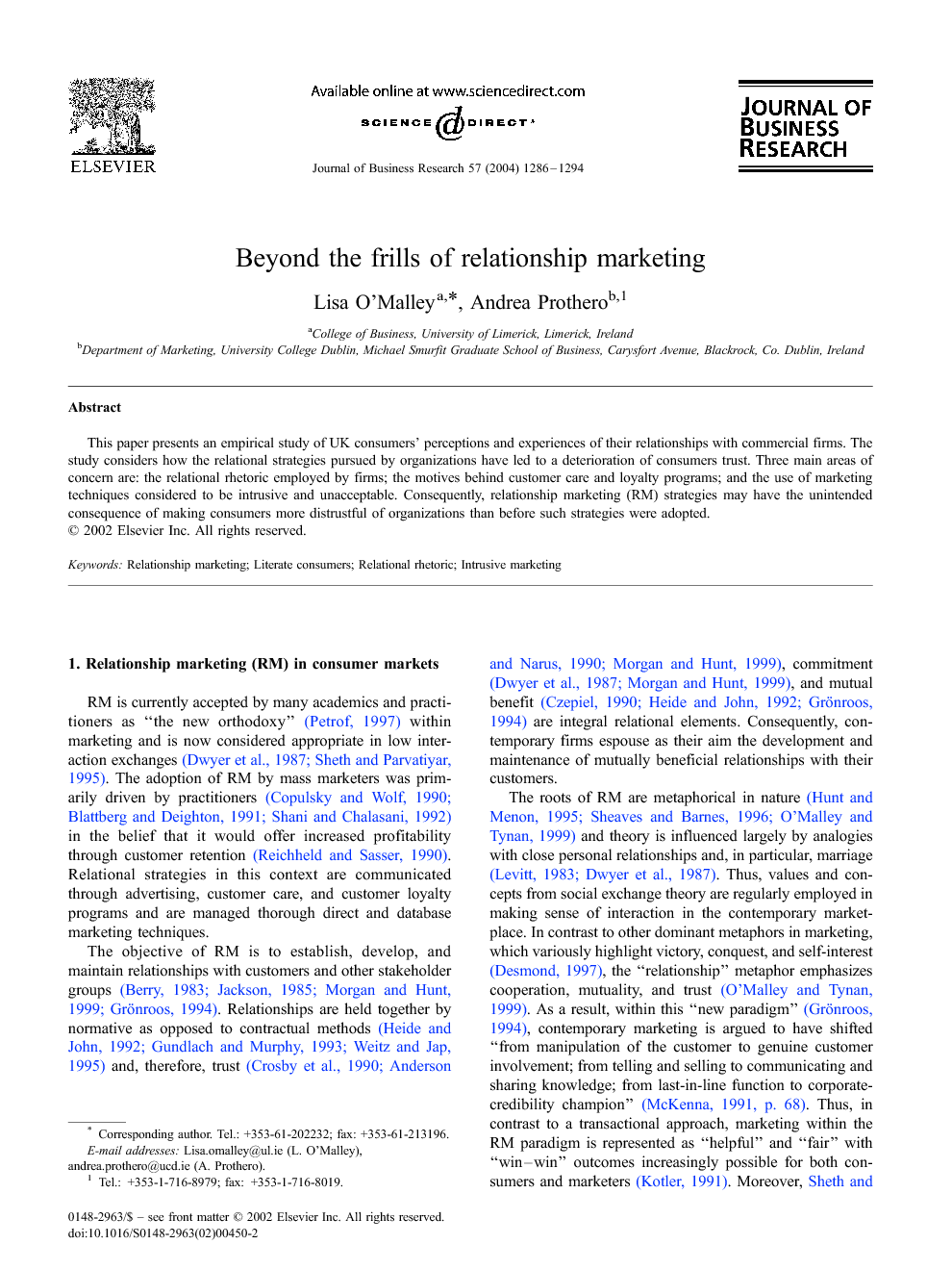 This paper presents an empirical study of UK consumers' perceptions and experiences of their relationships with commercial firms. The study considers how the relational strategies pursued by organizations have led to a deterioration of consumers trust. Three main areas of concern are: the relational rhetoric employed by firms; the motives behind customer care and loyalty programs; and the use of marketing techniques considered to be intrusive and unacceptable. Consequently, relationship marketing (RM) strategies may have the unintended consequence of making consumers more distrustful of organizations than before such strategies were adopted

RM is currently accepted by many academics and practitioners as “the new orthodoxy” (Petrof, 1997) within marketing and is now considered appropriate in low interaction exchanges Dwyer et al., 1987 and Sheth and Parvatiyar, 1995. The adoption of RM by mass marketers was primarily driven by practitioners Copulsky and Wolf, 1990, Blattberg and Deighton, 1991 and Shani and Chalasani, 1992 in the belief that it would offer increased profitability through customer retention (Reichheld and Sasser, 1990). Relational strategies in this context are communicated through advertising, customer care, and customer loyalty programs and are managed thorough direct and database marketing techniques. The objective of RM is to establish, develop, and maintain relationships with customers and other stakeholder groups Berry, 1983, Jackson, 1985, Morgan and Hunt, 1999 and Grönroos, 1994. Relationships are held together by normative as opposed to contractual methods Heide and John, 1992, Gundlach and Murphy, 1993 and Weitz and Jap, 1995 and, therefore, trust Crosby et al., 1990, Anderson and Narus, 1990 and Morgan and Hunt, 1999, commitment Dwyer et al., 1987 and Morgan and Hunt, 1999, and mutual benefit Czepiel, 1990, Heide and John, 1992 and Grönroos, 1994 are integral relational elements. Consequently, contemporary firms espouse as their aim the development and maintenance of mutually beneficial relationships with their customers. The roots of RM are metaphorical in nature Hunt and Menon, 1995, Sheaves and Barnes, 1996 and O'Malley and Tynan, 1999 and theory is influenced largely by analogies with close personal relationships and, in particular, marriage Levitt, 1983 and Dwyer et al., 1987. Thus, values and concepts from social exchange theory are regularly employed in making sense of interaction in the contemporary marketplace. In contrast to other dominant metaphors in marketing, which variously highlight victory, conquest, and self-interest (Desmond, 1997), the “relationship” metaphor emphasizes cooperation, mutuality, and trust (O'Malley and Tynan, 1999). As a result, within this “new paradigm” (Grönroos, 1994), contemporary marketing is argued to have shifted “from manipulation of the customer to genuine customer involvement; from telling and selling to communicating and sharing knowledge; from last-in-line function to corporate-credibility champion” (McKenna, 1991, p. 68). Thus, in contrast to a transactional approach, marketing within the RM paradigm is represented as “helpful” and “fair” with “win–win” outcomes increasingly possible for both consumers and marketers (Kotler, 1991). Moreover, Sheth and Parvatiyar (1995, p. 265) argue that RM represents “enlightened self-interest” and enhances the image of marketing in society. Furthermore, it is posited that RM results in more focused marketing strategies, increased customer loyalty, decreased price sensitivity, and the creation of opportunities for up-selling and cross-selling Dwyer et al., 1987, Reichheld and Sasser, 1990, Grönroos, 1994 and Pine et al., 1995, all of which result in improvements to marketing's effectiveness and efficiency (Sheth and Parvatiyar, 1995). As a result, relationships have come to be regarded as an important source of competitive advantage. However, as Polonsky et al. (1999, p. 43) argue, because “firm–stakeholder relationships change over time… strategy may have unintended or undesired consequences.” In particular, because marketing occurs “in society, with society's permission and support, and purportedly, in part for society's benefit” (Camenisch, 1991, p. 246), the societal impact of RM is worthy of further investigation. The majority of studies focus on the organizational motivation for RM and, as such, the consumer side of the equation has attracted less consideration, representing a significant limitation within the RM discourse (see Sheaves and Barnes, 1996, Fitchett and McDonagh, 2000 and O'Malley and Tynan, 2000). Indeed, few empirical studies have been initiated, which critically consider the consumer's point of view, and those that do, suggest that contemporary approaches to operationalizing RM are inappropriate and may actually inhibit successful relationship development O'Malley et al., 1997 and Fournier et al., 1998. Furthermore, there are suggestions that in mass markets, the tools and techniques employed are more representative of stalking and rape than they are of courtship and love (Tynan, 1997). Indeed, critical theorists argue that RM does little more than provide a cosmetic moral face for marketing Alvesson, 1994 and Desmond, 1997 with statements of ‘trust,’ ‘commitment,’ and ‘mutuality’ dismissed “as either simulations without content, or alternatively sentiments driven by the instrumental desirability of the relationship” (Smith and Higgins, 2000, p. 87). This paper reports an attempt to seek views of consumers towards RM and to conceptualize their perceptions from a broader, societal perspective. In so doing, this work enhances our understanding of the problems inherent in the operationalization of RM in mass markets. Specifically, it is our contention that deliberate attempts on the part of firms to engender closer relationships with consumers have had unintended and largely undesirable effects. We argue that the RM discourse lacks meaning for contemporary consumers because they are inherently distrustful of organizational activities and organizational motivations.

The use of RM is designed to raise customer expectations and makes implicit promises to customers and other stakeholder groups. As a result, the creation of RM has sown the seeds of new problems, as well as new opportunities for marketing. Organizations that wish to engage in RM in a mass market context should consider how their strategies might result in unintended consequences. The use of various RM tools, as indicated in this paper, may not have the desired outcome of developing cooperation, mutuality, and trust between a firm and its consumers. Consequently, the views of Fournier et al., (1998, p. 49) seem particularly pertinent here: “Let's put our relational motives on the table: no fluff, no faked sincerity, no obtuse language, no promises we don't keep—just honesty about commercial intent.” Organizations must carefully manage their operations to avoid suggestions that they are cashing in on the latest issue or fad. They will need to work hard to overcome perceptions that RM exists only at the level of discourse (see Fitchett and McDonagh, 2000 and Sturdy et al., 2001). This has important implications for customer communications, in particular, and more fundamentally requires a whole rethinking of contemporary marketing systems. As such, this goes beyond the remit of any individual organization. Despite this, individual firms can strive to ensure that they consider the impact of their strategies on numerous stakeholder groups. In doing so, firms must be cognizant that RM is not a strategy that can be created; it is a position that must be lived. It must be evident in every part of the organization, every member of staff, every communication, and every single detail of the organization's business operations. Overall then, informants are concerned with the lengths to which firms will go to in order to attract and keep their custom. They view company actions in key areas with suspicion and do not believe that they engage in actions for the simple good of the consumer. As such, “the obligations on the part of companies seeking this pseudo-personal relationship are huge and consumers can feel betrayed when these obligations are violated” (Lannon, 1995, p. 163). This paper has provided much needed empirical data on consumers' opinions about their relationships with organizations. Our research suggests that RM has had the unintended consequence of increasing consumer distrust of organizations' activities and motives. Thus, despite “the rhetorical moral buttressing” inherent in relational strategies (Smith and Higgins, 2000, p. 87), our informants emerge as literate consumers of marketing communications and savvy exchange participants who appear to recognize relational strategies as shallow and potentially divisive in nature. Thus, suggestions that “win–win” outcomes are possible for all consumers and organizations are undermined, particularly within mass markets. Specifically, a tension emerges from the communication of altruistic concerns by many organizations, against the backdrop of the recognized need for profit maximization. In terms of avenues for further research, greater understanding of consumers' perceptions and experiences of RM is required because the RM literature, as it stands, continues to espouse the benefits of RM from an organizational perspective. In particular, research that investigates consumer experiences of relational strategies by different types of firm, and in different countries, would be insightful. Moreover, greater elucidation of the role of trust/distrust in contemporary exchange would address the relevance and potential utility of RM in a mass market context. Further insights into how consumers regard contemporary organizations, the values that they wish to see portrayed by commercial entities, and the relative emphasis of functional and symbolic attributes in different exchange contexts would all usefully inform future marketing strategy. This paper has explored contemporary RM discourse from the point of view of an important, but greatly underrepresented, constituent—the consumer. The findings presented here suggest that, although popular, RM may have failed in promoting a more positive image for marketing. While it is demonstrably simple to appropriate relational language to convey cooperation, mutuality, and trust between a firm and its consumers, delivering on such promises is difficult, particularly in an environment where shareholder demands and profit maximization drive business.