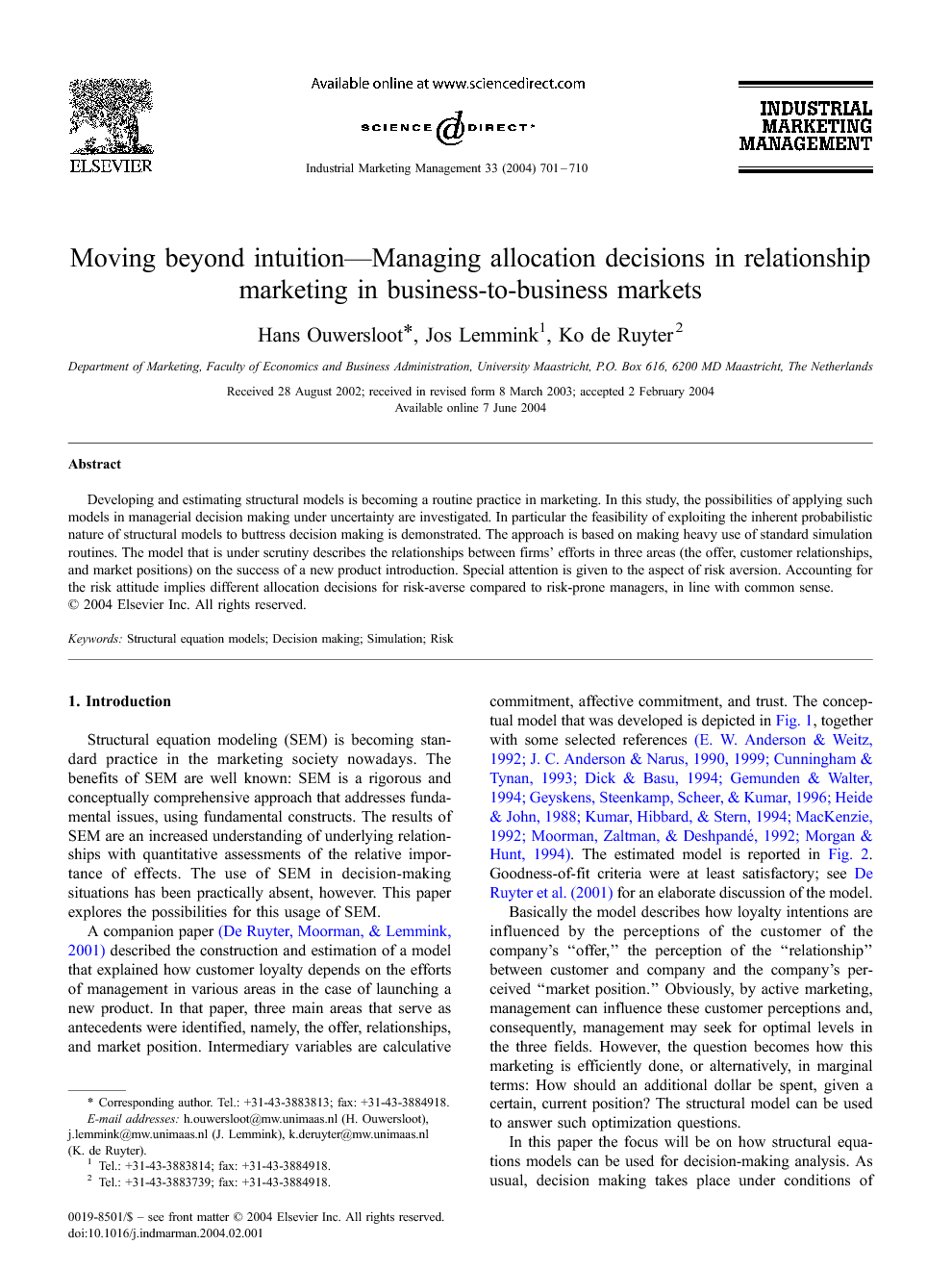 Developing and estimating structural models is becoming a routine practice in marketing. In this study, the possibilities of applying such models in managerial decision making under uncertainty are investigated. In particular the feasibility of exploiting the inherent probabilistic nature of structural models to buttress decision making is demonstrated. The approach is based on making heavy use of standard simulation routines. The model that is under scrutiny describes the relationships between firms' efforts in three areas (the offer, customer relationships, and market positions) on the success of a new product introduction. Special attention is given to the aspect of risk aversion. Accounting for the risk attitude implies different allocation decisions for risk-averse compared to risk-prone managers, in line with common sense.

Structural equation modeling (SEM) is becoming standard practice in the marketing society nowadays. The benefits of SEM are well known: SEM is a rigorous and conceptually comprehensive approach that addresses fundamental issues, using fundamental constructs. The results of SEM are an increased understanding of underlying relationships with quantitative assessments of the relative importance of effects. The use of SEM in decision-making situations has been practically absent, however. This paper explores the possibilities for this usage of SEM. A companion paper (De Ruyter, Moorman, & Lemmink, 2001) described the construction and estimation of a model that explained how customer loyalty depends on the efforts of management in various areas in the case of launching a new product. In that paper, three main areas that serve as antecedents were identified, namely, the offer, relationships, and market position. Intermediary variables are calculative commitment, affective commitment, and trust. The conceptual model that was developed is depicted in Fig. 1, together with some selected references Anderson & Weitz, 1992, Anderson & Narus, 1990, Anderson & Narus, 1999, Cunningham & Tynan, 1993, Dick & Basu, 1994, Gemunden & Walter, 1994, Geyskens et al., 1996, Heide & John, 1988, Kumar et al., 1994, MacKenzie, 1992, Moorman et al., 1992 and Morgan & Hunt, 1994. The estimated model is reported in Fig. 2. Goodness-of-fit criteria were at least satisfactory; see De Ruyter et al. (2001) for an elaborate discussion of the model.Basically the model describes how loyalty intentions are influenced by the perceptions of the customer of the company's “offer,” the perception of the “relationship” between customer and company and the company's perceived “market position.” Obviously, by active marketing, management can influence these customer perceptions and, consequently, management may seek for optimal levels in the three fields. However, the question becomes how this marketing is efficiently done, or alternatively, in marginal terms: How should an additional dollar be spent, given a certain, current position? The structural model can be used to answer such optimization questions. In this paper the focus will be on how structural equations models can be used for decision-making analysis. As usual, decision making takes place under conditions of uncertainty. In modeling terms, uncertainty shows up as nondeterministic, that is, probabilistic construct values, parameters, and error terms. It will be argued that this model uncertainty mimics (part of) the uncertainty a real decision maker is confronted with. Thus, after describing the fundamentals of decision making with the help of structural equation models, the discussion will focus on how the uncertainty component comes in and how it affects the analysis. Next, the results of analysis are presented, followed by a discussion of the implications. Finally, the article concludes with some suggestions for future research.

For decision makers, direct input–output or cause-and-effect models like market response models (Lilien & Rangaswamy, 1998) are often a sufficient tool. The analytical understanding is left in the black box of the model. Structural equation models quite in contrast seek to get hold of that black box, thereby gaining in rigor and depth of understanding. These characteristics of SEM should help in getting the models accepted by the decision makers, and this paper shows that they can also provide support in the decision-making process. One aspect in particular needs to be emphasized. SEMs are well suited to make explicit the type of uncertainty that is incorporated. Therewith they make it possible to quantify the degree of uncertainty, simultaneously leaving the option open that uncertainties can be interrelated. The estimated covariance structure in the measurement model and the structural model give this opportunity. The model that was used in this paper to demonstrate the approach indicates the usefulness of SEM in decision making. The calculations above clearly exemplify the type of advice on investment decisions that can be derived from the analysis demonstrated in this paper. This could read as follows: The higher risk-averse managers are, the more they are advised to invest in the market positioning and relationships. In contrast, risk-prone managers probably will be better-off investing in product innovations. This conclusion is certainly valid for the short term, but might be valid on the longer term as well because of the shown loyalty of the customer base. The importance of relationship management is intermediate. The extremely risk prone manager only looks at the offer. The extreme risk-averse manager looks mainly at the market conditions. In between, the importance of relationships reaches a maximum. This means that moving along the continuum from risk prone to risk averse the manager first starts looking at his most direct environment, his relationships, but at some point recognizes that this is not enough, and that he should also look at the other actors in the market.