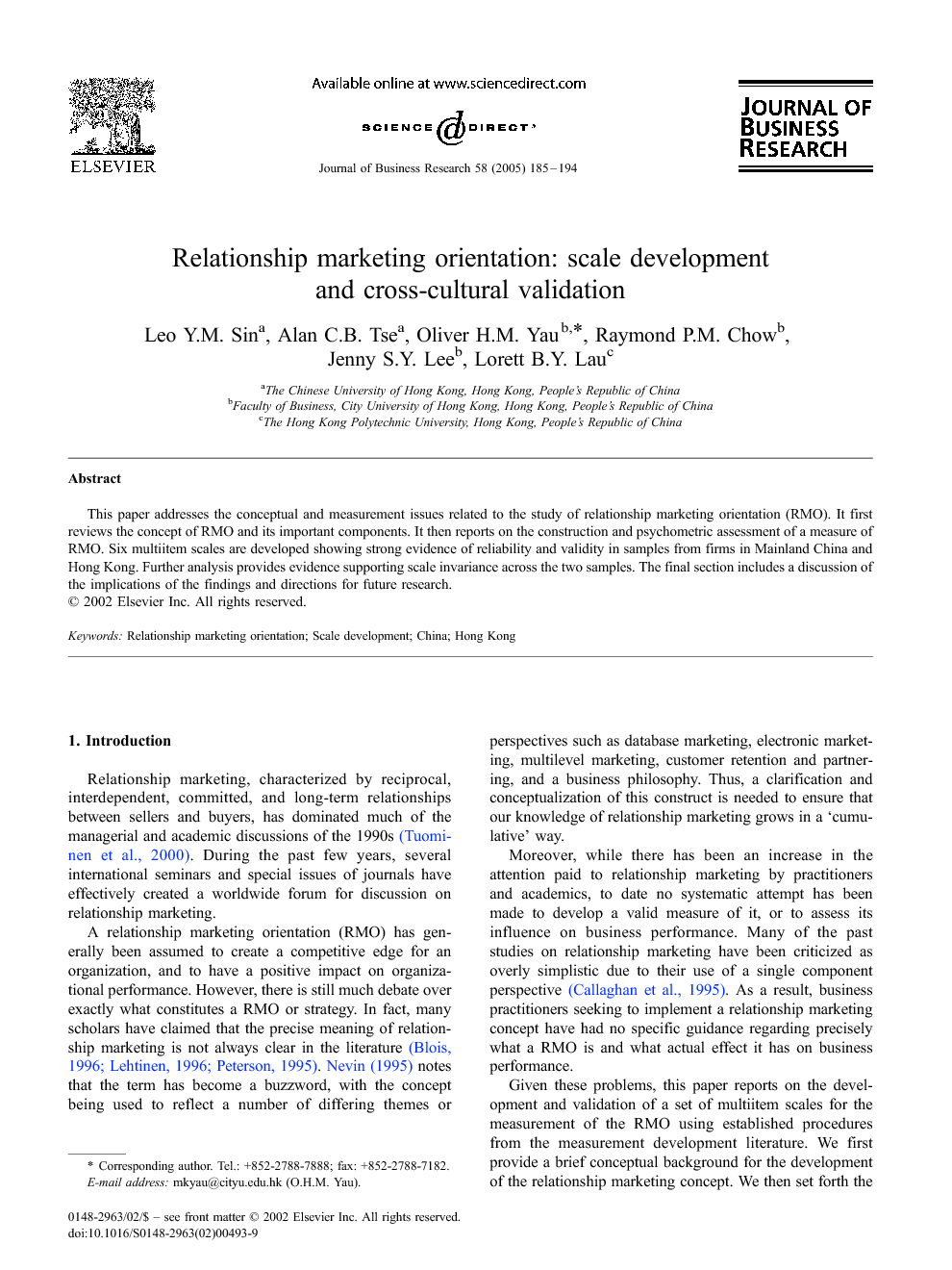 This paper addresses the conceptual and measurement issues related to the study of relationship marketing orientation (RMO). It first reviews the concept of RMO and its important components. It then reports on the construction and psychometric assessment of a measure of RMO. Six multiitem scales are developed showing strong evidence of reliability and validity in samples from firms in Mainland China and Hong Kong. Further analysis provides evidence supporting scale invariance across the two samples. The final section includes a discussion of the implications of the findings and directions for future research.

Relationship marketing, characterized by reciprocal, interdependent, committed, and long-term relationships between sellers and buyers, has dominated much of the managerial and academic discussions of the 1990s (Tuominen et al., 2000). During the past few years, several international seminars and special issues of journals have effectively created a worldwide forum for discussion on relationship marketing. A relationship marketing orientation (RMO) has generally been assumed to create a competitive edge for an organization, and to have a positive impact on organizational performance. However, there is still much debate over exactly what constitutes a RMO or strategy. In fact, many scholars have claimed that the precise meaning of relationship marketing is not always clear in the literature Blois, 1996, Lehtinen, 1996 and Peterson, 1995. Nevin (1995) notes that the term has become a buzzword, with the concept being used to reflect a number of differing themes or perspectives such as database marketing, electronic marketing, multilevel marketing, customer retention and partnering, and a business philosophy. Thus, a clarification and conceptualization of this construct is needed to ensure that our knowledge of relationship marketing grows in a ‘cumulative’ way. Moreover, while there has been an increase in the attention paid to relationship marketing by practitioners and academics, to date no systematic attempt has been made to develop a valid measure of it, or to assess its influence on business performance. Many of the past studies on relationship marketing have been criticized as overly simplistic due to their use of a single component perspective (Callaghan et al., 1995). As a result, business practitioners seeking to implement a relationship marketing concept have had no specific guidance regarding precisely what a RMO is and what actual effect it has on business performance. Given these problems, this paper reports on the development and validation of a set of multiitem scales for the measurement of the RMO using established procedures from the measurement development literature. We first provide a brief conceptual background for the development of the relationship marketing concept. We then set forth the hypothesized components of the RMO and follow this with a description of the procedures used to construct the subscales and assess their psychometric properties. We conclude with a discussion of the implications of the research findings and directions for future research.

Our study is the first attempt to build and test a conceptual framework of relationship marketing. The present findings are therefore indicative rather than conclusive. However, this study suggests, in addition to the preceding suggestions for future research design, some other future research directions on RMO. First, it would be useful to assess the generalizability of the RMO model developed in this study to other contexts, such as the relationships between manufacturers and distributors, retailers and consumers, as well as between manufacturers and suppliers. With more replicative and creative research, it is expected that a more comprehensive conceptual framework related to relationship marketing can be developed in the future. Second, although the results of this study provide support for the notion that RMO has a positive influence on business performance, it is important to note that business performance is a multidimensional construct that may be characterized in a number of ways, including effectiveness, efficiency, and adaptability (Walker and Ruekert, 1987). Therefore, it would be useful to explore the complexities of the relationship between RMO and alternative dimensions of business performance in future studies. Third, the determinants (i.e., antecedents) of RMO also require both theoretical and empirical investigation; after all, managers need to know how they can be instrumental in shaping the RMO of their firms. Fourth, previous studies have suggested that differences in the market environments of different countries may influence the types of strategies developed and adopted by companies, as well as the impact of these strategies on business performance Freeman and Schendel, 1974, Douglas and Craig, 1983, Schneeweis, 1983, Douglas and Rhee, 1989 and Manu, 1992. Future studies should examine the moderating effect of environmental factors such as market turbulence, competitive hostility and market growth, on the association between RMO and business performance. Finally, data for this study were collected by the key informant approach. Although senior managers as key informants are adequate for reliable and valid data (Tan and Litschert, 1994), the information generated by a firm is not the only source of information about its level of RMO. Clearly, it is important to contrast a firm's degree of RMO as assessed by internal information (e.g., managers' responses to questionnaires, as we have done in this study) with the firm's level of RMO as perceived by its customers, competitors, and distributors. This is another challenging area for future research in RMO.