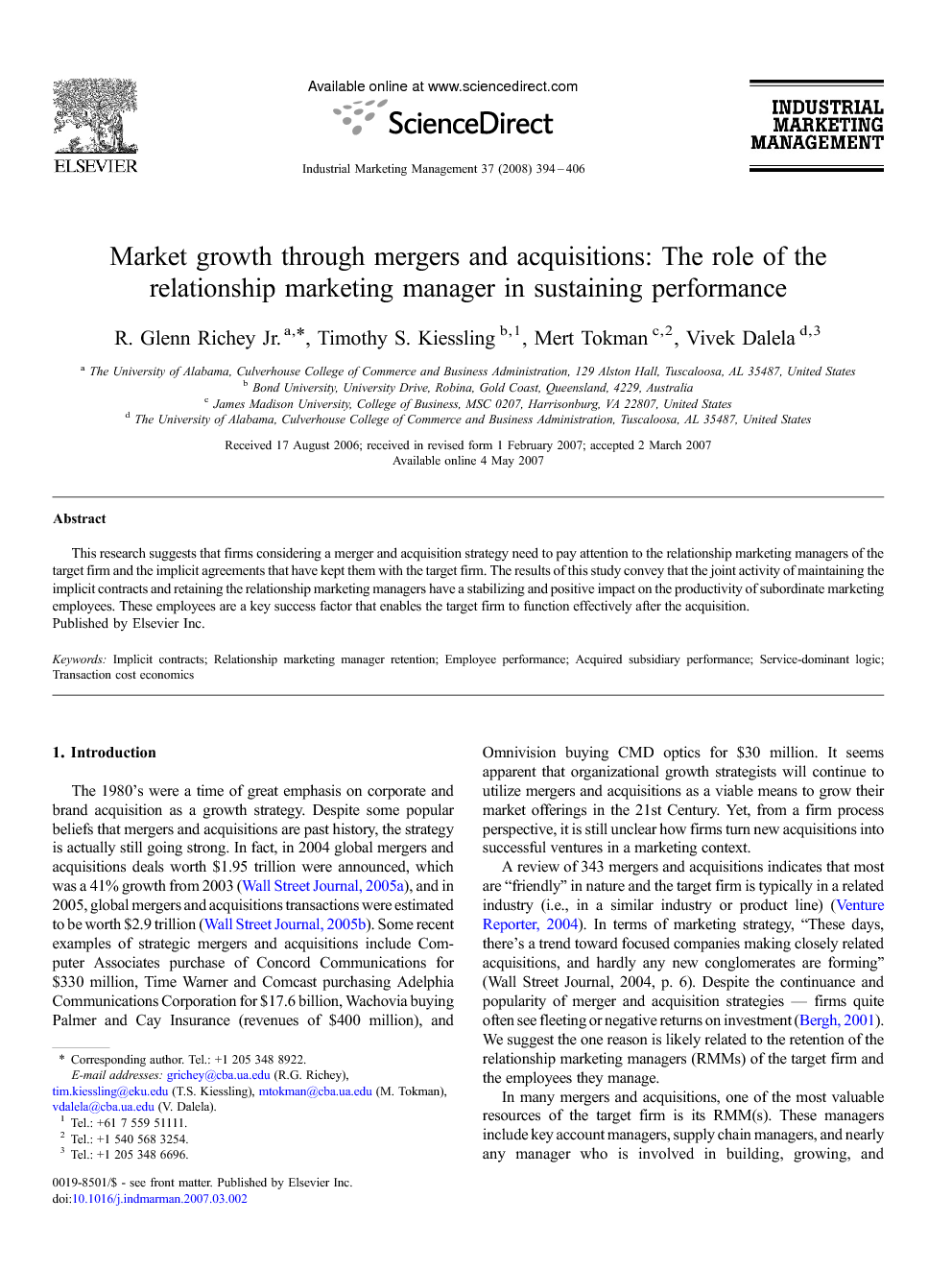 This research suggests that firms considering a merger and acquisition strategy need to pay attention to the relationship marketing managers of the target firm and the implicit agreements that have kept them with the target firm. The results of this study convey that the joint activity of maintaining the implicit contracts and retaining the relationship marketing managers have a stabilizing and positive impact on the productivity of subordinate marketing employees. These employees are a key success factor that enables the target firm to function effectively after the acquisition.

The 1980's were a time of great emphasis on corporate and brand acquisition as a growth strategy. Despite some popular beliefs that mergers and acquisitions are past history, the strategy is actually still going strong. In fact, in 2004 global mergers and acquisitions deals worth $1.95 trillion were announced, which was a 41% growth from 2003 (Wall Street Journal, 2005a), and in 2005, global mergers and acquisitions transactions were estimated to be worth $2.9 trillion (Wall Street Journal, 2005b). Some recent examples of strategic mergers and acquisitions include Computer Associates purchase of Concord Communications for $330 million, Time Warner and Comcast purchasing Adelphia Communications Corporation for $17.6 billion, Wachovia buying Palmer and Cay Insurance (revenues of $400 million), and Omnivision buying CMD optics for $30 million. It seems apparent that organizational growth strategists will continue to utilize mergers and acquisitions as a viable means to grow their market offerings in the 21st Century. Yet, from a firm process perspective, it is still unclear how firms turn new acquisitions into successful ventures in a marketing context. A review of 343 mergers and acquisitions indicates that most are “friendly” in nature and the target firm is typically in a related industry (i.e., in a similar industry or product line) (Venture Reporter, 2004). In terms of marketing strategy, “These days, there's a trend toward focused companies making closely related acquisitions, and hardly any new conglomerates are forming” (Wall Street Journal, 2004, p. 6). Despite the continuance and popularity of merger and acquisition strategies — firms quite often see fleeting or negative returns on investment (Bergh, 2001). We suggest the one reason is likely related to the retention of the relationship marketing managers (RMMs) of the target firm and the employees they manage. In many mergers and acquisitions, one of the most valuable resources of the target firm is its RMM(s). These managers include key account managers, supply chain managers, and nearly any manager who is involved in building, growing, and maintaining inter-organizational exchange relationships in a marketing environment (Seshadri & Mishra, 2004). Despite the importance of the RMMs in maintaining post-acquisition inter-organizational relationships, much of the existing research on mergers and acquisitions has specifically focused on top management teams rather than those fostering and cementing relationships (Hubbard and Purcell, 2001, Adobor, 2004, Bijlsma-Frankema, 2004, Walsh and Kosnik, 1993 and Cannella and Hambrick, 1993). The use of mergers and acquisitions as a market growth strategy suggests that the marketing human resources of the target firm are valuable assets due to the importance of long-term growth through consistency. Suitable efforts need to be made to retain these key managers after the acquisition. In terms of maintaining relationships with acquired RMMs, the organization's culture, strategy, and dynamics are largely dependant on the RMMs of the acquired organization (Cyert and March, 1963, Pfeffer, 1981 and Salancik and Pfeffer, 1977) and as such, key managers need to be retained for the continued good performance of a successful target firm (Finkelstein and Hambrick, 1996 and Koch and McGrath, 1996). In this study we suggest that key success factors such as implicit contract maintenance, RMM retention, and subordinate marketing employee performance impact a firm's post-acquisition performance through an employee mediated relationship.

This research details that firms considering a merger and acquisition strategy need to pay attention to the RMMs of the target firm and the implicit agreements that have kept them with the target firm. These individuals link partner firms and their customers to the enterprise under consideration. Maintaining the gentlemen's agreements or implicit portions of their relationship contracts will give the acquisition a better chance of survival and prosperity. The joint activity of maintaining the implicit contracts and retaining the RMMs can have a stabilizing and positive impact on the productivity of subordinate employees. These employees are the key success factor that enables the target firm to function effectively after the acquisition. Loss of the RMM and the break down of the implicit contract can add up to a situation that is likely occurring across many mergers and acquisitions — the lack of attention to the employees is negatively impacting productivity.