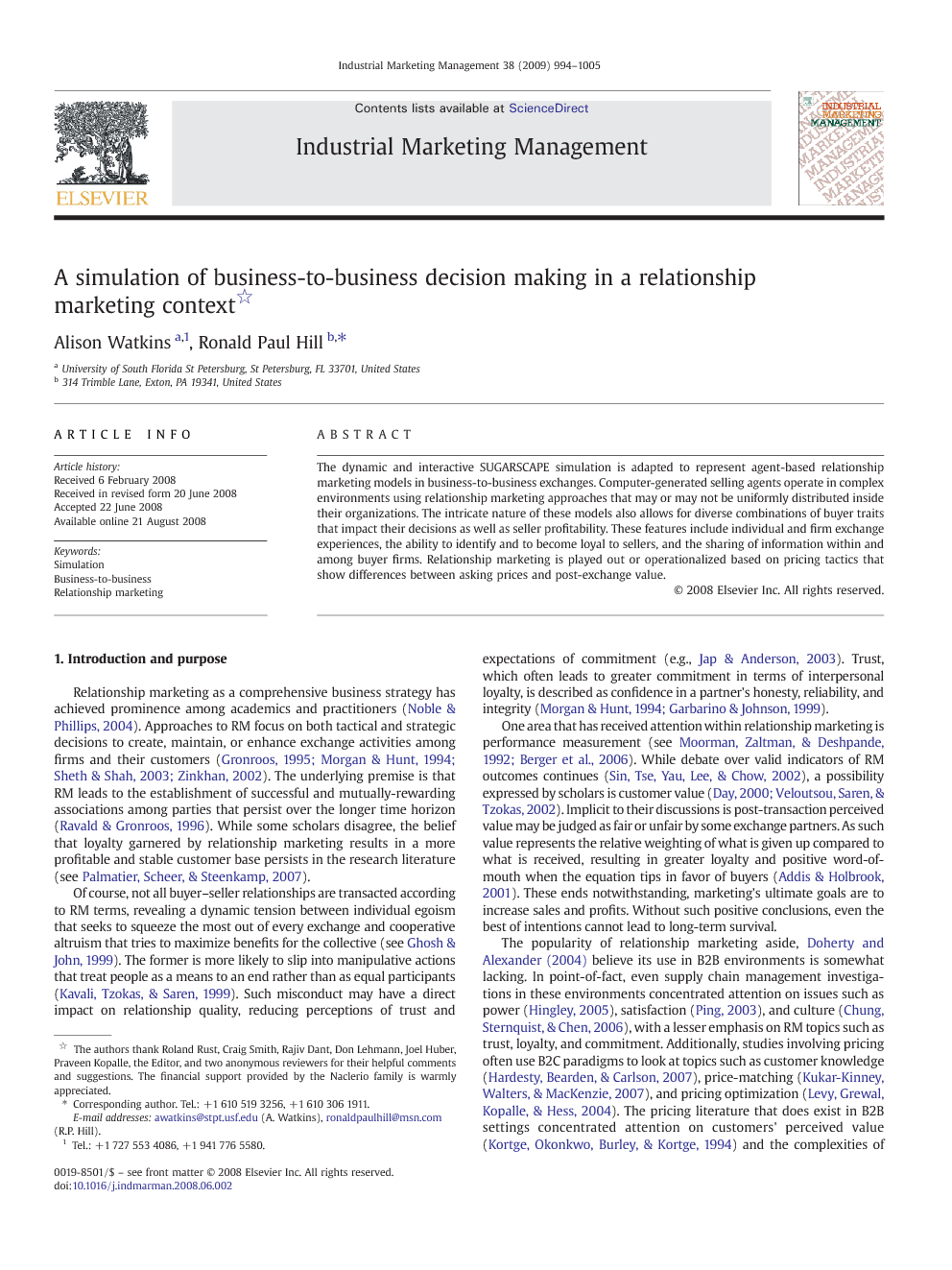 The dynamic and interactive SUGARSCAPE simulation is adapted to represent agent-based relationship marketing models in business-to-business exchanges. Computer-generated selling agents operate in complex environments using relationship marketing approaches that may or may not be uniformly distributed inside their organizations. The intricate nature of these models also allows for diverse combinations of buyer traits that impact their decisions as well as seller profitability. These features include individual and firm exchange experiences, the ability to identify and to become loyal to sellers, and the sharing of information within and among buyer firms. Relationship marketing is played out or operationalized based on pricing tactics that show differences between asking prices and post-exchange value.

Relationship marketing as a comprehensive business strategy has achieved prominence among academics and practitioners (Noble & Phillips, 2004). Approaches to RM focus on both tactical and strategic decisions to create, maintain, or enhance exchange activities among firms and their customers (Gronroos, 1995, Morgan and Hunt, 1994, Sheth and Shah, 2003 and Zinkhan, 2002). The underlying premise is that RM leads to the establishment of successful and mutually-rewarding associations among parties that persist over the longer time horizon (Ravald & Gronroos, 1996). While some scholars disagree, the belief that loyalty garnered by relationship marketing results in a more profitable and stable customer base persists in the research literature (see Palmatier, Scheer, & Steenkamp, 2007). Of course, not all buyer–seller relationships are transacted according to RM terms, revealing a dynamic tension between individual egoism that seeks to squeeze the most out of every exchange and cooperative altruism that tries to maximize benefits for the collective (see Ghosh & John, 1999). The former is more likely to slip into manipulative actions that treat people as a means to an end rather than as equal participants (Kavali, Tzokas, & Saren, 1999). Such misconduct may have a direct impact on relationship quality, reducing perceptions of trust and expectations of commitment (e.g., Jap & Anderson, 2003). Trust, which often leads to greater commitment in terms of interpersonal loyalty, is described as confidence in a partner's honesty, reliability, and integrity (Morgan and Hunt, 1994 and Garbarino and Johnson, 1999). One area that has received attention within relationship marketing is performance measurement (see Moorman et al., 1992 and Berger et al., 2006). While debate over valid indicators of RM outcomes continues (Sin, Tse, Yau, Lee, & Chow, 2002), a possibility expressed by scholars is customer value (Day, 2000 and Veloutsou et al., 2002). Implicit to their discussions is post-transaction perceived value may be judged as fair or unfair by some exchange partners. As such value represents the relative weighting of what is given up compared to what is received, resulting in greater loyalty and positive word-of-mouth when the equation tips in favor of buyers (Addis & Holbrook, 2001). These ends notwithstanding, marketing's ultimate goals are to increase sales and profits. Without such positive conclusions, even the best of intentions cannot lead to long-term survival. The popularity of relationship marketing aside, Doherty and Alexander (2004) believe its use in B2B environments is somewhat lacking. In point-of-fact, even supply chain management investigations in these environments concentrated attention on issues such as power (Hingley, 2005), satisfaction (Ping, 2003), and culture (Chung, Sternquist, & Chen, 2006), with a lesser emphasis on RM topics such as trust, loyalty, and commitment. Additionally, studies involving pricing often use B2C paradigms to look at topics such as customer knowledge (Hardesty, Bearden, & Carlson, 2007), price-matching (Kukar-Kinney, Walters, & MacKenzie, 2007), and pricing optimization (Levy, Grewal, Kopalle, & Hess, 2004). The pricing literature that does exist in B2B settings concentrated attention on customers' perceived value (Kortge, Okonkwo, Burley, & Kortge, 1994) and the complexities of such strategies in global markets (Bolton & Myers, 2003). The next subsection extends our understanding of B2B pricing and provides a research rationale.

In the final analysis, the real value of any B2B model is found in its ability to capture the essence of key variables and their impact upon exchange relationships. Clearly, simulations in general and the artificial life simulation in particular have their strengths and weaknesses. The ability to isolate the impact of relationship marketing constructs and examine their influence on financial success is a real strength, along with the capacity to modify the number of firms, agents, and interaction protocols. Nonetheless, the key weakness is its artificiality, which suggests a lack of the real-world complexity necessary to make particular strategic and tactical decisions. This important drawback implies serious limitations to practicality at the individual firm level, and for usage by managers facing particular circumstances. Yet its application at the industry level represents an important tool for understanding RM effects in their aggregate.