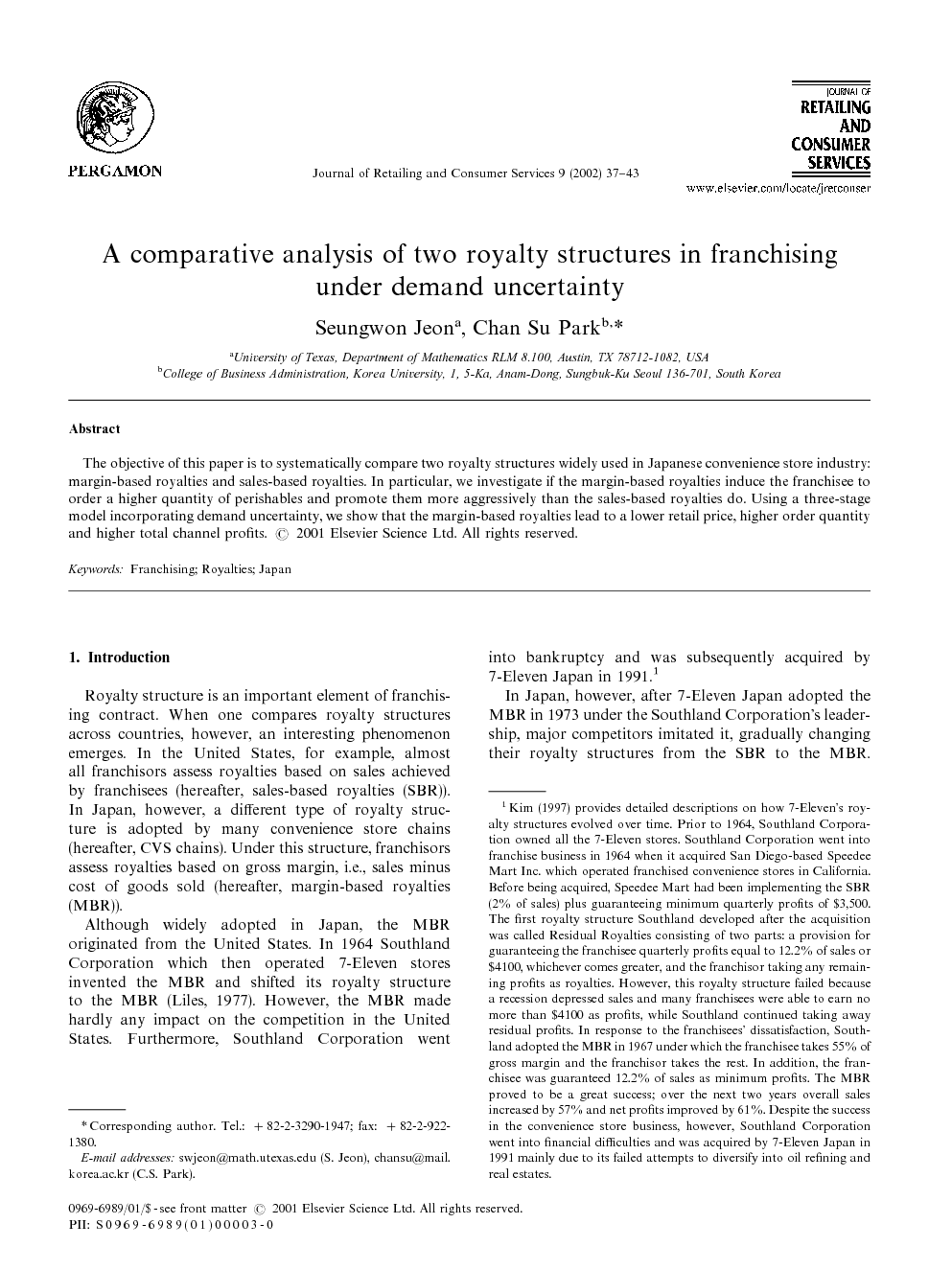 Royalty structure is an important element of franchising contract. When one compares royalty structures across countries, however, an interesting phenomenon emerges. In the United States, for example, almost all franchisors assess royalties based on sales achieved by franchisees (hereafter, sales-based royalties (SBR)). In Japan, however, a different type of royalty structure is adopted by many convenience store chains (hereafter, CVS chains). Under this structure, franchisors assess royalties based on gross margin, i.e., sales minus cost of goods sold (hereafter, margin-based royalties (MBR)). Although widely adopted in Japan, the MBR originated from the United States. In 1964 Southland Corporation which then operated 7-Eleven stores invented the MBR and shifted its royalty structure to the MBR (Liles, 1977). However, the MBR made hardly any impact on the competition in the United States. Furthermore, Southland Corporation went into bankruptcy and was subsequently acquired by 7-Eleven Japan in 1991.1 In Japan, however, after 7-Eleven Japan adopted the MBR in 1973 under the Southland Corporation's leadership, major competitors imitated it, gradually changing their royalty structures from the SBR to the MBR. The MBR has now become a de facto standard in the Japanese CVS industry. Table 1 shows that in 1994, 14 out of 20 CVS chains employed the MBR. Of the remaining six chains, three use the SBR, two use fixed royalties, and one uses mixed royalties.In spite of the widespread adoption of the MBR in Japan, there has been little previous research on what advantages the MBR holds vis-à-vis the SBR. For example, previous studies on royalty structure (e.g., Lal, 1990, Rao and Srinivasan, 1995) have modeled royalties as a fixed percentage of the franchisee's sales. Hence, the MBR has received little, if any, attention from academics. Some practitioners argued that the MBR makes both the franchisor and the franchisee prosper together.2 The rationale goes as follows: under the SBR, the franchisor takes away royalties whether or not the franchisee makes positive margins. Thus even when the franchisee incurs loss due to fierce price competition, the franchisor can still obtain a steady stream of royalties at the expense of the franchisee. Under the MBR, however, the franchisor can take royalties only if the franchisee generates positive margins. If the franchisee incurs loss due to fierce price competition, the franchisor obtains no royalties. Thus the MBR is more equitable to both parties. While plausible, it is not sufficient to explain the advantages of the MBR. For example, most CVS franchising contracts include a provision for guaranteeing minimum profits to the franchisee. Therefore, even when the franchisee incurs loss due to fierce price competition, the franchisor can transfer payments that guarantee a sufficient amount of profits to the franchisee. That is, “equitability” can be restored to a large extent by the provision for guaranteeing minimum profits. If the MBR is to help both the franchisor and the franchisee prosper together, a necessary condition it has to satisfy is that it should generate greater total channel profits than the SBR does. A recent paper by Lal et al. (2000) analyzed the MBR vis-à-vis the SBR using a theoretical model. They showed that the MBR leads to lower retail price, higher sales volume, and higher total channel profits because it is in essence a profit sharing mechanism between the franchisor and the franchisee, thus alleviating the well-known “double marginalization” problem (Spengler, 1950). In addition, they developed an interesting hypothesis that the franchisor is more likely to adopt the MBR as the proportion of sales accounted for by perishable items (e.g., fast food) increases. The rationale is that the MBR induces the franchisee to set a lower retail price, thus achieving higher sales volume and higher order quantities, which is highly desirable given the perishable nature of the product. However, they did not formally prove their hypothesis. Perishable goods such as fast food pose a significant challenge to a CVS franchisor. Fast food is one of the most profitable product lines carried by a CVS, generating a 40% margin which is much higher than the average margin of 25% (Nippon no Franchise Chains, 1997). However, since it is highly perishable, the franchisee tends to order less-than-optimal quantities to minimize losses. Hence the franchisor is eager to find ways to encourage the franchisee to increase order quantities of these highly profitable fast food items and promote them aggressively. If the MBR is indeed shown to increase order quantities, it will provide a significant insight both to practitioners as well as academics. The objective of this paper is to formally investigate the conjecture provided by Lal et al. (2000) by deriving and comparing order quantities under the MBR and the SBR. The perishability problem of fast food items becomes worse with demand uncertainty. We derive order quantities under uncertain demand, employing a three-stage model used in Padmanabhan and Png (1997). Note that Lal et al. (2000) did not allow for uncertain demand nor explicitly model the order quantity decision. Previous research (e.g., Pellegrini, 1986) showed that a returns policy could encourage retailers to carry larger stocks. Thus a stringent test of the MBR would be to show that the optimal order quantities under the MBR are higher than those under the SBR even after implementing a full returns policy. Assuming a full returns policy, our results show that the optimal order quantities under the MBR are higher than those under the SBR, supporting the conjecture by Lal et al. (2000). In the next section, we present the model structure and assumptions. Section 3 shows derivations of the results and discusses their implications. In Section 4, we close with a summary and directions for future research.

Royalty structure is an important element of franchising contract. In this paper, we systematically investigated a conjecture that the margin-based royalties (MBR) would encourage the franchisee to order larger quantities of goods from the franchisor than the sales-based royalties (SBR) (Lal et al., 2000). This conjecture holds a considerable promise to convenience store industry given the highly perishable but highly profitable nature of fast food items. Using a three-stage stylized model incorporating demand uncertainty (Padmanabhan and Png, 1997), we showed that the MBR stocking level is indeed higher than the SBR stocking level. In addition, we found that the MBR leads to lower retail price and higher total channel profits, showing the results obtained under demand certainty (e.g., Lal et al., 2000) can be generalized to demand uncertainty. Contrary to the “prosper together” claim often made for the MBR, we found that the franchisor gets better off under the MBR at the expense of the franchisee. There are interesting opportunities for future research in this area. We have not considered competition at the franchisee level nor at the franchisor level.4 It would be useful to extend the model to include marketing efforts made by the franchisee (e.g., services) or the franchisor (e.g., brand-name investment). More significantly, for tractability, we treated the royalty rate as an exogenous variable rather than as an endogenous variable. It would be worthwhile to make the royalty rate endogenous (e.g., Rao and Srinivasan, 1995) and explore the solution process. Similarly, while we assumed that the franchisor provides a full returns policy, it would be interesting to allow for a partial returns policy and treat it as an endogenous variable. Finally, our results are derived from a linear demand function (see Eq. (1)) specification. However, other forms of demand function might lead to different outcomes (e.g., Choi, 1991).