عنوان انگلیسی
How many franchises in a market?
دانلود فوری مقاله + سفارش ترجمه 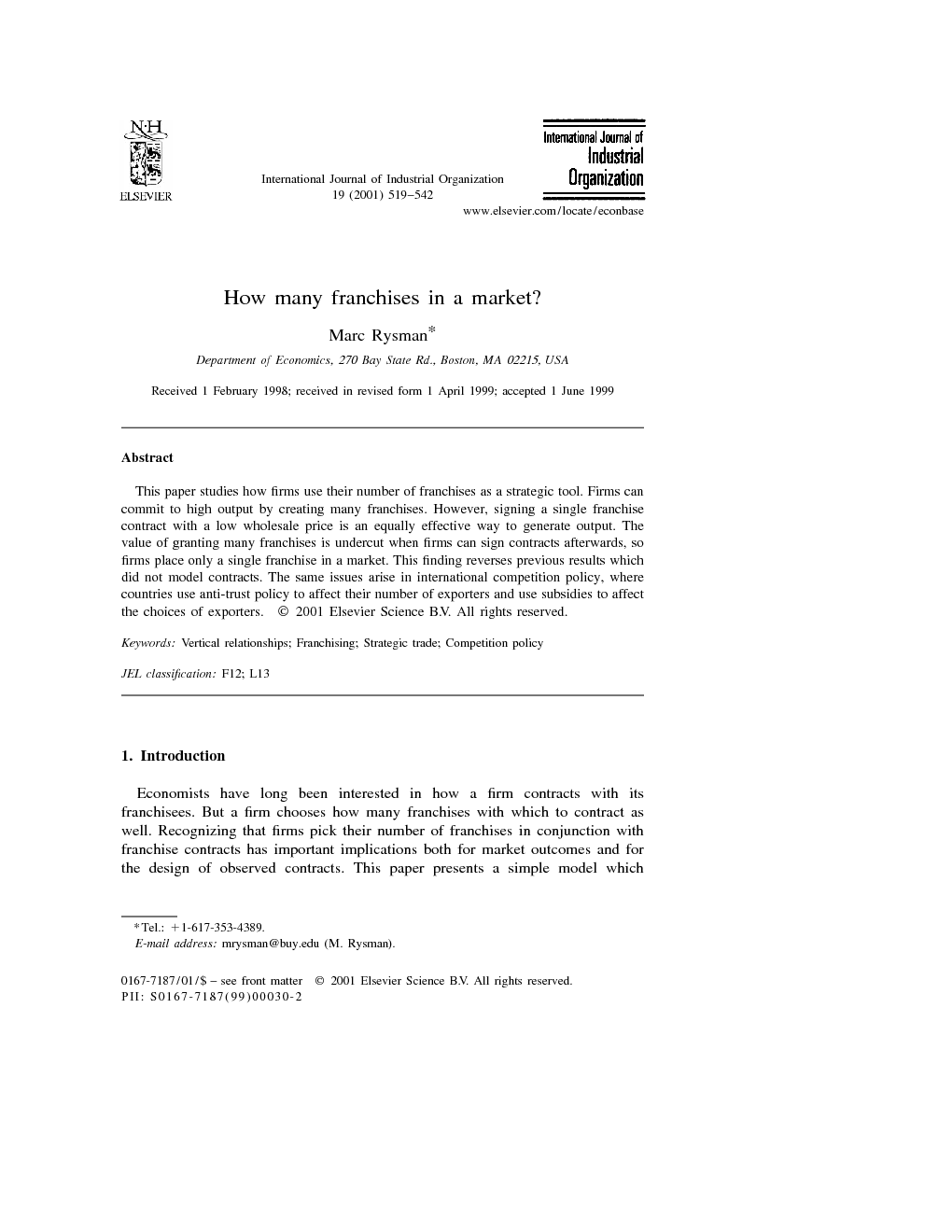 This paper studies how firms use their number of franchises as a strategic tool. Firms can commit to high output by creating many franchises. However, signing a single franchise contract with a low wholesale price is an equally effective way to generate output. The value of granting many franchises is undercut when firms can sign contracts afterwards, so firms place only a single franchise in a market. This finding reverses previous results which did not model contracts. The same issues arise in international competition policy, where countries use anti-trust policy to affect their number of exporters and use subsidies to affect the choices of exporters.

This paper recognizes that in many important principal–agent situations, principals choose how many agents with which to deal in addition to how to contract with the agents. Building on previous work by Polasky (1992) and Brander and Spencer (1985), this paper presents a model which endogenizes the choice over the number of agents in an environment in which principals can write non-linear contracts with their agents. The paper first analyzes a game where principals choose the number of agents but are restricted to being unable to adjust their per-unit price or their fixed fee. Both principals want to have more agents than the other in order to succeed in the quantity-setting game in the final stage. Next, the paper introduces a two-part tariff and shows that setting a two-part tariff and setting the number of agents are interchangeable ways to elicit high production from agents, thereby gaining surplus for the principal. When one tool is set optimally, there is no gain to adjusting the other tool. This feature generates multiple equilibria in the game where principals choose the number of agents and the two-part tariff simultaneously. However, equilibrium is unique in the game where principals choose their number of agents before choosing two-part tariffs. In this case, principals pick only one agent. The reason for this result is that a principal which picks a high number of agents in the first stage simply adjusts its two-part tariff (which is always being set optimally) in the second stage so that there is no direct effect of the choice over number of agents. But choosing a high number of agents does lead the competitor to choose a low per-unit price, which hurts the principal’s profit. This paper presents two interpretations. The paper interprets the model as one of franchisors choosing how many franchises to set up in a given market, and one of governments using competition policy as a tool for a strategic trade. Under both of these interpretations, this paper makes many simplifying assumptions which deserve further research. By taking a simple demand function as given, this paper abstracts from any issues of location and of how a market is defined. An interesting extension of the franchising interpretation would be to explore how issues of two-part tariffs and outlet-number would interact in an address model, where geography and ‘market scoping’ could be modeled explicitly. Under the competition-policy interpretation, allowing the domestic government to choose exactly the number of domestic competitors is useful as a first pass at this question but is obviously too crude. In practice, a government can choose to implement tough anti-trust laws or choose not to enforce existing laws, but it cannot select the precise number of domestic firms. A logical next step is to develop a more textured model of how a government can affect the number of domestic firms.