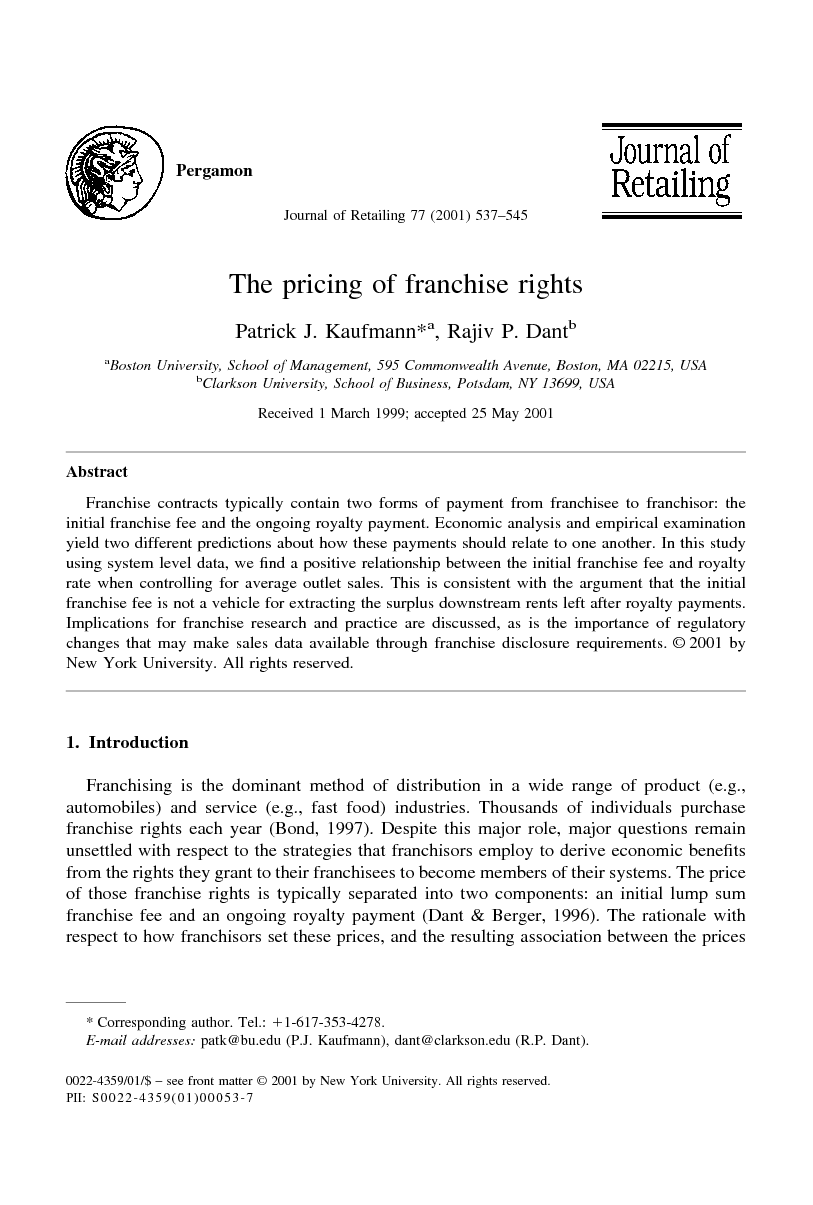 Franchise contracts typically contain two forms of payment from franchisee to franchisor: the initial franchise fee and the ongoing royalty payment. Economic analysis and empirical examination yield two different predictions about how these payments should relate to one another. In this study using system level data, we find a positive relationship between the initial franchise fee and royalty rate when controlling for average outlet sales. This is consistent with the argument that the initial franchise fee is not a vehicle for extracting the surplus downstream rents left after royalty payments. Implications for franchise research and practice are discussed, as is the importance of regulatory changes that may make sales data available through franchise disclosure requirements.

Franchising is the dominant method of distribution in a wide range of product (e.g., automobiles) and service (e.g., fast food) industries. Thousands of individuals purchase franchise rights each year (Bond, 1997). Despite this major role, major questions remain unsettled with respect to the strategies that franchisors employ to derive economic benefits from the rights they grant to their franchisees to become members of their systems. The price of those franchise rights is typically separated into two components: an initial lump sum franchise fee and an ongoing royalty payment (Dant & Berger, 1996). The rationale with respect to how franchisors set these prices, and the resulting association between the prices for these two components, is one of the core theoretical and empirical issues in literature of this field. Some researchers see these two payment methods as the twin parts of a mechanism to insure that franchisees receive no more than a normal profit on their investment in a franchise. By systematically adjusting the franchise fee and the royalty rate, the franchisor can provide just the right incentive for the franchisee to work industriously, but not obtain excess profits (Blair & Kaserman, 1982). In this view, the two payment types should be negatively correlated with each across different franchise systems. Others, however, predict a positive relationship. Both price components could reflect the level of investment that the franchisor invests in building its brand and in training its franchisees to support this brand properly. If this is correct, we should see a positive relationship in the relationship across franchise systems (Lafontaine & Shaw, 1999). Empirical investigation of this controversy has been problematic. The relationship needs to be tested at the franchise system level (Sen, 1993), but data on the necessary measures are seldom available at this level. Sources of secondary data at this level to the time of this research excluded the key information necessary to evaluate the franchise payment question directly. In research leading to this article, we test the relationship between the two components of franchise prices with firm level primary data and demonstrate the value of a more detailed data set for franchise research. We begin with a brief review of the two theoretical perspectives, and specify the competing hypotheses. We then report upon an empirical test of those hypotheses, discuss the results in light of franchise theory and practice, and the need for data of the type we have gathered.

Our findings indicate that franchisors do not use the initial franchise fee to appropriate the excess value of the profit stream net of the royalties. Instead, the franchise fee and the royalty rate move in concert even when we control for the level of sales. There are implications from these findings for franchise research, practice and policy. First, if the initial fee is not used to recover surplus value net of royalties, then it does not act as a performance bond for the franchisee. This may be due to the fact that the managerial discretion of franchisees is not particularly important in the fast food industry. Perhaps in this industry, the industrialization of service is so far advanced that the power of the trademark dominates all local execution. In other words, royalties are the key incentive mechanism in this industry because the franchisor is the critical agent in the double-sided moral hazard problem. Another explanation could be that there are such generally high levels of profits to be derived from continued association with franchise systems, that termination alone is sufficient to maintain control over the franchisee even without any forfeiture of invested funds. In other words, the efficiency wage argument used in Kaufmann and Lafontaine (1994) to explain the downstream rents in the McDonald’s system may extend generally to other franchise systems. This may make sense given the particularly salient reputation effects of initial fee forfeiture and the likelihood that franchisors would face difficulties in the courts attempting to enforce onerous forfeiture clauses. These results, therefore, raise some interesting questions regarding the theoretical role of franchise fees and royalties and imply the usefulness of future research in the area. Two issues emerge for further consideration. The first has regard to the means whereby the franchisor insures that the franchisee does not derive profits that in reality belong to the franchisor because of its investment in the brand. On the one hand, some franchisors may deliberately leave the opportunity for higher earnings to franchisees from greater sales as further incentive. This correlates well with the Kaufmann and Lafontaine (1994) finding that this policy was apparently being followed by McDonalds. However, franchisors may also use other means to insure that excess rents do not widely occur at the franchisee level. For example, close monitoring may enforce franchisee rules with respect to performance and investment requirements. These could have the effect of increasing sales, but at marginal costs that would not have been voluntarily incurred. With respect to the second issue, if the franchise fee is not set to retrieve surplus value, what basis is available to the franchisor in setting this fee? Clearly wealth constraints on franchisees will be felt at the point of joining a franchise system, much more so with the initial franchise fees and not at the point of paying ongoing royalties. Reducing the initial franchise fee to reflect solely the costs of attracting, screening and training franchisees, therefore, should increase the potential pool of applicants. From this perspective, some franchisors may actually subsidize the cost of acquiring high quality franchisees. Franchisors may also publicize the use of a cost or lower basis for the franchise fee, even when associated with relatively high royalty rates, as a means of assuring prospective franchisees that they are not being exploited. The research issue posed by this question is obviously to seek data from franchisors as to the cost of recruiting, training, and locating franchisees. The public policy implications of this study relate to the value of the measure of average outlet sales by a franchise system. With such information, researchers may be better able to understand franchisor behavior and make superior recommendations with respect to appropriate regulation. Prior studies of the relationship of franchise fees and royalty rates may have been inconclusive because of the absence of these data. Unfortunately, at the time of this research, the likelihood of researchers obtaining such data directly from franchisors has now diminished. Franchisors have been inundated and response rates have plummeted. The CEO of a well-known franchise system recently said that he no longer considers answering surveys with more than three or four questions (Alder, 2001). This feeling is becoming widespread within the franchise community. Within this discouraging context, however, there is hope for an alternate source of data. The FTC’s disclosure rule (Federal Trade Commission, 1979) and the North American Security Administrators Association’s (NASAA) Uniform Franchise Offering Circular (UFOC) are designed to protect prospective franchisees by providing them with the data necessary to make informed choices. These data become available to researchers because franchisors are required to file such disclosures as public documents in a number of states. Although permitted to make claims about outlet sales if they had a “reasonable basis” for doing so, few franchisors have yet to provide the information. At the time of writing this article, regulatory changes under consideration by the FTC and NASAA, however, could make these data available. Both agencies are exploring the advisability of making mandatory sales disclosures for franchisors an integral part of the UFOC Spandorf 1995 and Vincent and Kaufmann 1996. There is no agreement yet as to what form any mandated disclosure would take, that is, whether it would include just average outlet revenue or some type of proforma income statement for the average outlet. However, if sales or earnings claims become a required part of the franchisor disclosure document, or only encourage a greater proportion of franchisors voluntarily to make franchisees’ sales public, prospective franchisees will have access to superior information on which to make their purchase decisions. And, because researchers will have significantly greater access to a key franchising variable, franchisees and regulators will both reap additional benefit from an enhanced understanding of franchising economics.