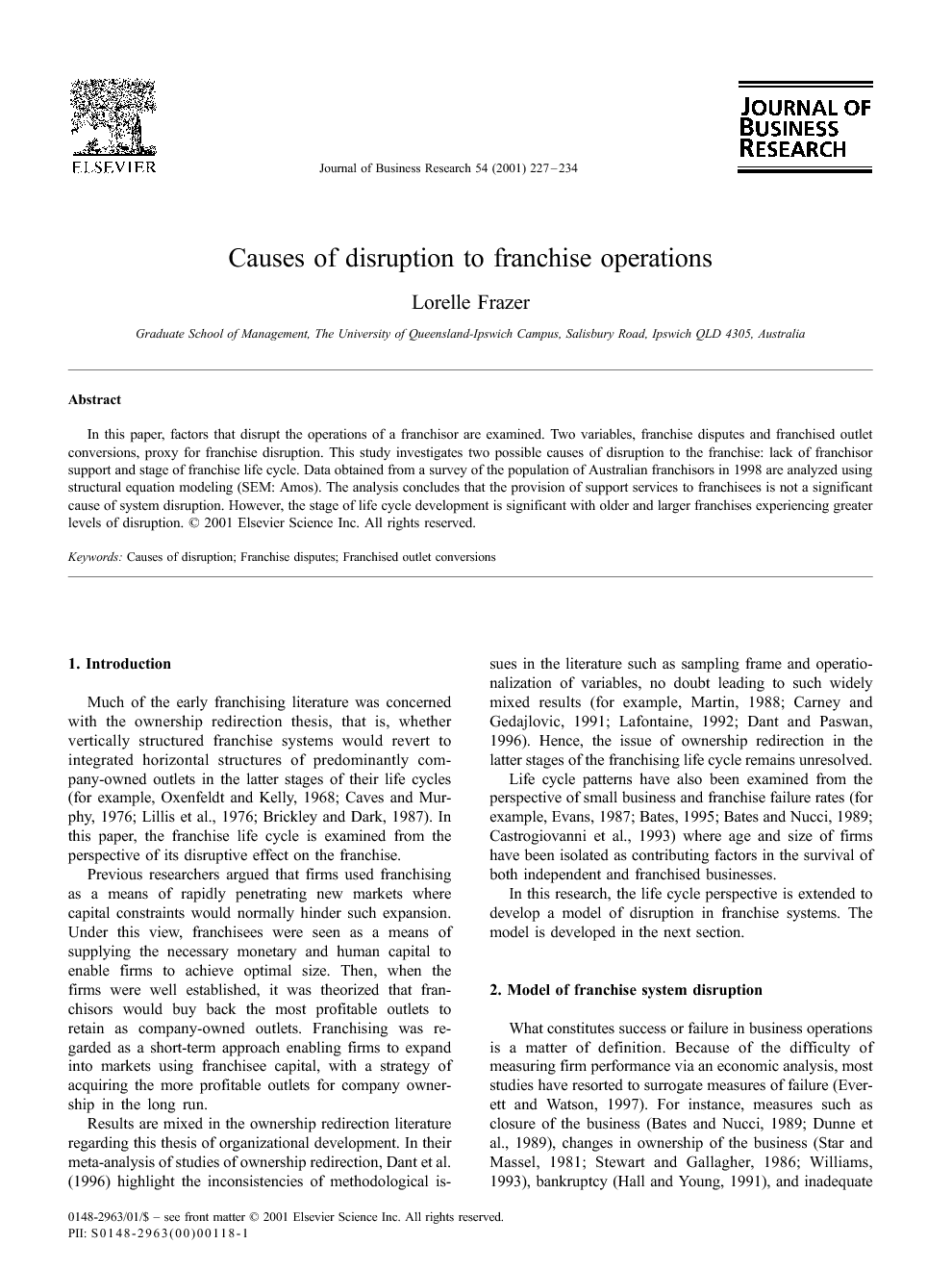 In this paper, factors that disrupt the operations of a franchisor are examined. Two variables, franchise disputes and franchised outlet conversions, proxy for franchise disruption. This study investigates two possible causes of disruption to the franchise: lack of franchisor support and stage of franchise life cycle. Data obtained from a survey of the population of Australian franchisors in 1998 are analyzed using structural equation modeling (SEM: Amos). The analysis concludes that the provision of support services to franchisees is not a significant cause of system disruption. However, the stage of life cycle development is significant with older and larger franchises experiencing greater levels of disruption.

Much of the early franchising literature was concerned with the ownership redirection thesis, that is, whether vertically structured franchise systems would revert to integrated horizontal structures of predominantly company-owned outlets in the latter stages of their life cycles (for example, Oxenfeldt and Kelly, 1968, Caves and Murphy, 1976, Lillis et al., 1976 and Brickley and Dark, 1987). In this paper, the franchise life cycle is examined from the perspective of its disruptive effect on the franchise. Previous researchers argued that firms used franchising as a means of rapidly penetrating new markets where capital constraints would normally hinder such expansion. Under this view, franchisees were seen as a means of supplying the necessary monetary and human capital to enable firms to achieve optimal size. Then, when the firms were well established, it was theorized that franchisors would buy back the most profitable outlets to retain as company-owned outlets. Franchising was regarded as a short-term approach enabling firms to expand into markets using franchisee capital, with a strategy of acquiring the more profitable outlets for company ownership in the long run. Results are mixed in the ownership redirection literature regarding this thesis of organizational development. In their meta-analysis of studies of ownership redirection, Dant et al. (1996) highlight the inconsistencies of methodological issues in the literature such as sampling frame and operationalization of variables, no doubt leading to such widely mixed results (for example, Martin, 1988, Carney and Gedajlovic, 1991, Lafontaine, 1992 and Dant and Paswan, 1996). Hence, the issue of ownership redirection in the latter stages of the franchising life cycle remains unresolved. Life cycle patterns have also been examined from the perspective of small business and franchise failure rates (for example, Evans, 1987, Bates, 1995, Bates and Nucci, 1989 and Castrogiovanni et al., 1993) where age and size of firms have been isolated as contributing factors in the survival of both independent and franchised businesses. In this research, the life cycle perspective is extended to develop a model of disruption in franchise systems. The model is developed in the next section.

In this paper, evidence has been presented that the stage of development of franchise life cycle is related to the incidence of disruption in the franchise. This finding has important implications for franchisors and franchisees. Whereas anecdotal evidence suggests that it is less risky for potential franchisees to invest in a mature and well-established franchise, these empirical findings indicate that larger, older franchises are more likely to experience disruption in the form of serious disputes or through outlet conversions. Hence, there is a trade-off that investors must consider when choosing a suitable franchise. Although this research does not address the level of risk of entering a franchise in any stage of its life cycle, it does provide some evidence that the complexities associated with managing mature franchise systems result in communication problems that are disruptive to its operations. Future research into franchise system disruption could investigate other possible factors of influence on the dependent variable, such as industry effects, which could not be examined in this research because of the small number of respondents in some industries. In addition, alternative measures of the dependent variable ‘disruption’ could be examined, as the construct has not previously been defined.