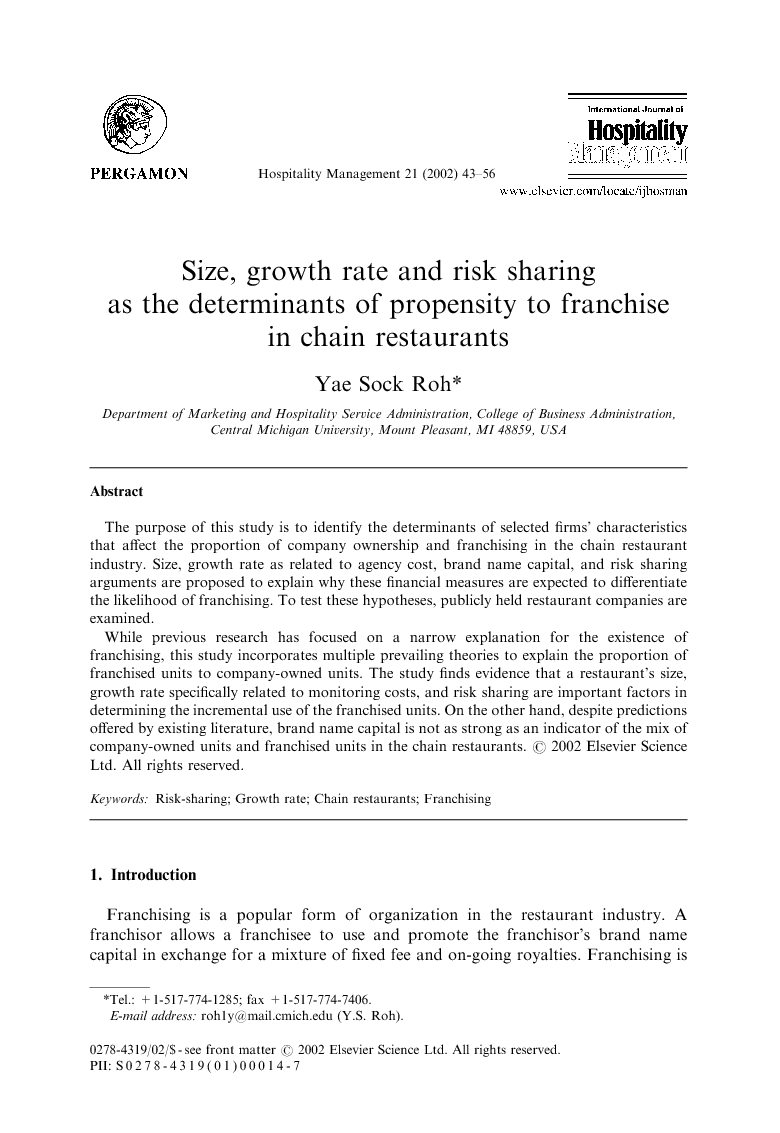 The purpose of this study is to identify the determinants of selected firms’ characteristics that affect the proportion of company ownership and franchising in the chain restaurant industry. Size, growth rate as related to agency cost, brand name capital, and risk sharing arguments are proposed to explain why these financial measures are expected to differentiate the likelihood of franchising. To test these hypotheses, publicly held restaurant companies are examined. While previous research has focused on a narrow explanation for the existence of franchising, this study incorporates multiple prevailing theories to explain the proportion of franchised units to company-owned units. The study finds evidence that a restaurant's size, growth rate specifically related to monitoring costs, and risk sharing are important factors in determining the incremental use of the franchised units. On the other hand, despite predictions offered by existing literature, brand name capital is not as strong as an indicator of the mix of company-owned units and franchised units in the chain restaurants.

Franchising is a popular form of organization in the restaurant industry. A franchisor allows a franchisee to use and promote the franchisor's brand name capital in exchange for a mixture of fixed fee and on-going royalties. Franchising is perceived as a powerful expansion vehicle when the franchisor desires to grow under limited managerial resources. While some restaurants do not engage in franchising, to a large extent, a significant number of chain restaurants are actively involved in franchising as a form of strategic management for the firm. However, it is interesting to recognize that the proportion of company-owned units versus franchised units varies substantially across each individual franchisor. What might explain the mixture of company-owned units versus franchised units? The purpose of this study is to identify the determinants of selected financial characteristics that affect the proportion of company ownership and franchising in the chain restaurant industry. Motivating this inquiry is the observation that franchising has become an increasingly important and flourishing element in the restaurant industry. In its recent Sixth Annual Chain Restaurant Industry Review and Outlook and Sixth Annual Chain Restaurant Industry Review and Outlook (http://www.ffca.com/res_irev.htm), the Franchise Finance Corporation of America predicts increased use of franchising by restaurants as a result of increased restaurant divestitures by publicly held companies. Traditional arguments for franchising generally center on specific issues and problems encountered by younger, smaller companies that do not have sufficient capital for rapid expansion (Oxenfeldt and Kelly, 1968–1969; Hunt, 1973; Caves and Murphy, 1976; Martin, 1988; Lundberg, 1994; Manolis et al., 1995; Dant et al., 1998). In this scenario, franchising serves as financing although it is an indirect and non-traditional means of raising capital. In effect, financial resources provided by franchisees are vital for small, immature franchisors. Another explanation for franchising is the growth rate specifically related to costs of monitoring labor. For example, early stage firms with limited managerial capabilities utilize franchising contracts as a means of relieving resource constraints upon a firm's growth. Growth of the company is accompanied by increases in labor, which require a firm to bear additional costs in monitoring employees. However, the main advantage of a franchising contract is the lower cost of monitoring and governing the actions of employees. Thus, franchising is an efficient form of organization when the marginal cost of monitoring company-owned store managers is greater than the marginal cost of undertaking a franchise agreement (Rubin, 1978; Brickley and Dark, 1987; Brickley et al., 1991). Additionally, a firm's tendency to franchise is likely to be related to the value of a firm's brand name capital. The primary role of brand name capital is to convey information about consistent quality that the consumer might find costly to obtain otherwise (Caves and Murphy, 1976; Norton, 1988a; Aaker, 1991). Fong (1987) argues that a franchise system makes it possible to distribute brand name capital more efficiently. This leads to the belief that companies engaged in franchising possess identifiable brand names which assure the customer uniform product quality (Brickley and Dark, 1987). Risk sharing is the fourth explanation for the prevalence of franchising. According to this view, franchising agreements allow for an efficient allocation of risk between the franchisee and franchisor (Lafontaine, 1992; Lafontaine and Bhattacharyya, 1995). The franchisee minimizes the risk of operations by utilizing a franchisor's national identity, national advertising and training programs and materials. At the same time, compared to a wholly company-owned restaurant system, franchise systems are considered less risky because they can be viewed as a portfolio of operating units that can be adjusted in response to changing costs and revenue opportunities (Thomas et al., 1990). In sum, these multiple theories of franchising and their supporting empirical evidence have evolved independently and occasionally draw competing even conflicting conclusions. As a result, these discrepancies have led to theoretical and practical gaps in this body of literature and the conclusive determinants of franchising are still open to question. The continued accumulation of contradictory findings suggests that a fundamental understanding of franchising is lacking. In this regard, it is important to take stock of the current body of knowledge and integrate the process and content schools of thoughts in order to provide a stronger theoretical and empirical framework. The contribution of this research is that previous franchising studies have focused primarily on a micro paradigm to explain franchisors’ decisions to enter into franchise contracts. However, none of the theories have presented a model with strong explanatory power (Combs and Castrogiovanni, 1994). This study integrates existing competing theories from different bodies of literature and provides more comprehensive explanations for franchising by utilizing selected financial measures. Such an examination should enhance our understanding of the effect of key financial factors that determine the propensity to franchise. The paper is organized as follows. Section 2 reviews prior research and proposes testable hypotheses based on the existing literature. Section 3 discusses the sample and measurement of the variables used in this study. Empirical results are presented in Section 4. Finally, Section 5 provides brief concluding remarks.

The limitations of this research should be noted at the beginning of the conclusions section. First, the study was restricted to a limited number of chain restaurants whose financial data was publicly accessible from Standard and Poor's Compustat. However, a large number of mom and pop restaurant franchisors’ financial information and organizational structure were not readily available for analysis. Second, the study did not analyze restaurants’ 0% propensity to franchise. Excluding 0% to franchise, the paper may offer only a partial analysis. Thus, the results of the study require careful interpretation. For several decades, theoretical and empirical research in franchising has reflected a clear gap between the content and process schools of thought and, therefore , have yielded inconclusive results. These discrepant findings have been largely sustained by the assumption that the theoretical and methodological differences across the schools of thought are insurmountable. Although competing theories and empirical results are found to be mutually exclusive, as suggested by Combs and Ketchen (1997), “the combined perspectives are needed to fully explain the choice of organizational form”. Consequently, the purpose of research has been to question the validity of these assumptions by utilizing a multi-lens approach to past work. A multiple-view approach is incorporated to conduct a rigorous review of prevailing franchising theory and practice in order to identify underlying theoretical synergies and limitations. In conclusion, the research identified that size, growth rate as related to the monitoring costs, and risk are important factors that contribute to the proportion of company-owned units versus franchised units in the restaurant industry. The propensity to franchise appears to (1) be small in size; (2) encounter rapid growth as they require significant increases in financial, human and informational capital; and (3) intend to share the risk with the franchisee. Most importantly, the results of this research strongly suggest that there is no dominant paradigm underlying governance research and prescription of the likelihood of franchising. Stated differently, as the financial structures and organizational capacity vary substantially, franchisors may pursue heterogeneous strategies to achieve their specific firms’ goals. It appears that restaurant companies are willing to adjust the mix of company-owned units to franchised outlets as they mature. In that regard, one line of future research suggested by the results of this study is to extend the current empirical tests in order to identify differences in the proportion of the franchised units on the basis of the maturity of the restaurant. If immature companies are likely to engage in franchising in order to grow quickly, what is the optimal mix of franchised units versus company-owned units, and how do restaurants adjust the proportion of franchised and company-owned units to maximize the organizational efficiency? Second, it is important to identify at what point in time restaurants decide to undertake franchising and what characteristics may motivate restaurants to commit to enter into franchising. Researchers who take the next steps in examining these specific aspects of the strategic management of franchising can offer new, theoretically rich, and methodologically rigorous understandings of these issues.