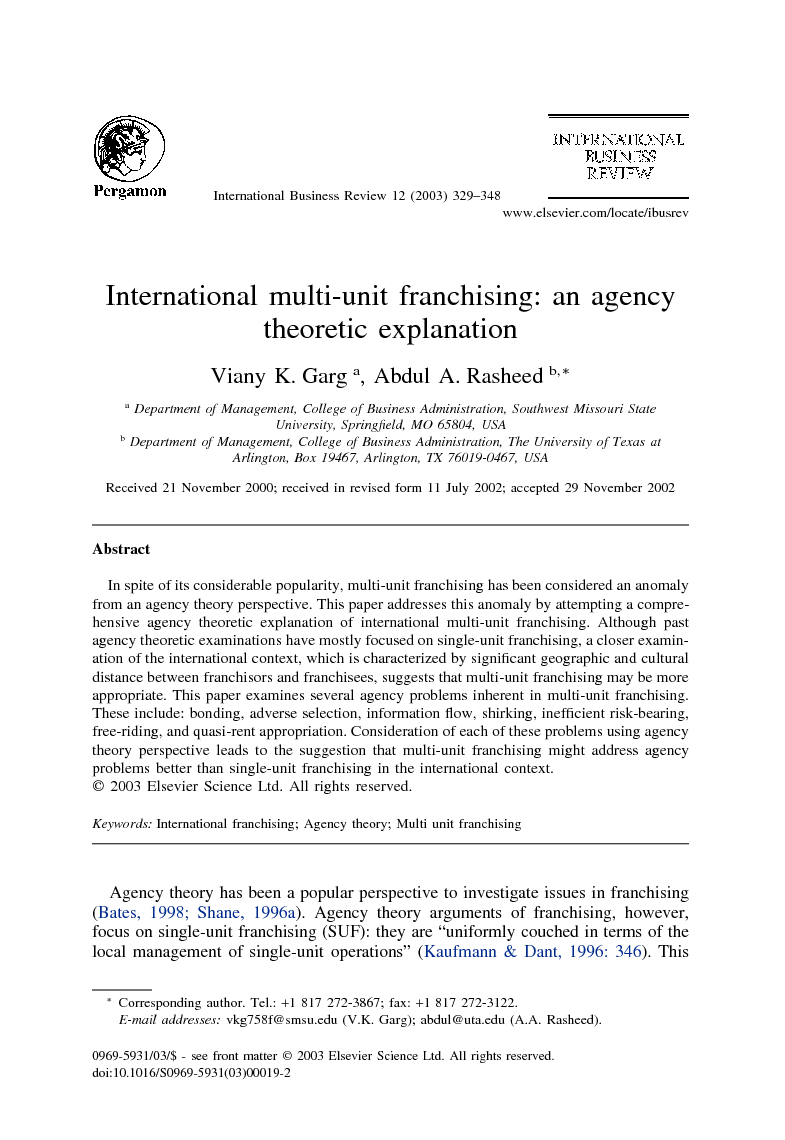 Agency theory has been a popular perspective to investigate issues in franchising (Bates, 1998 and Shane, 1996a). Agency theory arguments of franchising, however, focus on single-unit franchising (SUF): they are “uniformly couched in terms of the local management of single-unit operations” (Kaufmann & Dant, 1996: 346). This preoccupation with single unit franchising seems surprising, given that multi-unit franchising (MUF) is ubiquitous, especially in location-based industries where franchising is most popular. For example, using Bureau of the Census data, Bates (1998:114) noted that “among the recently started restaurant franchise units, 84% were units of multi-establishment corporations”. Kaufmann and Dant (1996: 346) note several other examples leading to the conclusion: “It is clear that the typical location-based franchising system (of which the fast-food franchises are the prime and modal example) is populated with multi-unit franchisees”. In spite of the widespread prevalence of MUF, it “remains a curious anomaly” (Kaufmann & Dant, 1996: 346), without a clear theoretical explanation. Prior research, by and large, has focused exclusively on single-unit franchising on the assumption that agency problems are resolved by having owner operators. The moment they become multi-unit systems, individual units are managed by employees, thereby reintroducing the agency problem. The objective of this paper is to explain this anomaly, using an agency theoretic perspective. We do this in the specific context of international franchising, where MUF appears to be particularly dominant. That is, we examine the question: Why do international franchisors prefer MUF over SUF? By examining the rationale for MUF from an agency theoretic perspective, we complement the work of Kaufmann and Dant (1996) which suggests that MUF, though an anomaly from an agency theoretic perspective, has merits over SUF as an entry mode from a capital acquisition perspective. Given the success of agency theory to explain various aspects of the principal-agent relationships that characterize the interactions between a franchisor and a franchisee, we believe that this theoretical perspective should be able to explain the preference international franchisors have demonstrated for MUF. Eisenhardt (1989: 59) succinctly expressed the wide scope of agency theory when she wrote: “[T]he domain of agency theory is relationships that mirror the basic agency structure of a principal and an agent who are engaged in cooperative behavior, but have differing goals and differing attitudes toward risk”. This scope is no exaggeration, as suggested by a large volume of both conceptual and empirical work in diverse areas (see Sharma, 1997, for some examples). Therefore, the status of MUF as an “anomaly” seems attributable more to the lack of a focused, in-depth theoretical attempt to explain MUF than due to any inadequacy of agency theory itself. Multi-unit franchising is different from single-unit franchising in that franchisees own, operate, or control more than one outlet (Kaufmann & Dant, 1996). Even within MUF, there are many different types. Incremental or sequential MUF occurs when a single-unit franchisee within a successful system is awarded additional units based upon the performance of existing units. Master franchising, on the other hand, involves the franchisor granting a franchisee rights to multiple units from the outset (Kaufmann, 1992). Area development agreements are a special type of master franchising which requires the master franchisee to open and operate multiple units within a geographical area according to a prespecified schedule. Individual outlets, in turn, are run by employee managers hired by the master franchisee (Kaufmann & Dant, 1996). In this paper we attempt to take an important, long overdue first step towards developing an agency-based explanation for MUF. Our specific focus is on international franchising, because (a) international franchising is growing much faster than domestic franchising (Shane, 1996b) and (b) this context offers a unique setting for the comparative evaluation of the magnitude of agency problems associated with MUF and SUF. In the domestic context, we see instances of both single-unit and multi-unit franchises. We assume that the choice, therefore, is essentially driven by industry-specific factors. In the international context, on the other hand, the preference appears to be predominantly for multi-unit systems. Therefore, we assume that internationalization introduces a set of management considerations that are unique to foreign operations. Examining the rationale for MUF in the international context would therefore permit extensions and useful insights for the future development of a more generalizable theory of multi unit franchising. For example, just as capabilities developed to address agency problems in the domestic context have proven valuable while expanding internationally (Shane, 1996b), we believe that capabilities and insights developed through international franchising may also lead to improved management of franchising operations at home. The rest of the paper is organized as follows. First, a review of agency theory perspective of franchising is presented. Then, we examine international multi-unit franchising from this perspective. In that section, we discuss the following agency problems: bonding, adverse selection, information flow, shirking, inefficient risk-bearing, free-riding, and quasi-rent appropriation. Finally, implications for research and practice are discussed.