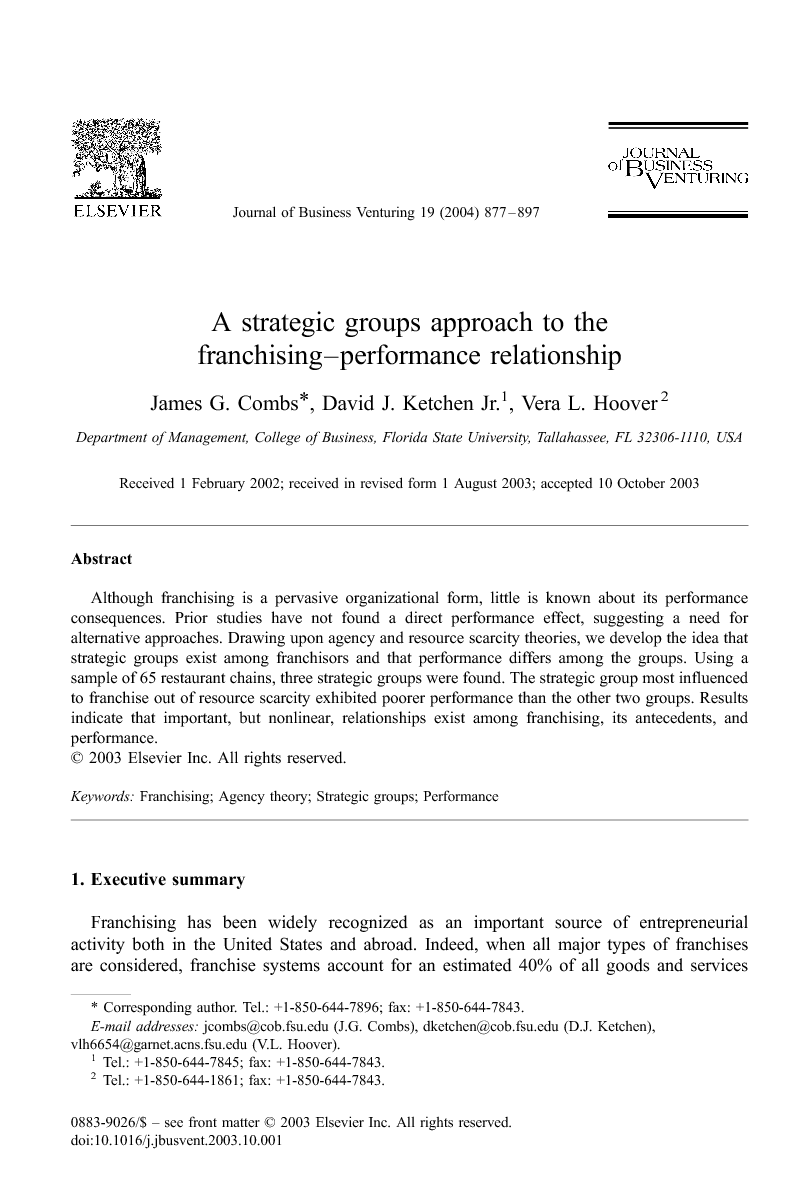 Although franchising is a pervasive organizational form, little is known about its performance consequences. Prior studies have not found a direct performance effect, suggesting a need for alternative approaches. Drawing upon agency and resource scarcity theories, we develop the idea that strategic groups exist among franchisors and that performance differs among the groups. Using a sample of 65 restaurant chains, three strategic groups were found. The strategic group most influenced to franchise out of resource scarcity exhibited poorer performance than the other two groups. Results indicate that important, but nonlinear, relationships exist among franchising, its antecedents, and performance.

Whether to offer franchises is an important decision for many ventures. Franchising is an organizational form wherein one firm (the franchisor) allows a second (the franchisee) to market goods or services under the franchisor's brand name and to use its business practices (Stanworth and Curran, 1999). While used in many industries, franchising is most common in settings where the nature of the product or service prevents firms from separating production and consumption (e.g., food service, lodging). Such firms must offer geographically dispersed outlets located near customers (Kaufmann and Dant, 1998). Each outlet may be structured as a company-owned outlet managed by an employee manager or as a franchise-owned outlet managed by an independent entrepreneur. The latter is a popular choice; franchisees account for over 40% of the retail goods and services sold in the United States (International Franchise Association, 1994).3 As such, franchising is an important source of entrepreneurship in the United States (Shane and Hoy, 1996) and abroad (Fladmoe-Lindquist, 1996). Franchisors advance innovation and entrepreneurship by defining new market niches and by developing new operating systems within existing niches (Kaufmann and Dant, 1998). Whereas franchisees enter into franchising to reduce their risk of failure, they typically have much in common with other entrepreneurs (Stanworth and Curran, 1999), and they are an important source of innovation and local adaptation for highly standardized franchise systems (Kaufmann and Eroglu, 1998). Studies have examined the performance of franchisees vis-à-vis franchisors (e.g., Michael and Moore, 1995) or independent entrepreneurship (e.g., Williams, 1998). However, only three studies have considered the performance effects of the franchisor's decision to use franchising. Shane (1996) found that offering franchises boosts outlet growth and enhances the probability of survival among young franchisors. Although survival is a vital outcome, performance differences among surviving firms are also of great interest. Michael (2002) furnished indirect evidence of a franchising–performance relationship. Firms that quickly began franchising gained market share, which in turn enhanced financial performance. Combs and Ketchen (1999a) searched for, but did not find, a linear relationship between reliance on franchising and performance. Given franchising's role in the economy, the lack of research establishing the franchising–performance relationship seems to present a gap in the literature. An alternative to searching for linear relationships is to examine how different groups of franchisors perform. All firms do not adopt franchising for similar reasons, but rather groups of firms share similar approaches (Carney and Gedajlovic, 1991). In general, firms within an industry that follow a similar approach or strategy have been termed strategic groups (Porter, 1980), and strategic groups have been found to differ in performance (Ketchen et al., 1997). If strategic groups exist among firms that franchise and these groups differ in performance, examining all franchising firms as a set cannot capture the true picture of the franchising–performance relationship. The purpose of this study is to develop knowledge about the performance implications, if any, of expansion through franchising. We first examine the leading theoretical explanations for franchising as a basis for predicting the presence of strategic groups. We then identify the strategic groups present among 65 restaurant chains and test for performance differences among these groups.

Using a strategic group approach, this study identifies important links among the antecedents to franchising, its use, and performance outcomes. Managers need to recognize that whereas there are several possible motivations for adopting franchising, not all of these motivations coalign with strong performance. Specifically, managers are encouraged to view with caution franchising as a response to resource scarcity.