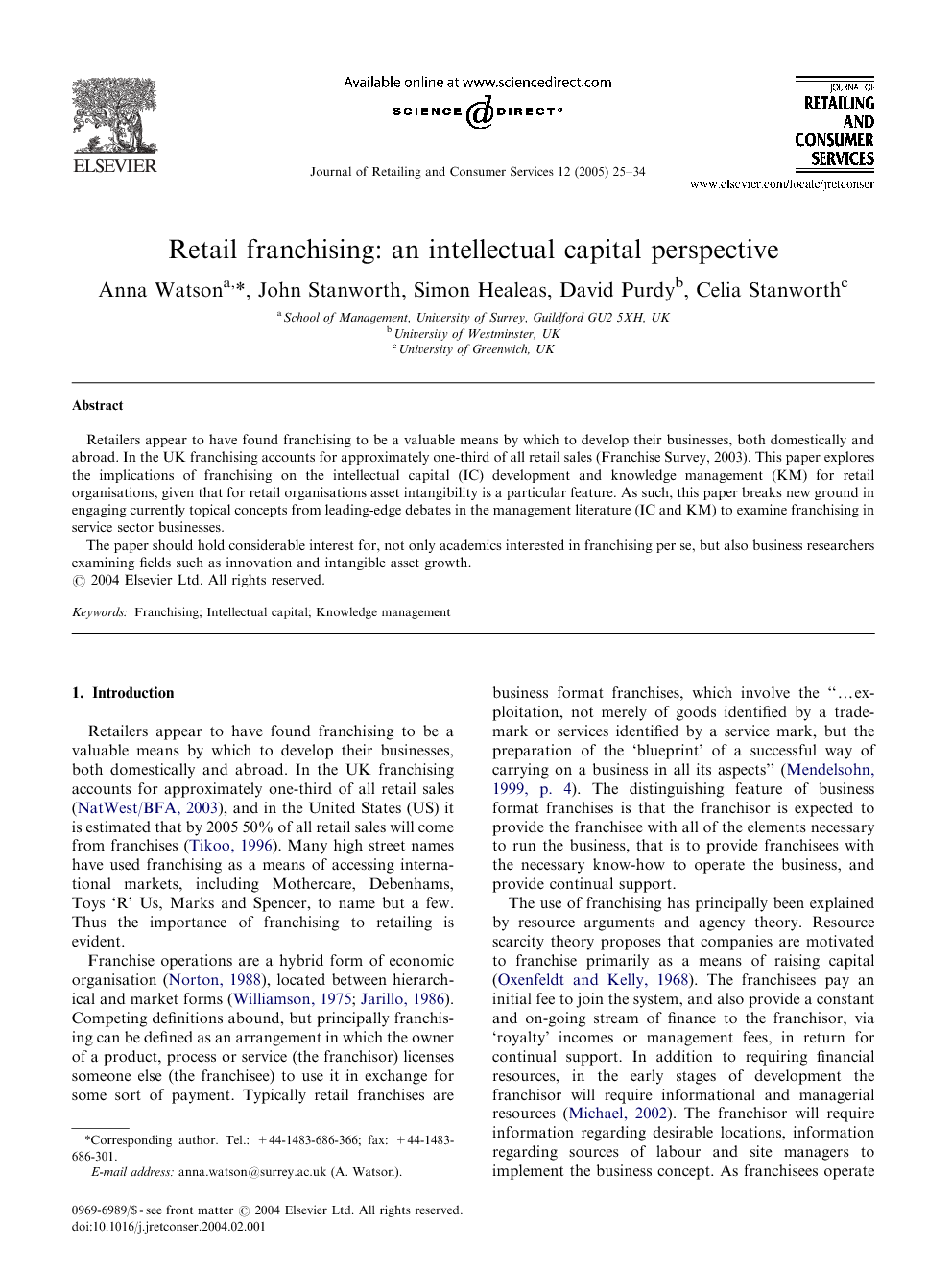 Retailers appear to have found franchising to be a valuable means by which to develop their businesses, both domestically and abroad. In the UK franchising accounts for approximately one-third of all retail sales (Franchise Survey, 2003). This paper explores the implications of franchising on the intellectual capital (IC) development and knowledge management (KM) for retail organisations, given that for retail organisations asset intangibility is a particular feature. As such, this paper breaks new ground in engaging currently topical concepts from leading-edge debates in the management literature (IC and KM) to examine franchising in service sector businesses. The paper should hold considerable interest for, not only academics interested in franchising per se, but also business researchers examining fields such as innovation and intangible asset growth.

Retailers appear to have found franchising to be a valuable means by which to develop their businesses, both domestically and abroad. In the UK franchising accounts for approximately one-third of all retail sales (NatWest/BFA, 2003), and in the United States (US) it is estimated that by 2005 50% of all retail sales will come from franchises (Tikoo, 1996). Many high street names have used franchising as a means of accessing international markets, including Mothercare, Debenhams, Toys ‘R’ Us, Marks and Spencer, to name but a few. Thus the importance of franchising to retailing is evident. Franchise operations are a hybrid form of economic organisation (Norton, 1988), located between hierarchical and market forms (Williamson, 1975; Jarillo, 1986). Competing definitions abound, but principally franchising can be defined as an arrangement in which the owner of a product, process or service (the franchisor) licenses someone else (the franchisee) to use it in exchange for some sort of payment. Typically retail franchises are business format franchises, which involve the “…exploitation, not merely of goods identified by a trademark or services identified by a service mark, but the preparation of the ‘blueprint’ of a successful way of carrying on a business in all its aspects” (Mendelsohn, 1999, p. 4). The distinguishing feature of business format franchises is that the franchisor is expected to provide the franchisee with all of the elements necessary to run the business, that is to provide franchisees with the necessary know-how to operate the business, and provide continual support. The use of franchising has principally been explained by resource arguments and agency theory. Resource scarcity theory proposes that companies are motivated to franchise primarily as a means of raising capital (Oxenfeldt and Kelly, 1968). The franchisees pay an initial fee to join the system, and also provide a constant and on-going stream of finance to the franchisor, via ‘royalty’ incomes or management fees, in return for continual support. In addition to requiring financial resources, in the early stages of development the franchisor will require informational and managerial resources (Michael, 2002). The franchisor will require information regarding desirable locations, information regarding sources of labour and site managers to implement the business concept. As franchisees operate typically in markets and communities of which they are themselves members and have considerable local knowledge, they can provide such information. Thus, franchisees bring to the franchise system not just financial capital, but also a knowledge of geographic locations and labour markets, and their own managerial labour; that is they represent an efficient bundled source of financial, managerial and information capital (Dant and Kaufmann, 2003). This resource scarcity view would suggest that in the long-term franchised chains will revert to company owned networks (Oxenfeldt and Kelly, 1968) and has prompted a number of studies who have attempted to test this proposition (see Dant et al. (1996) for an analysis of the literature). Agency theory suggests that by making franchisees residual claimants, franchising provides incentives to reduce opportunistic behaviour (Mathewson and Winter, 1985; Brickley and Dark, 1987; Norton, 1988; Sen, 1993). The franchisee owns the right to operate the franchisor's business system in a particular area, and keeps the residual claims after paying a royalty (management fee), usually a percentage of sales. These ownership rights should induce the franchisee to extend greater effort in supervision and other cost reducing and demand generating activities (Michael, 2002). Thus, by making franchisees residual claimants, a franchisee has a greater incentive to supervise operations than an employee (Michael, 2002). For retailers, this is particularly pertinent, as where an agent's effort is an important determinant of sales, the benefits of franchising may be greater (Lafontaine and Slade, 1997). These agency issues may help explain the presence of large, well-established franchised networks. The literature on franchising has tended to focus on the motivations for franchising, as summarised above, and considered the relative failure rates of franchises compared with small businesses. There has been little research to date, however, which has considered the impact of franchising on business performance, although researchers such as Cliquet and Perrigot (2003) have begun to examine such issues. Equally the critical factors for a successful franchise network are under explored, although there is a growing literature on the area of franchisor/franchisee relationships (see for example, Baucus et al., 1996; Kaufmann and Eroglu, 1999, Dant and Nasr, 1998). It is believed that an intellectual capital framework may provide a useful mechanism by which to develop an understanding of such issues. The aim of this paper therefore, is to explore the implications of the intellectual capital framework for retail franchises, and puts forward a series of propositions for future research. Service sector businesses, by their very nature, have relatively few assets that are tangible, and therefore much of their success relates to the ability to effectively manage and maximise the value of their intangible assets. Intellectual capital (IC) refers to the intangible assets, that is, the knowledge resources, information, experiences, skills, structures, culture and relationships of a company which collectively can create wealth (Wexler, 2002). Given the dependence of service sector businesses on their intangible assets, it is believed that the IC framework thus provides a useful mechanism by which to consider retail franchises. The paper is structured as follows. Firstly, the intellectual capital framework is explained. An examination then follows, drawing on this framework, of the impact of franchising on retail organisations. The paper concludes by reviewing the findings, and suggesting areas for further research.