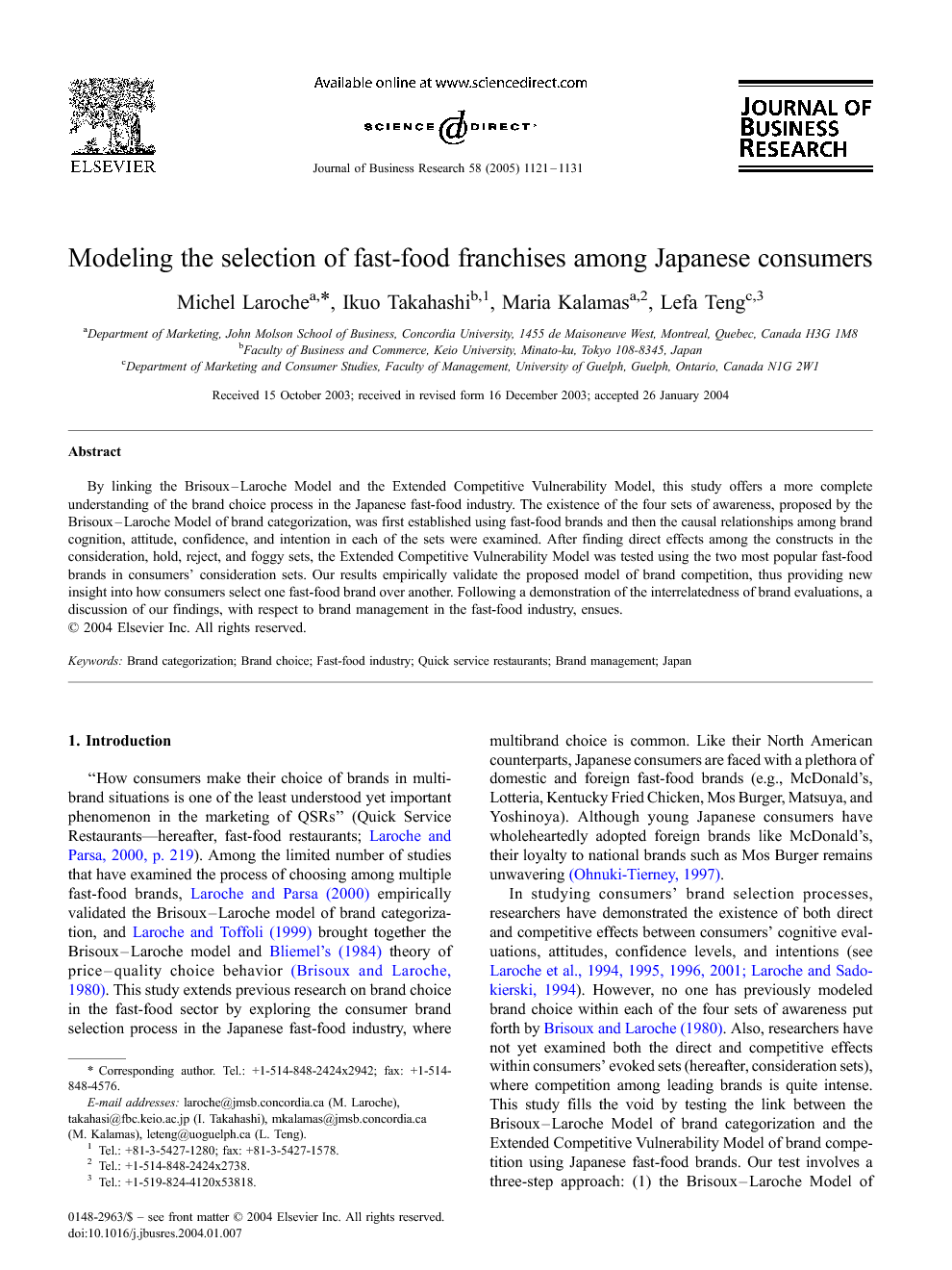 By linking the Brisoux–Laroche Model and the Extended Competitive Vulnerability Model, this study offers a more complete understanding of the brand choice process in the Japanese fast-food industry. The existence of the four sets of awareness, proposed by the Brisoux–Laroche Model of brand categorization, was first established using fast-food brands and then the causal relationships among brand cognition, attitude, confidence, and intention in each of the sets were examined. After finding direct effects among the constructs in the consideration, hold, reject, and foggy sets, the Extended Competitive Vulnerability Model was tested using the two most popular fast-food brands in consumers' consideration sets. Our results empirically validate the proposed model of brand competition, thus providing new insight into how consumers select one fast-food brand over another. Following a demonstration of the interrelatedness of brand evaluations, a discussion of our findings, with respect to brand management in the fast-food industry, ensues.

“How consumers make their choice of brands in multibrand situations is one of the least understood yet important phenomenon in the marketing of QSRs” (Quick Service Restaurants—hereafter, fast-food restaurants; Laroche and Parsa, 2000, p. 219). Among the limited number of studies that have examined the process of choosing among multiple fast-food brands, Laroche and Parsa (2000) empirically validated the Brisoux–Laroche model of brand categorization, and Laroche and Toffoli (1999) brought together the Brisoux–Laroche model and Bliemel's (1984) theory of price–quality choice behavior (Brisoux and Laroche, 1980). This study extends previous research on brand choice in the fast-food sector by exploring the consumer brand selection process in the Japanese fast-food industry, where multibrand choice is common. Like their North American counterparts, Japanese consumers are faced with a plethora of domestic and foreign fast-food brands (e.g., McDonald's, Lotteria, Kentucky Fried Chicken, Mos Burger, Matsuya, and Yoshinoya). Although young Japanese consumers have wholeheartedly adopted foreign brands like McDonald's, their loyalty to national brands such as Mos Burger remains unwavering (Ohnuki-Tierney, 1997). In studying consumers' brand selection processes, researchers have demonstrated the existence of both direct and competitive effects between consumers' cognitive evaluations, attitudes, confidence levels, and intentions (see Laroche et al., 1994, Laroche et al., 1995, Laroche et al., 1996, Laroche et al., 2001 and Laroche and Sadokierski, 1994). However, no one has previously modeled brand choice within each of the four sets of awareness put forth by Brisoux and Laroche (1980). Also, researchers have not yet examined both the direct and competitive effects within consumers' evoked sets (hereafter, consideration sets), where competition among leading brands is quite intense. This study fills the void by testing the link between the Brisoux–Laroche Model of brand categorization and the Extended Competitive Vulnerability Model of brand competition using Japanese fast-food brands. Our test involves a three-step approach: (1) the Brisoux–Laroche Model of brand categorization is validated, (2) the relationships among brand cognition, attitude, confidence, and intention in each of the four sets of awareness are examined, and (3) the Extended Competitive Vulnerability Model is tested using the two most popular brands in consumers' consideration sets. Based on the findings, useful marketing strategies that allow managers to differentiate their brand from the nearest competitors, especially in consumers' consideration sets, are suggested.

This research examined consumers' brand categorization processes and provided insight into how consumers arrive at the decision to choose one brand. A test of the Brisoux–Laroche Model with 12 fast-food brands revealed that consumers categorize available brands into four awareness sets. Findings thus empirically validated the Brisoux–Laroche brand categorization model in a Japanese context and supported prior findings Laroche and Parsa, 2000 and Laroche and Toffoli, 1999. Unlike previous studies, structural equation modeling was used to delve deeper into the brand choice process that takes place in each of the four awareness sets. Findings showed that consumers' cognitive evaluations impact both their attitudes toward and confidence levels in a brand, and their intent to purchase that brand. These results were consistent across the consideration, hold, reject, and foggy sets, indicating that consumers rely on a systematic information processing approach in multibrand situations. Our attempt to link the Brisoux–Laroche Model and the Extended Competitive Vulnerability Model was successful. Overall, most parameters were significant and all the structural relationships were in the hypothesized direction (Table 5). These findings strongly support the notion of a positive relationship between a consumer's cognitive evaluation of a focal brand and her/his attitude and intention toward the same brand, and a negative relationship between a consumer's cognitive evaluation of a specific brand and her/his attitude and intention toward competing brands. The influence of competing brands on intention to purchase a focal brand is consistent with previous findings in that an individual's intention to buy a focal brand is negatively affected by her/his global attitudes toward and confidence in other competing brands, and positively affected by her/his attitude toward and confidence in the same brand. By empirically validating the Extended Competitive Vulnerability Model, the findings support the idea that competition among brands is multifaceted. In other words, brands compete against each other at every stage of the decision-making process. For managers, constantly monitoring what competitors are doing is of prime importance because increasing or decreasing evaluations of competing brands may shift overall preference orders (Abe and Tanaka, 1989). As empirically demonstrated, the Brisoux–Laroche brand categorization model allows managers to better understand how consumers sort brands. Not surprisingly, every manager's goal is to move her/his brand out of the other three sets and into consumers' consideration sets. Although this study did not address what causes a brand to move between and within awareness sets, the findings show that brands in each awareness set are heterogeneous. Managers should thus differentiate their brand from the nearest competitors by spreading brand-specific information. For example, previous research has established that information relating to price and quality has a bearing on consumers' evaluations of fast-food brands (Laroche and Toffoli, 1999). The difference in net utility between high- and low-end brands is such that it prevents the latter from being selected. Other factors (e.g., cleanliness, variety, and location) which have not yet been probed (for a complete list, see Knutson, 2000), may also deter consumers from placing brands in their consideration sets. Even within consumers' consideration sets, competition among brands is formidable. In the Japanese fast-food sector, for example, McDonald's and Mos Burger were found to be the main competitors (i.e., the top two brands in consumer's consideration sets). With a worldwide reputation and more than double the number of outlets as its nearest rival (i.e., Mos Burger), it is of no surprise that McDonald's is the market leader in Japan. McDonald's enjoys a competitive advantage over other domestic and foreign brands by using its resources to influence the brand categorization and choice process in its favor. To successfully compete, Mos Burger and other close rivals should inform customers about their brand management strategies (e.g., brand extensions) and adopt niche marketing Kotler, 1994 and Laroche and Parsa, 2000. This is especially important in the Japanese fast-food industry, which is in the early maturity stage of the life cycle. In the United States, where the industry is fully in the mature stage, brand management is even more important (Laroche and Parsa, 2000). Smaller companies like Chick-fil-A use billboards and taste tests to lure customers, and to keep the company from drowning under the advertising weight of large national brands (Berry, 1999). By emphasizing its distinct brand personality, this U.S.-based company is able to ensure a position in consumers' consideration sets.