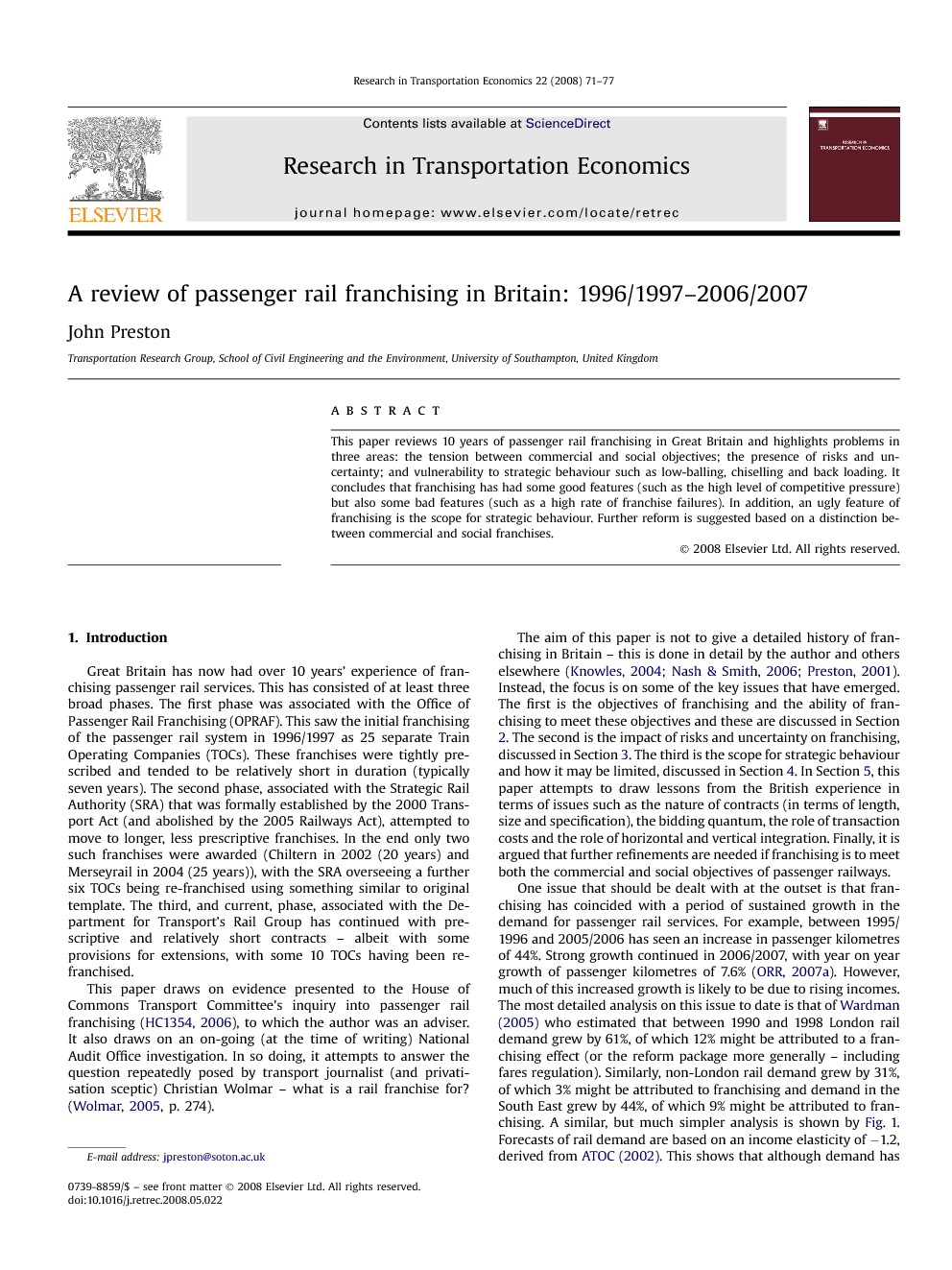 This paper reviews 10 years of passenger rail franchising in Great Britain and highlights problems in three areas: the tension between commercial and social objectives; the presence of risks and uncertainty; and vulnerability to strategic behaviour such as low-balling, chiselling and back loading. It concludes that franchising has had some good features (such as the high level of competitive pressure) but also some bad features (such as a high rate of franchise failures). In addition, an ugly feature of franchising is the scope for strategic behaviour. Further reform is suggested based on a distinction between commercial and social franchises.

Great Britain has now had over 10 years' experience of franchising passenger rail services. This has consisted of at least three broad phases. The first phase was associated with the Office of Passenger Rail Franchising (OPRAF). This saw the initial franchising of the passenger rail system in 1996/1997 as 25 separate Train Operating Companies (TOCs). These franchises were tightly prescribed and tended to be relatively short in duration (typically seven years). The second phase, associated with the Strategic Rail Authority (SRA) that was formally established by the 2000 Transport Act (and abolished by the 2005 Railways Act), attempted to move to longer, less prescriptive franchises. In the end only two such franchises were awarded (Chiltern in 2002 (20 years) and Merseyrail in 2004 (25 years)), with the SRA overseeing a further six TOCs being re-franchised using something similar to original template. The third, and current, phase, associated with the Department for Transport's Rail Group has continued with prescriptive and relatively short contracts – albeit with some provisions for extensions, with some 10 TOCs having been re-franchised. This paper draws on evidence presented to the House of Commons Transport Committee's inquiry into passenger rail franchising (HC1354, 2006), to which the author was an adviser. It also draws on an on-going (at the time of writing) National Audit Office investigation. In so doing, it attempts to answer the question repeatedly posed by transport journalist (and privatisation sceptic) Christian Wolmar – what is a rail franchise for? (Wolmar, 2005, p. 274). The aim of this paper is not to give a detailed history of franchising in Britain – this is done in detail by the author and others elsewhere (Knowles, 2004, Nash and Smith, 2006 and Preston, 2001). Instead, the focus is on some of the key issues that have emerged. The first is the objectives of franchising and the ability of franchising to meet these objectives and these are discussed in Section 2. The second is the impact of risks and uncertainty on franchising, discussed in Section 3. The third is the scope for strategic behaviour and how it may be limited, discussed in Section 4. In Section 5, this paper attempts to draw lessons from the British experience in terms of issues such as the nature of contracts (in terms of length, size and specification), the bidding quantum, the role of transaction costs and the role of horizontal and vertical integration. Finally, it is argued that further refinements are needed if franchising is to meet both the commercial and social objectives of passenger railways. One issue that should be dealt with at the outset is that franchising has coincided with a period of sustained growth in the demand for passenger rail services. For example, between 1995/1996 and 2005/2006 has seen an increase in passenger kilometres of 44%. Strong growth continued in 2006/2007, with year on year growth of passenger kilometres of 7.6% (ORR, 2007a). However, much of this increased growth is likely to be due to rising incomes. The most detailed analysis on this issue to date is that of Wardman (2005) who estimated that between 1990 and 1998 London rail demand grew by 61%, of which 12% might be attributed to a franchising effect (or the reform package more generally – including fares regulation). Similarly, non-London rail demand grew by 31%, of which 3% might be attributed to franchising and demand in the South East grew by 44%, of which 9% might be attributed to franchising. A similar, but much simpler analysis is shown by Fig. 1. Forecasts of rail demand are based on an income elasticity of −1.2, derived from ATOC (2002). This shows that although demand has grown broadly in line with income based forecasts for much of the period a divergence emerged in the early 1990s which has not been eradicated. Of the 44% growth in passenger kilometres between 1995/1996 and 2005/2006, 37% could be attributed to rising incomes and only 7% (at most) to franchising.Franchising has led to some service innovations and product development, particularly with respect to ticketing. Initial examples included the development of telephone call centres (see Van de Velde, Mizutani, Preston, & Hulten, 1998), whilst more recent examples include the distribution of tickets by the web and mobile telephony and the provision of WiFi services (Preston & Wall, 2007). This in turn may be expected to have led to some modest market growth (as improved revenue protection) but innovation is not the dominant feature of franchising. The Transport Committee observed that there was ‘very little room for innovation and development’, either at the bidding stage or after the franchise had been awarded.

There are at least five desirable features for activities for which contracting-out is being considered (Mackie & Preston, 1996). First, service requirements should be easy to define and reasonably stable. Secondly, the technology should be well understood. Thirdly, sunk costs should not be too high. Fourthly, the initial costs of defining and letting the contract should be low. Fifthly, monitoring of service delivery and quality should be feasible. Arguably these features only partially apply to the passenger railway industry and as a result franchising has had mixed results which might be categorised as being the good, the bad and the ugly. The good is that rail franchising in Britain has been competitive and that it has permitted reductions in revenue support to something approaching the pre-privatisation levels. The bad is that risks and uncertainties have distorted the process, resulting in relatively little transfer of risk from Government to the private sector and limited innovation. The ugly is that there remains scope for strategic behaviour by operators, which may be exacerbated by incentives (such as the cap and collar regime) and regulations (such as those relating to moderation of competition and fares). Given this, further refinements over and above those suggested by the Transport Committee are probably required. These might be based on the distinction between largely commercial long distance service and more socially minded local services. The former might be based on relatively loosely specified, long length franchises, awarded on a net cost basis. The latter might be based on tightly specified, short-term franchises awarded on a gross cost basis. Here the contracting-out of franchise design might even be considered – an unrequited theme of past Thredbo conferences (Preston, 2007).