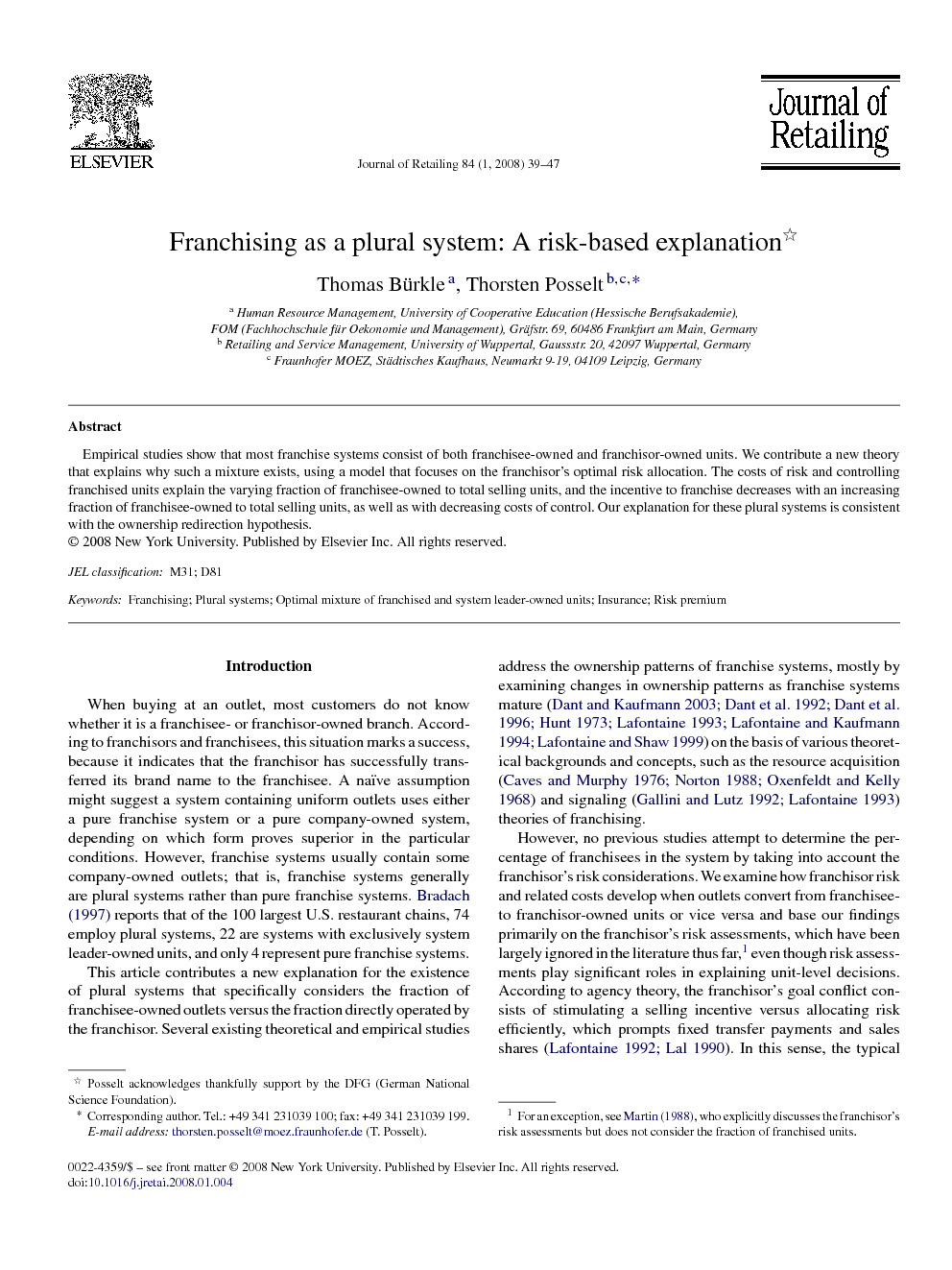 Empirical studies show that most franchise systems consist of both franchisee-owned and franchisor-owned units. We contribute a new theory that explains why such a mixture exists, using a model that focuses on the franchisor's optimal risk allocation. The costs of risk and controlling franchised units explain the varying fraction of franchisee-owned to total selling units, and the incentive to franchise decreases with an increasing fraction of franchisee-owned to total selling units, as well as with decreasing costs of control. Our explanation for these plural systems is consistent with the ownership redirection hypothesis.

Several existing studies attempt to explain the existence of plural systems, but none explicates the proportion of franchisee-owned units to total units. Our model offers an approach based on considerations of risk and control costs and can effectively explain the proportion of franchisee-owned outlets in a system. Although control costs are not uncommon topics in existing literature, they have never been applied to franchising in the way we suggest, namely, as a mechanism to reduce the franchisor's risk. Rather, previous research tends to concentrate on the risk costs the franchisee incurs. Although franchising increases the risk costs for the franchisee (compared with a branch manager), the franchisor's saving of risk costs with each franchisee-owned unit (compared with a franchisor-owned unit) may even be larger. As we show, an increasing fraction of franchisee-owned units creates an increasingly weaker incentive to transfer further units to franchisees, because the savings in (marginal) risk costs constantly decline. However, the optimal fraction of franchisee-owned units remains below the level determined by the franchisor's risk costs and control costs, because the marginal revenue derived from substituting the expected income of a franchisor-owned unit for the fixed fees paid by a franchisee is negative. How can we evaluate the model results against the backdrop of ownership redirection? As we noted, the hypothesis of ownership redirection states that past a certain growth point, franchisors take over the units. If we assume that small franchise systems generally are at the beginning of their organizational life cycle, the franchisor lacks sufficient resources and is poorly diversified and therefore strongly risk averse. Initially outsourcing outlets through franchising provides particularly high savings in terms of risk costs for the franchisor, and for such early-stage systems, the discussed effects will have commensurately greater significance. Consequently, we anticipate a correspondingly high percentage of franchising. Larger systems, in contrast, presumably have reached an advanced stage of their life cycle, which has enabled the franchisor to accumulate greater assets and achieve a better position from which to diversify. Therefore, franchisors of larger, more successful systems tend to be less risk averse, and the risk costs have lesser significance to them. Efforts to save risk costs become commensurately low through the increasing fraction of franchisee-owned units, and therefore, we expect a higher proportion of franchisor-owned units. Our model thus provides theoretical substantiation of the ownership redirection hypothesis, which has gained support in empirical studies (Dant and Kaufmann 2003). However, we also acknowledge several limitations to our theory. First, we base our model on an exponential utility function. Second, we assume that each outlet faces the same environmental uncertainty. Third, we assume that the fixed fee paid by the franchisee remains constant, even though we could argue that the fixed fee is endogenous and changes with the risk parameters in the model or may relate to increasing market risk. Although franchisees may not know the environmental risk of a particular outlet, they likely would demand different fixed fees if they did know that specific risk. Fourth, our model neglects the effect of contract length on the franchisees’ incentives; they may behave more opportunistically near the end of their contract if they do not want to extend it. Further research should address these problems and thereby provide further insights.