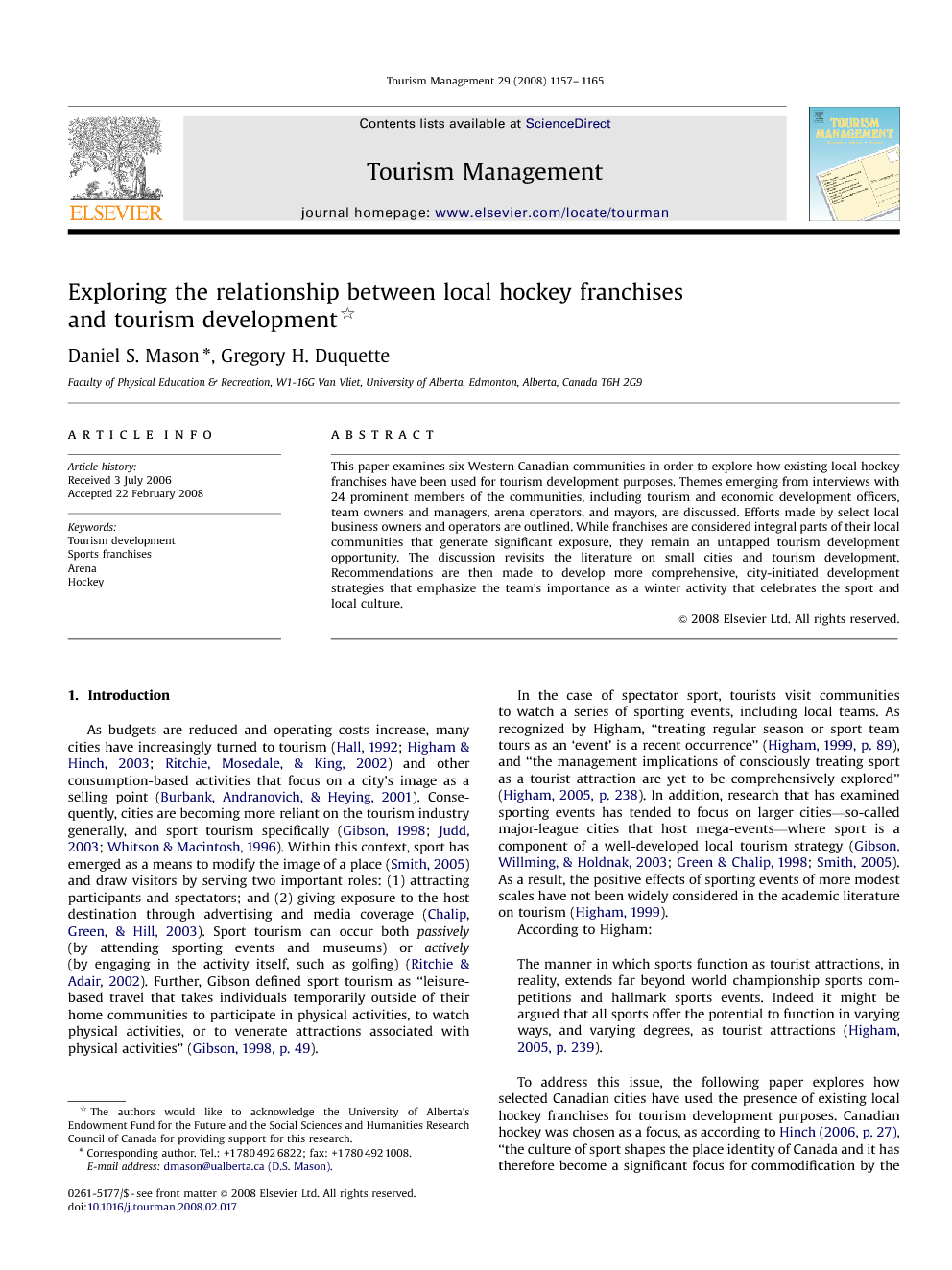 This paper examines six Western Canadian communities in order to explore how existing local hockey franchises have been used for tourism development purposes. Themes emerging from interviews with 24 prominent members of the communities, including tourism and economic development officers, team owners and managers, arena operators, and mayors, are discussed. Efforts made by select local business owners and operators are outlined. While franchises are considered integral parts of their local communities that generate significant exposure, they remain an untapped tourism development opportunity. The discussion revisits the literature on small cities and tourism development. Recommendations are then made to develop more comprehensive, city-initiated development strategies that emphasize the team's importance as a winter activity that celebrates the sport and local culture.

As budgets are reduced and operating costs increase, many cities have increasingly turned to tourism (Hall, 1992; Higham & Hinch, 2003; Ritchie, Mosedale, & King, 2002) and other consumption-based activities that focus on a city's image as a selling point (Burbank, Andranovich, & Heying, 2001). Consequently, cities are becoming more reliant on the tourism industry generally, and sport tourism specifically (Gibson, 1998; Judd, 2003; Whitson & Macintosh, 1996). Within this context, sport has emerged as a means to modify the image of a place (Smith, 2005) and draw visitors by serving two important roles: (1) attracting participants and spectators; and (2) giving exposure to the host destination through advertising and media coverage (Chalip, Green, & Hill, 2003). Sport tourism can occur both passively (by attending sporting events and museums) or actively (by engaging in the activity itself, such as golfing) (Ritchie & Adair, 2002). Further, Gibson defined sport tourism as “leisure-based travel that takes individuals temporarily outside of their home communities to participate in physical activities, to watch physical activities, or to venerate attractions associated with physical activities” (Gibson, 1998, p. 49). In the case of spectator sport, tourists visit communities to watch a series of sporting events, including local teams. As recognized by Higham, “treating regular season or sport team tours as an ‘event’ is a recent occurrence” (Higham, 1999, p. 89), and “the management implications of consciously treating sport as a tourist attraction are yet to be comprehensively explored” (Higham, 2005, p. 238). In addition, research that has examined sporting events has tended to focus on larger cities—so-called major-league cities that host mega-events—where sport is a component of a well-developed local tourism strategy (Gibson, Willming, & Holdnak, 2003; Green & Chalip, 1998; Smith, 2005). As a result, the positive effects of sporting events of more modest scales have not been widely considered in the academic literature on tourism (Higham, 1999). According to Higham: The manner in which sports function as tourist attractions, in reality, extends far beyond world championship sports competitions and hallmark sports events. Indeed it might be argued that all sports offer the potential to function in varying ways, and varying degrees, as tourist attractions (Higham, 2005, p. 239). To address this issue, the following paper explores how selected Canadian cities have used the presence of existing local hockey franchises for tourism development purposes. Canadian hockey was chosen as a focus, as according to Hinch (2006, p. 27), “the culture of sport shapes the place identity of Canada and it has therefore become a significant focus for commodification by the tourism industry.” In addition, other research has recognized that “an opportunity exists for CHL [Canadian Hockey League] teams and their respective communities to leverage the well-established links between hockey and community for economic purposes” (Mason, Duquette, & Scherer, 2005, p. 269). As Higham further explained, “sports may be an important part of the suite of attractions at a tourist destination, although sports have rarely been conceived and managed as such” (Higham, 2005, p. 258). This may be particularly important when considering locally based sports (Hinch, 2006). Thus, the current study sought to initially examine the role—if at all—local Canadian hockey teams play in a city's broader tourism development strategy. More specifically, the study sought the insights of those involved with teams and arenas, and the operation and branding of cities, in order to determine if the presence of a team represented an opportunity for furthering tourism initiatives within the host cities. 1.1. The Canadian Hockey League The choice of hockey franchises is related to their prominence as entertainment products within their respective communities and the Canadian Hockey League (CHL)'s recent growth as a sport commodity. “In communities across Canada, attending hockey games remains a focal point for social activity, where attending a game can remain the thing to do on a cold, winter night (especially in the absence of other entertainment options)” (Mason et al., 2005, p. 264). Games are played by 16–21 year old males, and the league serves two overarching purposes: (1) to act as an entertainment product; and (2) serve as a developmental (or feeder) league for the elite professional circuit, the National Hockey League (NHL), where over 50% of NHL rosters are comprised of former CHL players. In terms of attendance, the CHL is the number one spectator sport in Canada (CHL, 2004). Teams are located in 51 Canadian communities, and represent the premier sport/entertainment attraction in the majority of these cities. In most cases, the local CHL team represents the highest-calibre sport competition, in the largest entertainment facility in the city. Several exceptions include Toronto, Calgary, Ottawa, and Vancouver—these cities also host NHL and/or Canadian Football League (CFL) franchises. In addition, hockey remains an important part of the cultural fabric of many Canadian communities (Gruneau & Whitson, 1993; Mason, 2002; Scherer & Jackson, 2004), and in some CHL teams have become prominent local institutions. As a result, the success of the local CHL team represents a source of civic pride and a vehicle for civic boosterism that is closely linked to civic identity (Duquette & Mason, 2004). For those who may be interested in engaging in a local experience, going to a game would be a desirable leisure activity, capturing the local flavor of the community. Each franchise has a distinctive history, with varying degrees of financial and competitive successes.

This paper sought to explore how local hockey franchises are used for tourism development. According to Higham (1999, p. 89) “it is important to recognize the need to attract or develop, sporting events that complement the scale, infrastructure and resorting capabilities of the host city.” The results of this study suggest that leaders in smaller cities should reconsider their junior hockey franchise—an existing resource within their communities—to brand itself as a tourist destination. To do so, successful communities must develop more formalized strategies for leveraging sport franchises as part of branding the city as a tourist destination. This will require an understanding of the broader image that the city is trying to project, and positioning the team as part of that image. In taking into account the characteristics of the city and facilitating existing business partnerships within the community, branding the community through the local hockey franchise may provide a competitive advantage for tourism development in WHL cities.