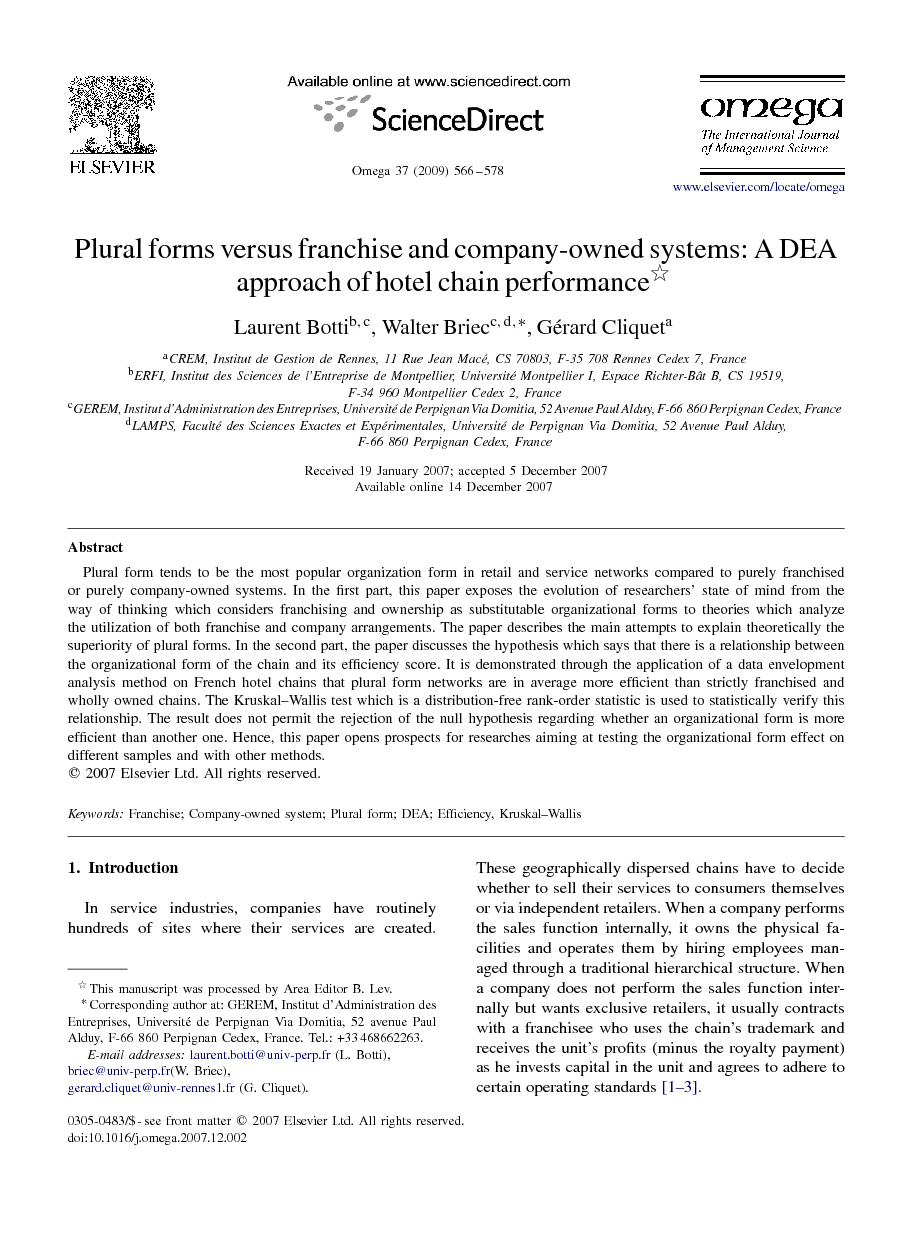 Plural form tends to be the most popular organization form in retail and service networks compared to purely franchised or purely company-owned systems. In the first part, this paper exposes the evolution of researchers’ state of mind from the way of thinking which considers franchising and ownership as substitutable organizational forms to theories which analyze the utilization of both franchise and company arrangements. The paper describes the main attempts to explain theoretically the superiority of plural forms. In the second part, the paper discusses the hypothesis which says that there is a relationship between the organizational form of the chain and its efficiency score. It is demonstrated through the application of a data envelopment analysis method on French hotel chains that plural form networks are in average more efficient than strictly franchised and wholly owned chains. The Kruskal–Wallis test which is a distribution-free rank-order statistic is used to statistically verify this relationship. The result does not permit the rejection of the null hypothesis regarding whether an organizational form is more efficient than another one. Hence, this paper opens prospects for researches aiming at testing the organizational form effect on different samples and with other methods.

In service industries, companies have routinely hundreds of sites where their services are created. These geographically dispersed chains have to decide whether to sell their services to consumers themselves or via independent retailers. When a company performs the sales function internally, it owns the physical facilities and operates them by hiring employees managed through a traditional hierarchical structure. When a company does not perform the sales function internally but wants exclusive retailers, it usually contracts with a franchisee who uses the chain's trademark and receives the unit's profits (minus the royalty payment) as he invests capital in the unit and agrees to adhere to certain operating standards [1], [2] and [3]. Then, chains are not the cookie-cutter replication of a simple business concept. Beneath a veneer of similarity reside two sharply differing organizational arrangements: company-owned units and franchised units. However, reality is different from the franchising versus company-owned system dilemma [4] and [5]. Indeed, if we consider various service industries in different countries such as fast-food in the United States [4], hotel and catering, bakeries or cosmetology in France [6] and [7], most chains are organized through a plural form, i.e. the simultaneous use of company-owned and franchised units. Some researches recently demonstrated the superiority of plural forms compared to franchised chains or company-owned arrangements. Indeed, company-owned and franchised units complement each other [5]. By having both units together, a chain can leverage some of the strengths and overcome some of the weaknesses associated with each arrangement. For instance, Sorenson and Sørensen [8] argue that chains benefit from balancing the “exploitation” provided by company-owned units with the “exploration” emanating from franchised units. In the same way, franchisors control franchisees’ incentive to underinvest in activities that foster brand name value relative to the chain by operating a large percentage of their outlets [9]. Then, it seems that there are many reasons why a mixture of company-owned and franchised units makes the chain stronger than an exclusive reliance on one or the other. However, to our knowledge, no current study has directly addressed how the decision to adopt a plural form impacts efficiency level of the chain. No study measures and compares the efficiency level of a plural form relative to the efficiency level of franchised chains and company-owned arrangements. Efficiency refers to the technological relationship between inputs and outputs. In contemporary economics, efficiency at the level of the enterprise is a major issue. Indeed, in a competing environment, a company less effective than its competitors generally does not preserve a sufficient market share to survive. Then, if the decision to adopt a plural form increases efficiency, consumers would benefit from firm market share growth and vice versa. In this context, it is interesting to study how the chain arrangement determines the company efficiency. So, our paper will discuss the hypothesis which says: There is a relationship between the organizational form of the chain and its efficiency score. To test this hypothesis, we use a data envelopment analysis (DEA) approach [10] and implement the Kruskal–Wallis test which is a distribution-free rank-order statistic [11]. We apply this method in the French hotel industry since it is an important and extremely competitive sector in France where there can be different kinds of organizational forms. Knowing which organizational form is more efficient is good news for retailers or service companies which can then make their chains survive longer than their competitors. However, the stake of this research is not only for retail or service companies. Its results should also interest manufacturers who try to market their products through these chains. The remainder of the paper is structured as follows. In the next section, the three theoretical approaches, franchising, company-owned arrangement and plural form are described. In this section, we examine why a company would choose a plural form. In Section 3, we expose the method and the empirical results. Section 4 deals with the results and finally in Section 5 we conclude.

The transformation of retail and service chains toward plural form chains is not recent if we consider a historical evolution of these chains during the last 30 years, especially in hotel industry in France [6]. But researchers have brought very little attention to that phenomenon till the 90s and have continued to deal with it in a very traditional way, i.e. by opposing franchise systems and company-owned arrangements. Then, few studies have illuminated either the complexity of plural form organizations or their management challenges. In the first part of the paper, we have exposed the evolution of researchers’ state of mind: from a mechanistic approach (rational choice of control mechanism for a given site) to a more contingent approach, i.e. from the way of thinking which considers franchising and ownership as substitutable organizational forms to theories which analyze the utilization of both arrangements in the same chain. Moreover, we have described the main theoretical attempts to explain the superiority of plural forms. While there are many theoretical reasons why plural form seems to be a rational organizational choice for chains, little empirical researches suggest anything about the productive efficiency level of this organizational form. Traditional works use quantitative data only to show the superiority of franchise units on non-franchised ones [71] and [72]. Then, in the second part of the paper, we have analyzed French hotel chains with a data envelopment analysis method and we have shown that in this case plural form networks are in average more efficient than strictly franchised and wholly owned chains. So, it seems that in the French hotel sector, there is a relationship between the organizational form of the chain and its efficiency score. To be sure about this assumption, we have implemented the Kruskal–Wallis test [11] and [68]. This test is used to examine whether one group of DEA inefficiency scores is different (more efficient) from another group. The Kruskal–Wallis test result contradicts the existence of an organizational form effect. Thus, the relationship between the organizational form of the chain and its efficiency score requires further evaluation. Future researches could test it on larger and different samples of chains or use other methods like the one employed by Grosskopf et al. [73] or the one applied by Ross and Droge [74].