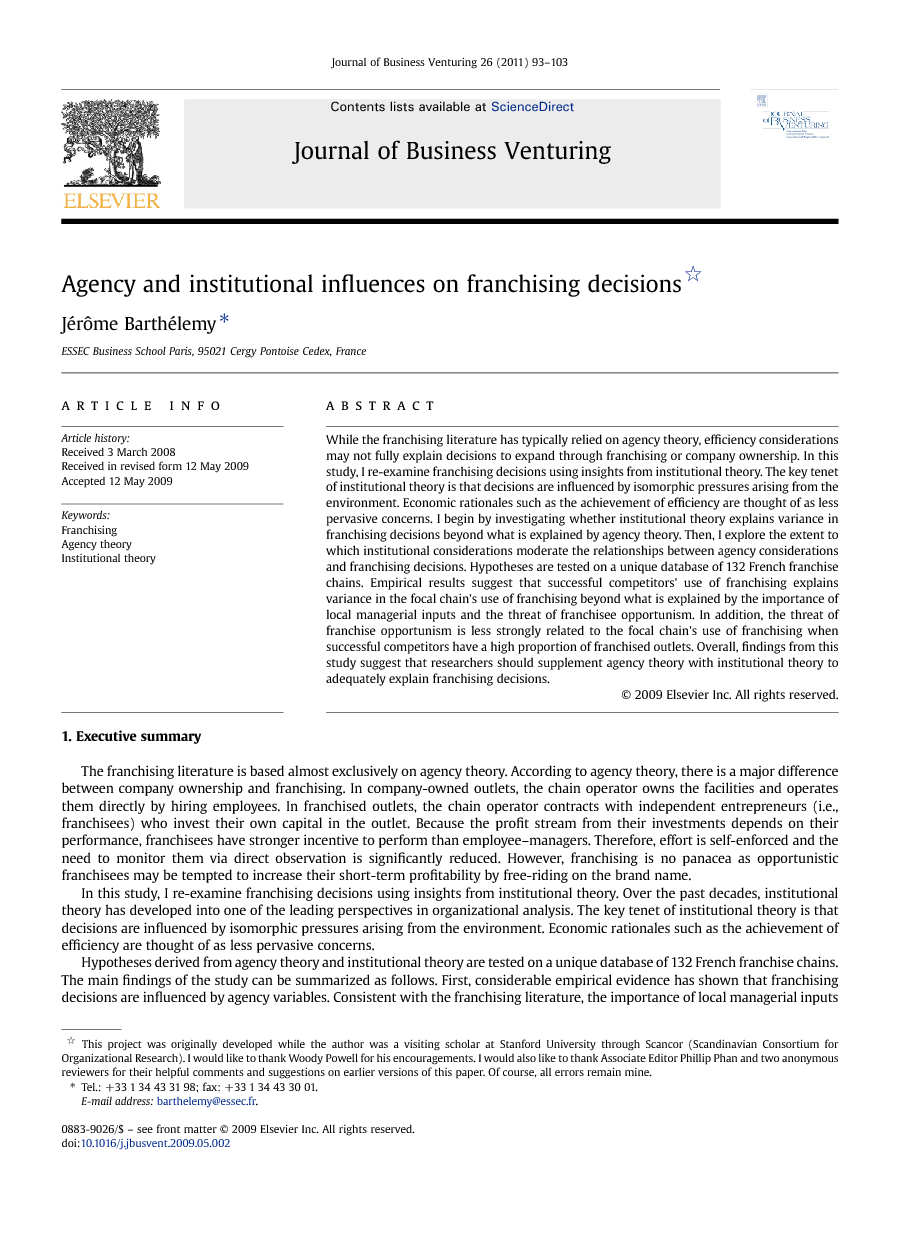 Franchising is an entrepreneurial activity that plays a crucial role in the creation of new jobs and economic development (Falbe et al., 1998). In the United States for instance, franchised businesses represent 11 million jobs and 8.1% of all private sector jobs (International Franchise Association, 2008). In franchising, a chain operator–entrepreneur collaborates with a franchisee–entrepreneur to create economic value. Specifically, the franchisee obtains from the chain operator the right to market goods or services under its brand name and to use its business practices. In return, the franchisee pays an up-front fee and ongoing royalties to the chain operator (Combs et al., 2004). An important feature of most franchise chains is that they simultaneously use franchised and company-owned outlets. As the proportion of franchised and company-owned outlets varies significantly across chains, franchising decisions have been the subject of considerable empirical research. In a recent literature review and meta-analysis of forty-four franchising studies, Combs and Ketchen (2003) found strong support for hypotheses grounded in agency theory. An agency relationship exists when one party (i.e., the principal) delegates authority to another (i.e., the agent) (Eisenhardt, 1989). A key assumption of agency theory is that the interests of agents diverge from those of principals. Therefore, agents are likely to misrepresent information regarding their skills (cf. adverse selection problem) and effort (cf. moral hazard problem) (Jensen and Meckling, 1976). According to agency theory, the adverse selection and moral hazard problems can be solved either through monitoring or residual claimancy. While monitoring aims at providing principals with information about the behavior of agents, residual claimancy aims at aligning the incentives of agents with those of principals. In the franchising context, chain operators act as principals and delegate authority to two types of agents: employee–managers and franchisees. Unlike employee–managers, franchisees are residual claimants on the profit of their outlets. They have stronger incentives to perform and the need for chain operators to monitor them via direct observation is considerably reduced (Norton, 1988 and Rubin, 1978). However, opportunistic franchisees may also be tempted to increase their short-term profitability by free-riding on the brand name (Brickley and Dark, 1987 and Carney and Gedajlovic, 1991). So far, the franchising literature has been based almost exclusively on agency theory (Combs and Ketchen, 2003 and Lafontaine and Slade, 2007). However, agency theory may not provide a full account of franchising decisions because it is “under-socialized” (Granovetter, 1985). Building upon Combs et al. (2004), I introduce an institutional perspective on franchising. Over the past decades, institutional theory has developed into one of the leading perspectives in organizational analysis (Heugens and Lander, 2009). The key tenet of institutional theory is that decisions are influenced by isomorphic pressures arising from the environment (DiMaggio and Powell, 1983, Meyer and Rowan, 1977 and Scott, 1995). Thus, the achievement of efficiency is thought of as a less pervasive concern than in agency theory. Few empirical studies have adopted an institutional perspective on franchising (for an exception, see Shane and Foo, 1999). Yet, institutional theory can make an important contribution to our understanding of franchising decisions. Specifically, a direct implication of institutional theory is that decisions to expand through franchising are likely to be influenced by the extent to which franchising has become either taken for granted, or necessary to appear legitimate to potential resource suppliers, or both. In this paper, I explore the direct and joint impact of agency and institutional considerations on franchising decisions. While both perspectives may make important explanatory contributions in their own right, neither perspective is likely to provide a fully explanatory account of franchising decisions. As pointed out above, agency theory can be criticized for providing an “under-socialized” view of organizations. Likewise, institutional theory can be reproached with providing an “over-socialized” view of organizations. By using agency theory and institutional theory into a single framework, my aim is to provide a more nuanced and complete understanding of franchising decisions. Hypotheses are tested on a unique database of 132 French business format franchise chains. Empirical results support the notion that institutional theory explains variance in franchising decisions beyond what is explained by agency theory. To some extent, institutional considerations also moderate the predictions of agency theory. Taken together, these findings suggest that researchers should supplement agency theory with institutional theory to adequately explain franchising decisions. Most prior franchising studies have explained how chain operators arrive at a particular mix of franchised or company-owned outlets. However, purely cross-sectional analyses have two limitations. First, they cannot indicate whether chain operators are moving in the direction predicted by theory. Second, they reflect past decisions, which may have been made under different conditions. In this study, I explore changes in the mix of franchised and company-owned outlets. Analyzing changes in the franchising mix is a first step toward building a more dynamic understanding of franchising decisions (Castrogiovanni et al., 2006).