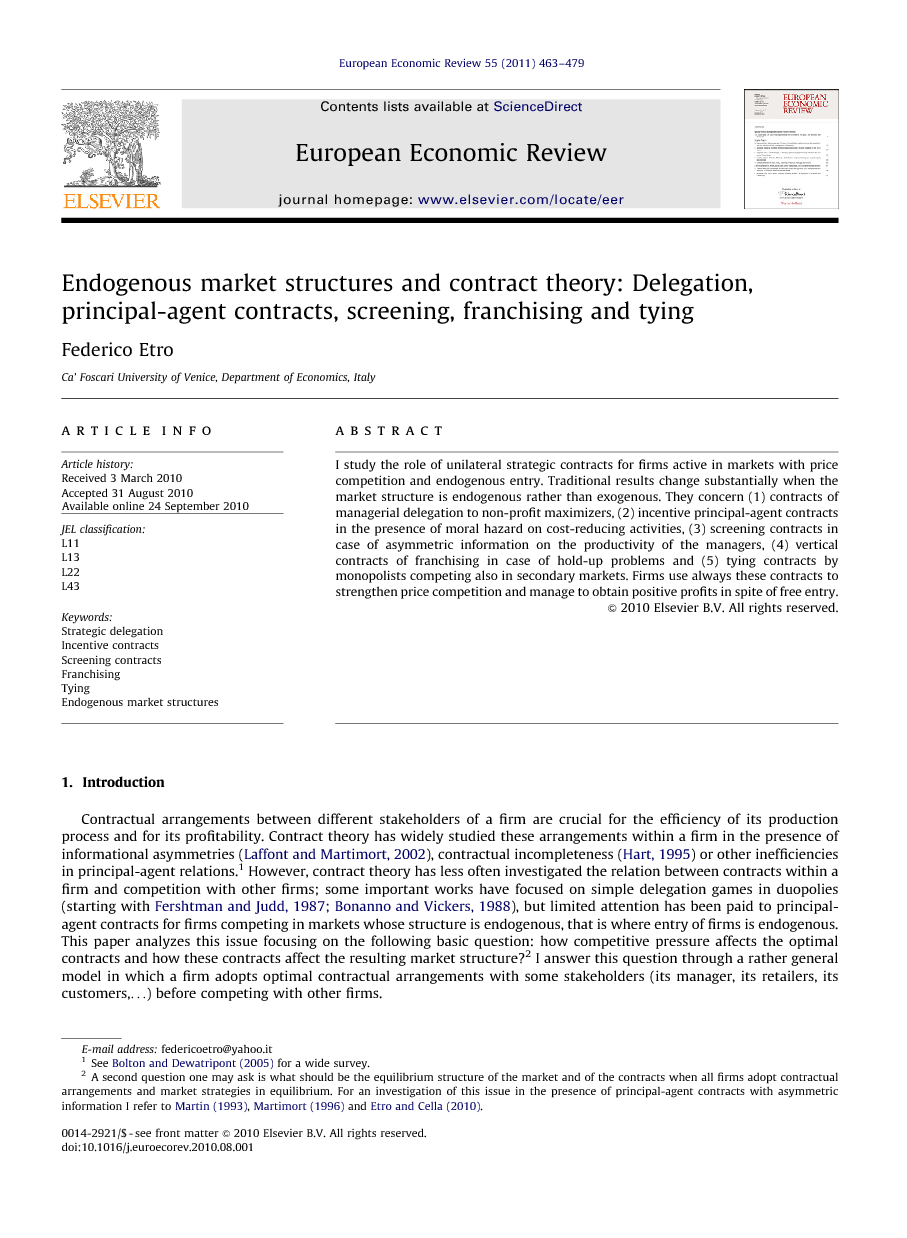 I study the role of unilateral strategic contracts for firms active in markets with price competition and endogenous entry. Traditional results change substantially when the market structure is endogenous rather than exogenous. They concern (1) contracts of managerial delegation to non-profit maximizers, (2) incentive principal-agent contracts in the presence of moral hazard on cost-reducing activities, (3) screening contracts in case of asymmetric information on the productivity of the managers, (4) vertical contracts of franchising in case of hold-up problems and (5) tying contracts by monopolists competing also in secondary markets. Firms use always these contracts to strengthen price competition and manage to obtain positive profits in spite of free entry.

In this paper we have characterized a number of optimal strategic contracts for firms active in markets with endogenous structures. Traditional results on sale incentives, managerial schemes, screening contracts, franchising, exclusive dealing and tying contracts radically change when firms compete in prices but entry in the market is endogenous. A side effect of our analysis is that the traditional ambiguity of a wide literature on strategic contracts vanishes when these are evaluated in markets with endogenous structures; in such a case, the nature of the optimal contracts does not depend on the mode of competition, but only on their impact on endogenous entry decisions. We have been dealing with contracts between the firm and its managers (incentive contracts) and between the firm and its customers (vertical contracts and tying), but other applications concern other stakeholders.33 For instance, in Etro (2010) I have looked at contracts between different shareholders to characterize the optimal debt contracts for a firm competing in a market with endogenous entry. Also in that case, traditional results change and, under competition in prices with endogenous entry and cost uncertainty, the equity holders of a firm always gain from adopting debt contracts with the purpose of committing to aggressive strategies. Further theoretical research could investigate other contractual arrangements under different contractual problems (for instance renegotiation or corruption). Finally, our results could be used to reevaluate the empirical analysis on the relation between competition and strategic contracts. We have emphasized the impact of the entry threats on the nature of the optimal contracts; one should expect the emergence of sale incentives, high-powered incentive mechanisms and bonuses for the managers of firms facing strong entry threats and less for firms without such a threat. Further research could fruitfully focus on the impact of entry pressure on contractual arrangements.