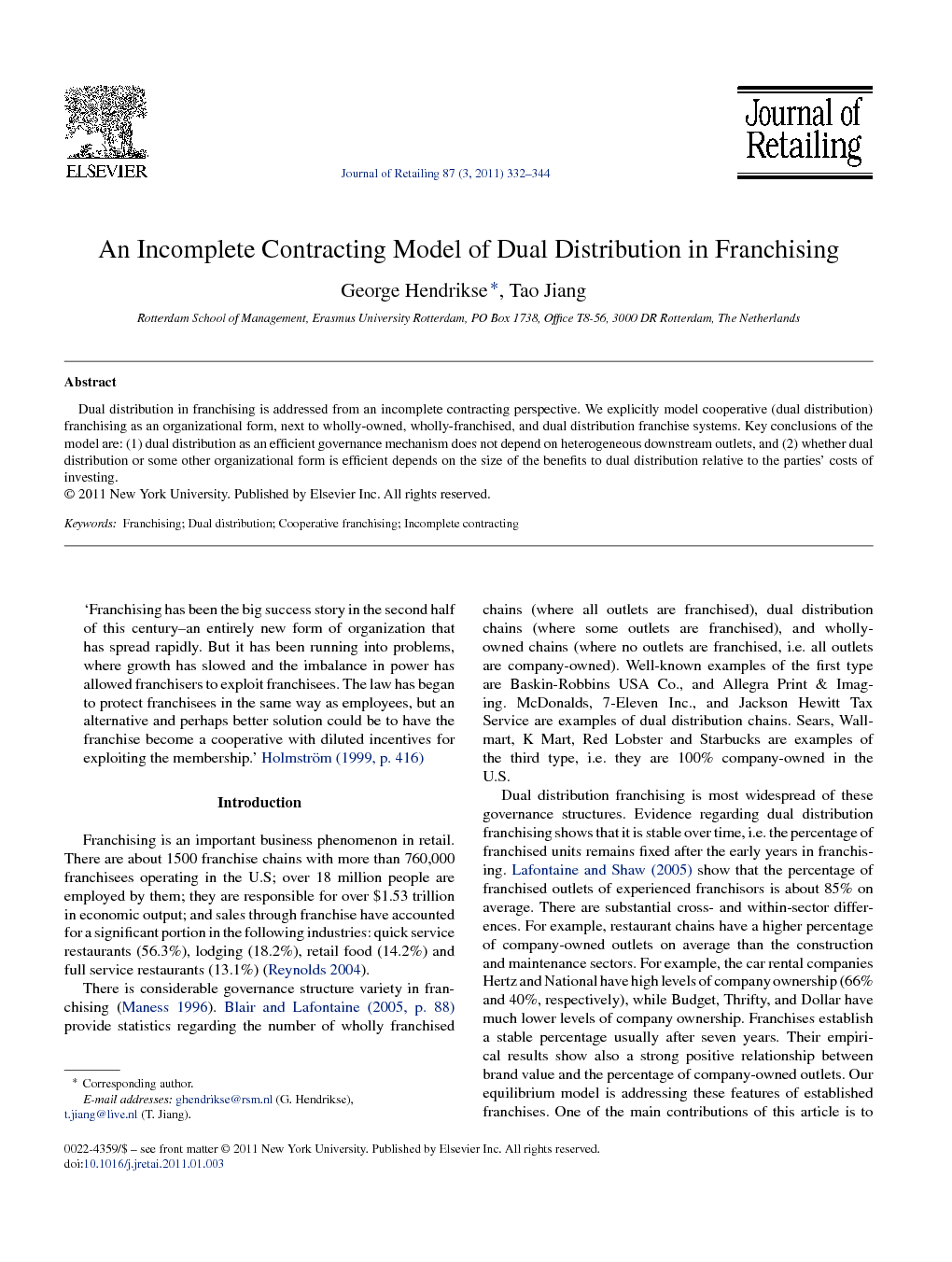 The incomplete contracting framework has been applied to identify the circumstances when dual distribution in franchising is the unique equilibrium governance structure inducing investment by the various parties exactly when it is efficient to do so. Dual distribution franchising is the sub-game perfect equilibrium governance structure when the dual distribution externalities are significant and the cost of investment is not too large for the parties involved. Cross-network differences in the extent of company ownership depend therefore on the magnitude of the dual distribution benefits and the importance of the franchisees’ ex ante investments. Dual distribution as an efficient governance structure does not depend on heterogeneous downstream outlets. Cooperative franchising (decision rights) has been presented as an alternative to changes in royalty rates (income rights) and legal protections for franchisees for achieving satisfactory levels of franchisees’ investment and motivation. Whether the dual distribution benefits are realized in a traditional franchise or a cooperative franchise depends on whether most value is added upstream or downstream. A disadvantage of dual distribution is the deterioration of the investment incentives of the party having no authority, i.e. either the company-owned outlet manager in a traditional franchise or the franchisor in a cooperative franchise. A wholly-franchised system may therefore be efficient even when unique dual distribution benefits are present. Further research may be guided by extending the model in various directions. A number of possibilities are formulated. First, actual franchise systems exhibit a substantial power asymmetry between small franchisees and the large franchisor. One way of restoring the balance of power is to erect a franchisee council (Ehrmann and Spranger 2007) and to study the optimal allocation of rights to them. Our model can be tailored to this issue in a straightforward way by modeling countervailing power as an association of various distributors. Second, the model considers only the allocation of ownership. A more general approach is to view organizations as an incentive system, considering also other instruments to align interests. Decision and income rights are treated simultaneously in the choice of governance structure (Bai and Tao, 2000, Bradach and Eccles, 1989, Holmström and Milgrom, 1994 and Windsperger and Yurdakul, 2007). For example, many franchises spend considerable effort in designing appropriate franchisee incentive schemes, including a franchise fee, royalty rates, preventing free riding by the franchisees on the brand name, and monitoring. Finally, we assume that the efficient governance structure emerges in the first stage of the game. This is a good assumption to start an analysis of governance structure choice, because a competitive market in governance structures will lead to displacing the relatively inefficient governance structures by the relatively efficient ones. However, there is often a tension between efficiency and distributional considerations due to vested interests of incumbent parties or strategic considerations in competitive settings. For example, efficiency may dictate ownership redirection, but the party loosing power will not favor this change. Efficiency may dictate a drastic change in governance structure, but these other considerations may prevent that the change occurs.