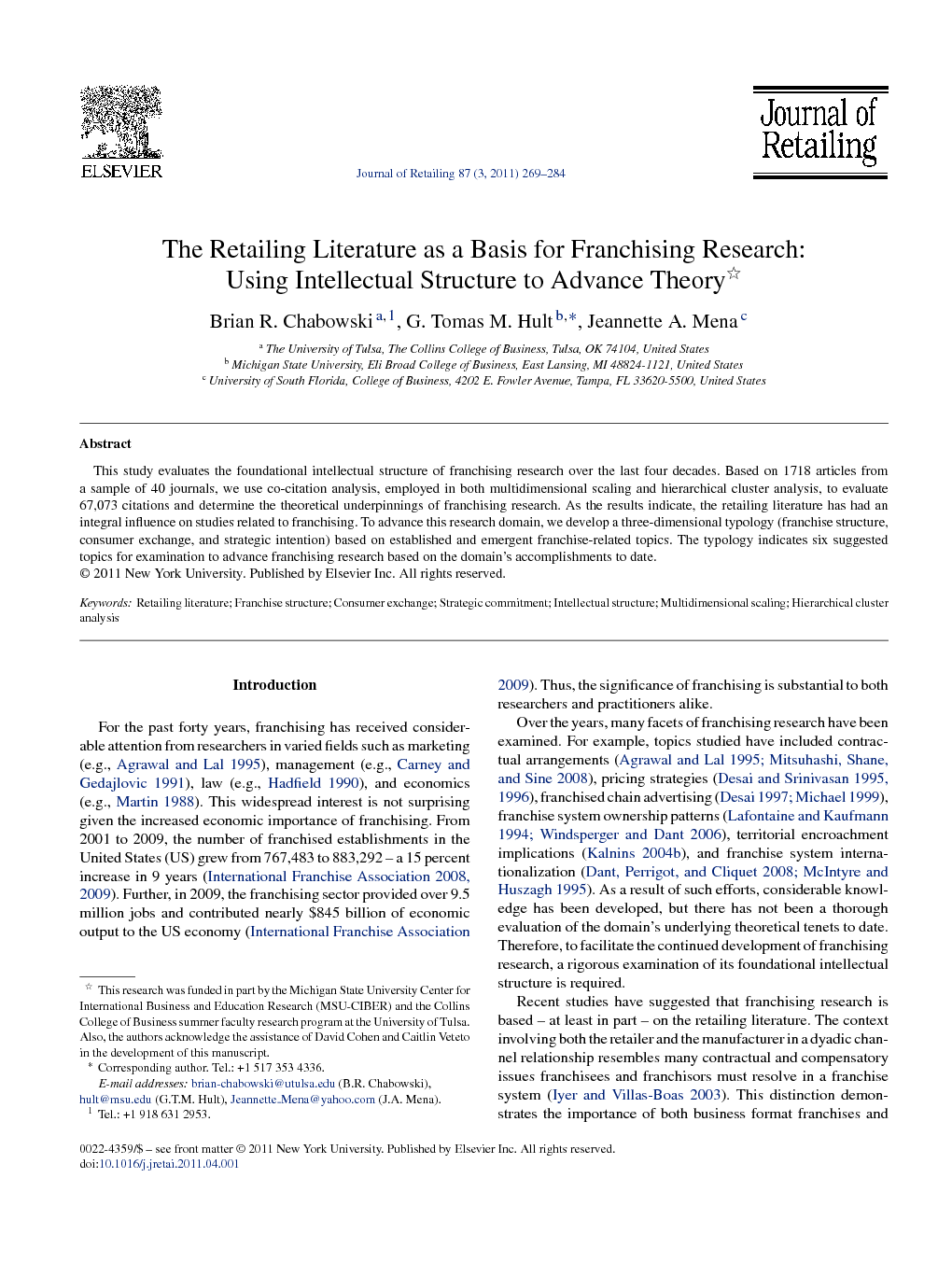 This study evaluates the foundational intellectual structure of franchising research over the last four decades. Based on 1718 articles from a sample of 40 journals, we use co-citation analysis, employed in both multidimensional scaling and hierarchical cluster analysis, to evaluate 67,073 citations and determine the theoretical underpinnings of franchising research. As the results indicate, the retailing literature has had an integral influence on studies related to franchising. To advance this research domain, we develop a three-dimensional typology (franchise structure, consumer exchange, and strategic intention) based on established and emergent franchise-related topics. The typology indicates six suggested topics for examination to advance franchising research based on the domain's accomplishments to date.

For the past forty years, franchising has received considerable attention from researchers in varied fields such as marketing (e.g., Agrawal and Lal 1995), management (e.g., Carney and Gedajlovic 1991), law (e.g., Hadfield 1990), and economics (e.g., Martin 1988). This widespread interest is not surprising given the increased economic importance of franchising. From 2001 to 2009, the number of franchised establishments in the United States (US) grew from 767,483 to 883,292 – a 15 percent increase in 9 years (International Franchise Association, 2008 and International Franchise Association, 2009). Further, in 2009, the franchising sector provided over 9.5 million jobs and contributed nearly $845 billion of economic output to the US economy (International Franchise Association 2009). Thus, the significance of franchising is substantial to both researchers and practitioners alike. Over the years, many facets of franchising research have been examined. For example, topics studied have included contractual arrangements (Agrawal and Lal, 1995 and Mitsuhashi et al., 2008), pricing strategies (Desai and Srinivasan, 1995 and Desai and Srinivasan, 1996), franchised chain advertising (Desai, 1997 and Michael, 1999), franchise system ownership patterns (Lafontaine and Kaufmann, 1994 and Windsperger and Dant, 2006), territorial encroachment implications (Kalnins 2004b), and franchise system internationalization (Dant et al., 2008 and McIntyre and Huszagh, 1995). As a result of such efforts, considerable knowledge has been developed, but there has not been a thorough evaluation of the domain's underlying theoretical tenets to date. Therefore, to facilitate the continued development of franchising research, a rigorous examination of its foundational intellectual structure is required. Recent studies have suggested that franchising research is based – at least in part – on the retailing literature. The context involving both the retailer and the manufacturer in a dyadic channel relationship resembles many contractual and compensatory issues franchisees and franchisors must resolve in a franchise system (Iyer and Villas-Boas 2003). This distinction demonstrates the importance of both business format franchises and product or trade name franchises (Combs, Ketchen, and Hoover 2004). By relating the franchising concept to the distribution of both intellectual property forms, this approach is a clear indication of the interrelated nature of franchising and retailing research. Based on this, it is expected that an intellectual structure evaluation of franchising includes influences from the retailing literature. Still, even if an assessment of the most influential works in franchising research resembles some facets of the retailing literature, this nonetheless provides a substantive premise to develop future research (Kuhn, 1996 and Yadav, 2010). Based on the bibliometric analysis of co-citation data (e.g., Acedo et al., 2006, Ramos-Rodríguez and Ruíz-Navarro, 2004 and Schildt et al., 2006), this approach enables scholars to perform research on the influential topics in franchising with an increased quantitative sophistication to supplement commonly-based qualitative reviews. Such quantitative examination allows for a better understanding of the theoretical bridges that can be built between intellectual topics. In addition, the identification of missing or understudied theoretical foundations can help advance the franchising research in ways not fully explored to date. Previous franchising and retailing research has used many techniques to synthesize its empirical and theoretical domains, identify state-of-the art research, and suggest avenues for future research (e.g., Brown and Dant, 2008, Combs et al., 2004b, Dant, 2008, Elango and Fried, 1997 and Fulop and Forward, 1997). Recent studies have expanded the domain of franchising into the entrepreneurship and social venture literatures (Kaufmann and Dant, 1999 and Tracey and Jarvis, 2007). Though this is integral for the widespread examination of franchising, an overriding imperative is to synthesize the fundamental tenets of franchising research and establish a research agenda requiring future investigation. As a significant step toward this goal, our analysis contributes to the advancement of franchising research by applying bibliometric principles to investigate the interrelationships of its most influential research topics (Dant and Brown, 2009, Garfield, 1979, McCain, 1990 and Small, 1980). The complexity and rigor of this analysis is considerable given the four decades of longitudinal data used. Specifically, this study provides three essential contributions. First, the intellectual structure of the franchising domain is established. Second, important emergent research trends are discussed to indicate the dynamism of the franchising topic. Third, a typology is advanced which integrates the established and emergent themes in franchising research and provides suggestions for the domain's future development. Aligning with the focus of this special issue, we view franchising research as examining the different aspects of franchise systems throughout their evolution. Based on this perspective, there are many factors driving a franchise system. Branding (Ailawadi and Harlam, 2004, Barthélemy, 2008 and Stern, 1967), distribution (Day and Wensley, 1983, Hunt, 1972 and Srinivasan, 2006), and contractual ownership (Caves and Murphy, 1976 and Windsperger and Dant, 2006) are among the leading topics examining this domain. We draw from these distinct perspectives to develop a framework specific to franchising for subsequent studies. Next, we discuss social network theory as our theoretical basis for the intellectual structure analyses. Then, we introduce multidimensional scaling (MDS) and hierarchical cluster analysis (HCA) as the co-citation methods used. Subsequently, the study's results are presented. Finally, a discussion section with suggested research directions is included.

This section has two parts. First, we discuss the underpinnings of franchising research by analyzing the visualized vertical and horizontal dimensions, MDS findings, and HCA results presented in the previous section. Combined, these three longitudinal assessments provide the basis for future research topics. Therefore, the second part of this section includes an overview to advance the topic of franchising in a research setting. This is accomplished by introducing the franchising-specific research typology and then relating current research to future research opportunities.