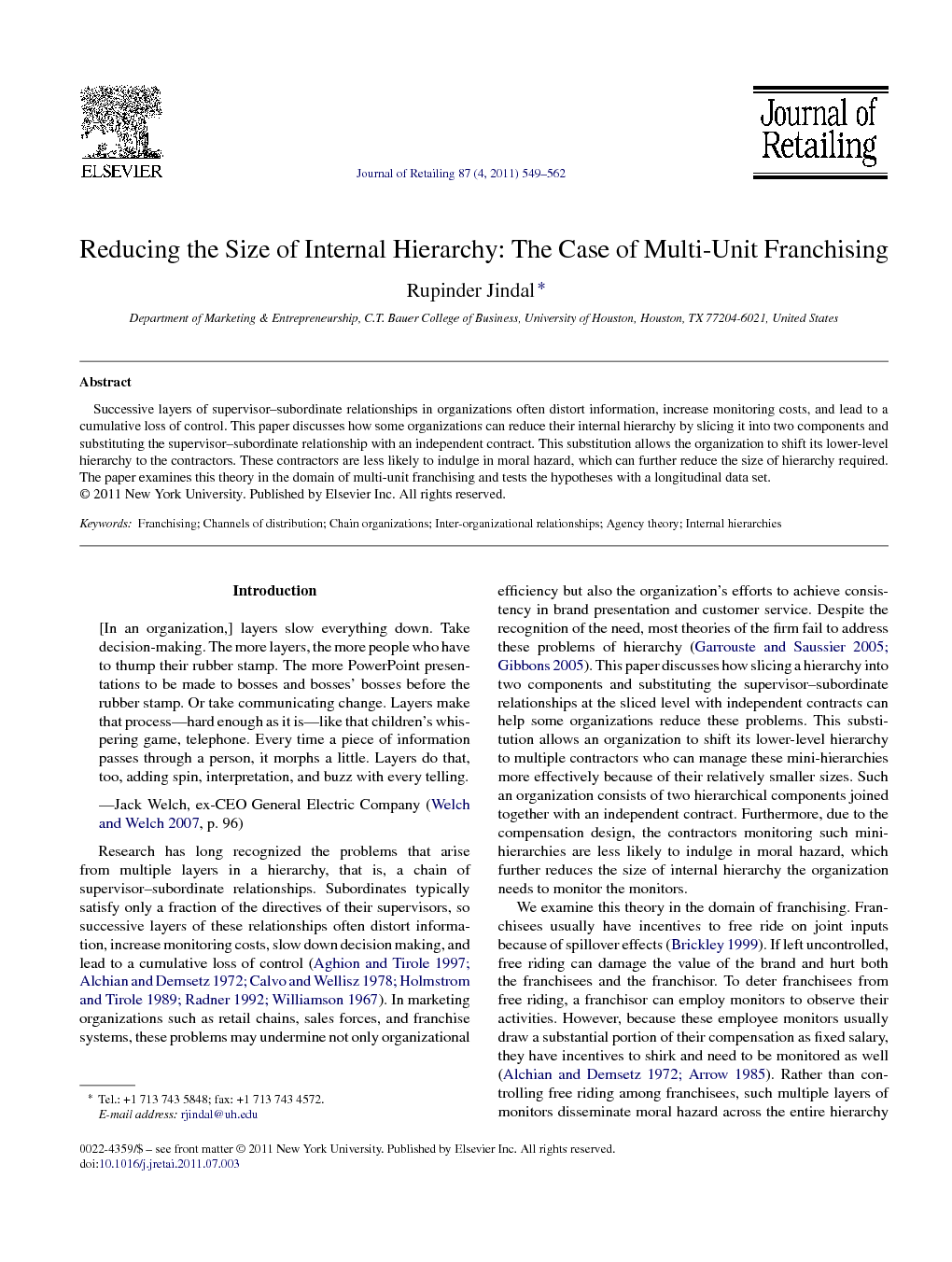 Successive layers of supervisor–subordinate relationships in organizations often distort information, increase monitoring costs, and lead to a cumulative loss of control. This paper discusses how some organizations can reduce their internal hierarchy by slicing it into two components and substituting the supervisor–subordinate relationship with an independent contract. This substitution allows the organization to shift its lower-level hierarchy to the contractors. These contractors are less likely to indulge in moral hazard, which can further reduce the size of hierarchy required. The paper examines this theory in the domain of multi-unit franchising and tests the hypotheses with a longitudinal data set.

[In an organization,] layers slow everything down. Take decision-making. The more layers, the more people who have to thump their rubber stamp. The more PowerPoint presentations to be made to bosses and bosses’ bosses before the rubber stamp. Or take communicating change. Layers make that process—hard enough as it is—like that children's whispering game, telephone. Every time a piece of information passes through a person, it morphs a little. Layers do that, too, adding spin, interpretation, and buzz with every telling. —Jack Welch, ex-CEO General Electric Company (Welch and Welch 2007, p. 96) Research has long recognized the problems that arise from multiple layers in a hierarchy, that is, a chain of supervisor–subordinate relationships. Subordinates typically satisfy only a fraction of the directives of their supervisors, so successive layers of these relationships often distort information, increase monitoring costs, slow down decision making, and lead to a cumulative loss of control (Aghion and Tirole, 1997, Alchian and Demsetz, 1972, Calvo and Wellisz, 1978, Holmstrom and Tirole, 1989, Radner, 1992 and Williamson, 1967). In marketing organizations such as retail chains, sales forces, and franchise systems, these problems may undermine not only organizational efficiency but also the organization's efforts to achieve consistency in brand presentation and customer service. Despite the recognition of the need, most theories of the firm fail to address these problems of hierarchy (Garrouste and Saussier, 2005 and Gibbons, 2005). This paper discusses how slicing a hierarchy into two components and substituting the supervisor–subordinate relationships at the sliced level with independent contracts can help some organizations reduce these problems. This substitution allows an organization to shift its lower-level hierarchy to multiple contractors who can manage these mini-hierarchies more effectively because of their relatively smaller sizes. Such an organization consists of two hierarchical components joined together with an independent contract. Furthermore, due to the compensation design, the contractors monitoring such mini-hierarchies are less likely to indulge in moral hazard, which further reduces the size of internal hierarchy the organization needs to monitor the monitors. We examine this theory in the domain of franchising. Franchisees usually have incentives to free ride on joint inputs because of spillover effects (Brickley 1999). If left uncontrolled, free riding can damage the value of the brand and hurt both the franchisees and the franchisor. To deter franchisees from free riding, a franchisor can employ monitors to observe their activities. However, because these employee monitors usually draw a substantial portion of their compensation as fixed salary, they have incentives to shirk and need to be monitored as well (Alchian and Demsetz, 1972 and Arrow, 1985). Rather than controlling free riding among franchisees, such multiple layers of monitors disseminate moral hazard across the entire hierarchy of the organization, leading to distortion of information, slower decision making, and a cumulative loss of control. Hence, franchising provides an appropriate setting to study ways to reduce the size of internal hierarchies. Using data on 3,436 observations from 713 franchisors between 1995 and 2005, we show that one way franchisors can reduce the size of their hierarchies is by adopting multi-unit franchising, that is, allocating multiple outlets to their franchisees. Specifically, we show that the franchisors are more likely to adopt multi-unit franchising when the conditions that require a large monitoring hierarchy escalate. By using multi-unit franchising a franchisor slices its monitoring hierarchy and substitutes lower-level employee monitors such as district managers with independent entities known as multi-unit franchisees. Multi-unit franchisees’ compensation depends entirely on outlet performance, which makes them more motivated monitors compared with employee-monitors. Because of their stronger motivation they need relatively less monitoring than employee-monitors, which further reduces the hierarchy the franchisor needs. This research contributes to marketing theory in two ways. First, it contributes to research in franchising by identifying four conditions—density of outlets, advertising fee, outlet size, and dispersion of markets—that influence a franchisor's decision to adopt multi-unit franchising. Although scholars have highlighted “the need to incorporate multi-unit franchising into franchise theory to answer the complexity surrounding modern franchising” (Kaufmann and Dant 1996, p. 356), this seemingly counterintuitive phenomenon remains a key question of interest (Blair and Lafontaine 2005). Second, this paper contributes to broader research in interorganizational relationships by demonstrating a governance structure that can help some organizations reduce the size of their internal hierarchies.

The results show that franchisors are more likely to adopt multi-unit franchising in response to conditions that require a large monitoring hierarchy. Four such conditions are the higher density of outlets, higher advertising fee, smaller outlet sizes, and wider geographical dispersion of markets. Density increases the severity of free riding in a franchise system—a franchisee with more neighboring franchisees has stronger incentives to free ride—which requires a franchisor to build a large monitoring hierarchy. Due to spillover effects exacerbated further by franchisees’ multiple grievances, advertising fee increases franchisees’ incentives to free ride, which requires a franchisor to build a large monitoring hierarchy. Operators of large outlets need to be provided stronger incentives to monitor larger number of employees. Franchise systems with large outlets also have reduced spillover effects due to relatively lower intra-chain competition. Thus, a franchisor with larger outlets does not need to build a large monitoring hierarchy. Geographical dispersion of markets lowers subordinates’ motivation to share information with their supervisors, which again increases the size of hierarchy a franchisor needs. Agency-based literature has looked at the relationship between free riding, monitoring, and multi-unit franchising. Scholars have primarily applied logit models to estimate the cross-sectional relationships of density and dispersion with the use of multi-unit franchising (Bercovitz, 2004 and Brickley, 1999). Kalnins and Lafontaine (2004) examined the allocation of outlets to multi-unit franchisees. We contribute to this literature by formulating multi-unit franchising as a governance structure that a franchisor adopts to reduce the problems of hierarchy. We looked at the integrative role of four agency-based variables by applying event history analysis to a longitudinal data set composed of almost all the sectors in the economy that use franchising. Specifically, we proposed that by using multi-unit franchising a franchisor slices its hierarchy and substitutes lower-level employee monitors with independent entities—area developers or master franchisees. Because their compensation depends entirely on outlet performance, these independent entities are more motivated to monitor the outlets compared with employee monitors. Hence, besides slicing off the lower-level hierarchy, the franchisor needs to monitor the multi-unit franchisees less compared with employee monitors, which can further reduce the size of required internal hierarchy. Whereas a master franchisee acts as a mini-franchisor in its territory, an area developer acts as an independent mini-hierarchy. Thus, area development consists of two hierarchical components joined together with an independent contract. Their relatively smaller size compared to the franchisor (Wadsworth 2002) ensures that area developers are relatively less burdened by the problems of hierarchy. This research suggests several avenues for further study. First, franchising is a stylized governance structure as it involves fairly standard and relatively complete take-it-or-leave-it contracts. It would be interesting to replicate this study in other settings where organizations may prefer hierarchies, even in adverse conditions, due to incomplete contracts. Second, this study focused on franchisors’ reasons to adopt multi-unit franchising; it would be interesting to integrate the franchisees’ reasons for operating multiple outlets too (Darr, Argote, and Epple 1995). Third, while this study has highlighted the efficiency gained by adopting multi-unit franchising, there could be efficiency loss due to multi-unit franchisees’ relative lack of experience and resultant inconsistency in brand presentation and customer service. It would be interesting to compare the performance of outlets under different governance structures. Fourth, flattening of hierarchy—by providing performance-based compensation and other long-term incentives to employees—represents an alternative approach to reduce the size of internal hierarchy (Rajan and Wulf 2006). It would be interesting to explore conditions that may lead organizations to choose one approach over the other—slicing or flattening—to achieve a leaner hierarchy. Fifth, although both area development and subfranchising help reduce the size of hierarchy, they reveal some key differences. Subfranchising relies on the more efficient control of franchisee free riding by master franchisees; area development, on the other hand, gives residual claims of multiple outlets to area developers and substitutes their outlet managers’ shirking for franchisee free riding. Which form of moral hazard is a franchisor more likely to endure at the outlet level: shirking or free riding? It would be interesting to study factors that may influence the preference for one mode over the other. Because the monitoring hierarchy in a franchise system is comparable to the internal hierarchy in a typical organization, the idea of slicing and shifting lower-level hierarchy to contractors can be extended to organizations in other settings. For example, when firms outsource their business processes, in effect, they shift their lower-level hierarchies to independent contractors and reduce the size of their internal hierarchies. This view offers an alternative argument for outsourcing, which has been seen primarily as a way to cut labor costs. Conventional wisdom suggests that outsourcing becomes less attractive as the labor cost savings decline. This research however suggests that besides lower labor costs, outsourcing can deliver sustainable savings by allowing a firm to reduce the size of its internal hierarchy. Thus declining labor cost savings may make offshoring—where firms in developed countries move jobs to less developed countries to save on labor costs—less attractive but outsourcing is likely to remain attractive. This may manifest in offshored jobs returning to the home country but remaining outsourced, that is, still done by independent contractors. Furthermore, this view suggests that contractors be considerably smaller than the firms; such small contractors are likely less burdened with the problems of hierarchy. If contractors were to get too large, they may also face similar problems of hierarchy, and in an attempt to reduce these problems they themselves may start outsourcing. This alternative argument for outsourcing gets some support; for example, Azoulay (2004) found that pharmaceutical firms outsourcing their clinical trials based their decision not on the trade-off between market and hierarchy, but on the choice between the hierarchy of their own firm and the hierarchy of their contractors.