عنوان انگلیسی
Why do entrepreneurs use franchising as a financial tool? An agency explanation
دانلود فوری مقاله + سفارش ترجمه 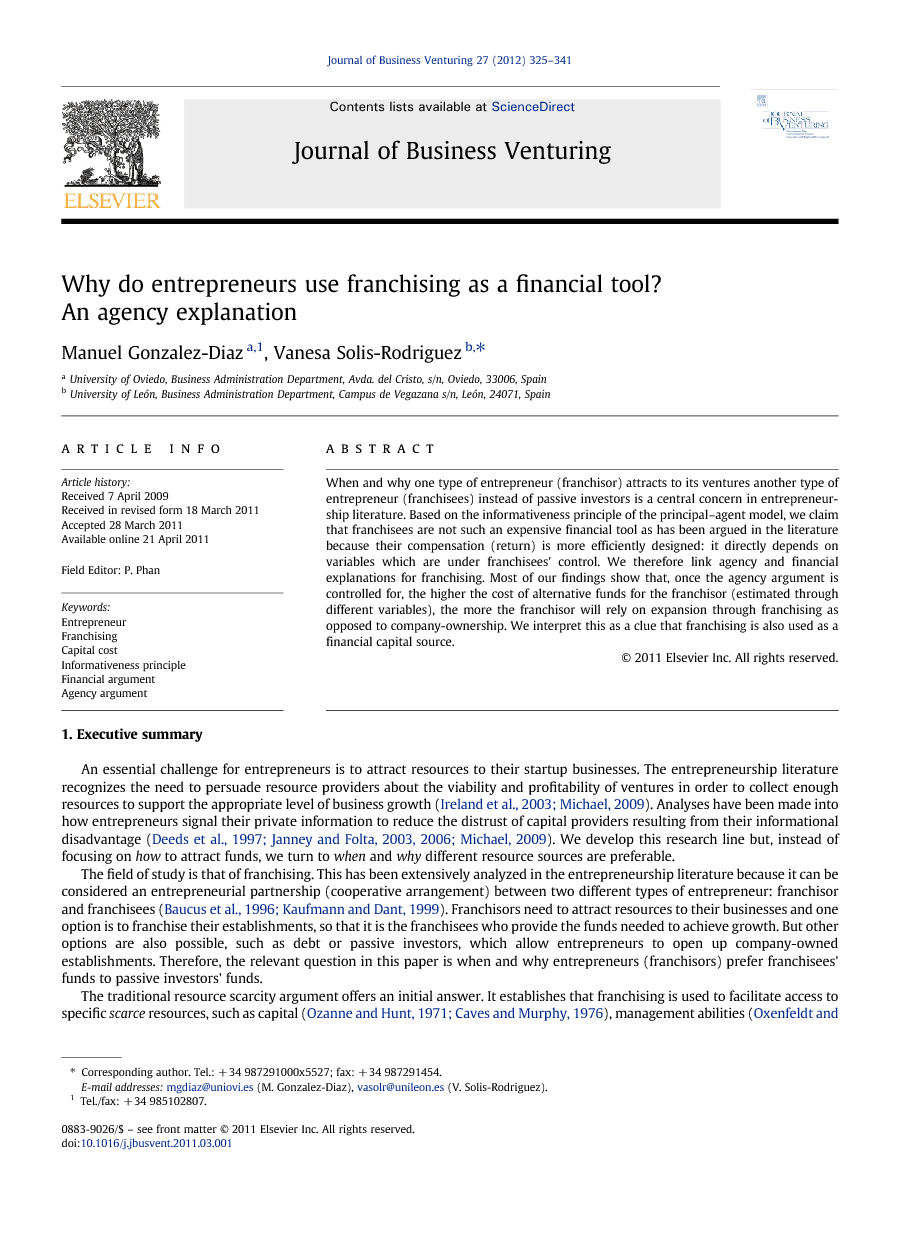 When and why one type of entrepreneur (franchisor) attracts to its ventures another type of entrepreneur (franchisees) instead of passive investors is a central concern in entrepreneurship literature. Based on the informativeness principle of the principal–agent model, we claim that franchisees are not such an expensive financial tool as has been argued in the literature because their compensation (return) is more efficiently designed: it directly depends on variables which are under franchisees' control. We therefore link agency and financial explanations for franchising. Most of our findings show that, once the agency argument is controlled for, the higher the cost of alternative funds for the franchisor (estimated through different variables), the more the franchisor will rely on expansion through franchising as opposed to company-ownership. We interpret this as a clue that franchising is also used as a financial capital source.

This study analyses if financial reasons explain the use of franchising by showing that variations in the franchisor's prices of alternative sources of capital alter the use of franchising, once the agency argument is controlled for. We use the informativeness principle (Holmstrom, 1979) of principal–agent model to rationalize the advantage of franchisee capital in terms of risk premium. We claim that using franchising as a financial tool is not as expensive as has been claimed (Rubin, 1978) because the disadvantage in terms of exogenous risk allocation may be compensated by greater direct control over the investment so that the franchisees perceive lower variability. Franchisees have better information about managers' effort and skills and also have more chances of recovering their investment in the case of the franchisor's bankruptcy than shareholders and lenders. We apply a partial adjustment model, borrowed from the financial and capital structure literature, because it fits with the theoretical model and the empirical evolution of the percentage of franchised outlets. The results indicate, first, that if expansion through equity/debt is more expensive (with prices being proxied by the asset backing ratio, the cost of debt and the chain's liquidity), franchising will be used more. However, other capital cost proxy variables are not so consistent across different estimations, so we have to be cautious about this result. Second, if franchisor experience rises and/or the up-front investment decreases, franchising is likely to be used more. Third, franchisors with financial partners as shareholders franchise fewer establishments than chains without this type of shareholder. Finally, we verified the partial adjustment of the ownership structure, obtaining a high adjustment speed (78–69%). This was to be expected because franchisors have good tools (new openings) for reaching the target level of franchising. Entrepreneurs may draw some lessons from these results. First, the results suggest that entrepreneurs become franchisors in order to attract financial resource providers, probably because, by becoming franchisees, fund providers may demand lower return on capital than more conventional providers such as shareholders and lenders. However, the emphasis should be on carrying out a cost-benefit analysis when deciding between franchising and other conventional formulae because franchising is neither good nor bad but depends on relative prices. Highlighting some costs and benefits which are not explicit payments or incomes, particularly for unlisted companies, may help practitioners carry out their analyses and ask for the relevant variables. An example of such benefits is, as the literature had indicated, the best incentive alignment which leads to lower capital cost ( Lafontaine, 1992, Combs and Ketchen, 1999 and Combs et al., 2004). We now add that, in comparison with other passive investors, franchisees have better tools to influence the return on their investments which also leads them to accept a lower return on capital. We also show which variables influence franchising or other funding costs, offering clues to entrepreneurs about how to reduce these costs. For chain expansion, it is important to attract potential franchisees to the business, so it is necessary to act on the variables that make the franchise package attractive. Whatever the potential profit from the outlet, it is important to keep the initial investment as low as possible and to offer guarantees that the business will be successful, for which prior experience and brand reputation are essential. For attracting shareholders and lenders, whatever the explicit price of such resources, the key lies in offering good guarantees to stakeholders in the form, for example, of real guarantees. Finally, from a more research-oriented perspective, our results show that attracting cheap financial resources is a reason for franchising. But if franchisees do not perceive lower risk and/or less agency problems they will not accept a lower return on assets and will not be cheap fund providers. This suggests that the idea of franchising as a collaboration among entrepreneurs is essential and we need to know much more about how franchisees and franchisors match each other. What do they look for in their partner? Unless we know the reasons for both decisions, we cannot know the real nature of franchising, an argument that could be extended to other types of alliance. Not only is it interesting to consider the psychological profiles of the different types of franchising entrepreneur (Grünhagen and Mittelstaedt, 2005) or the reasons why they might prefer to collaborate rather than remain independent ( Kaufmann, 1999 and Williams, 1999) but we should also find the determinants of the partner's choice. Knowing how a franchisee decides between two potential chains and how a franchisor selects its franchisees might clarify what parties are looking for in such alliances and the nature of their collaboration. A limitation of this work is that the econometric results seem sensitive to the proxy variable employed for the cost of capital. Further empirical research is needed to clarify these differences. Furthermore, we focused only on firms which, at least, intended to franchise and did not consider firms which had totally ruled out the possibility of franchising and were not looking for local partners. Inclusion of the latter, which would constitute an interesting future research line, would allow the direct relation between the cost of capital for the entrepreneur and the use of franchising to be assessed for the whole business universe. It might even reveal different reasons for starting to franchise. Finally, a longitudinal study might measure how franchising is affected by the evolution of financial markets, particularly debt and venture capital markets.