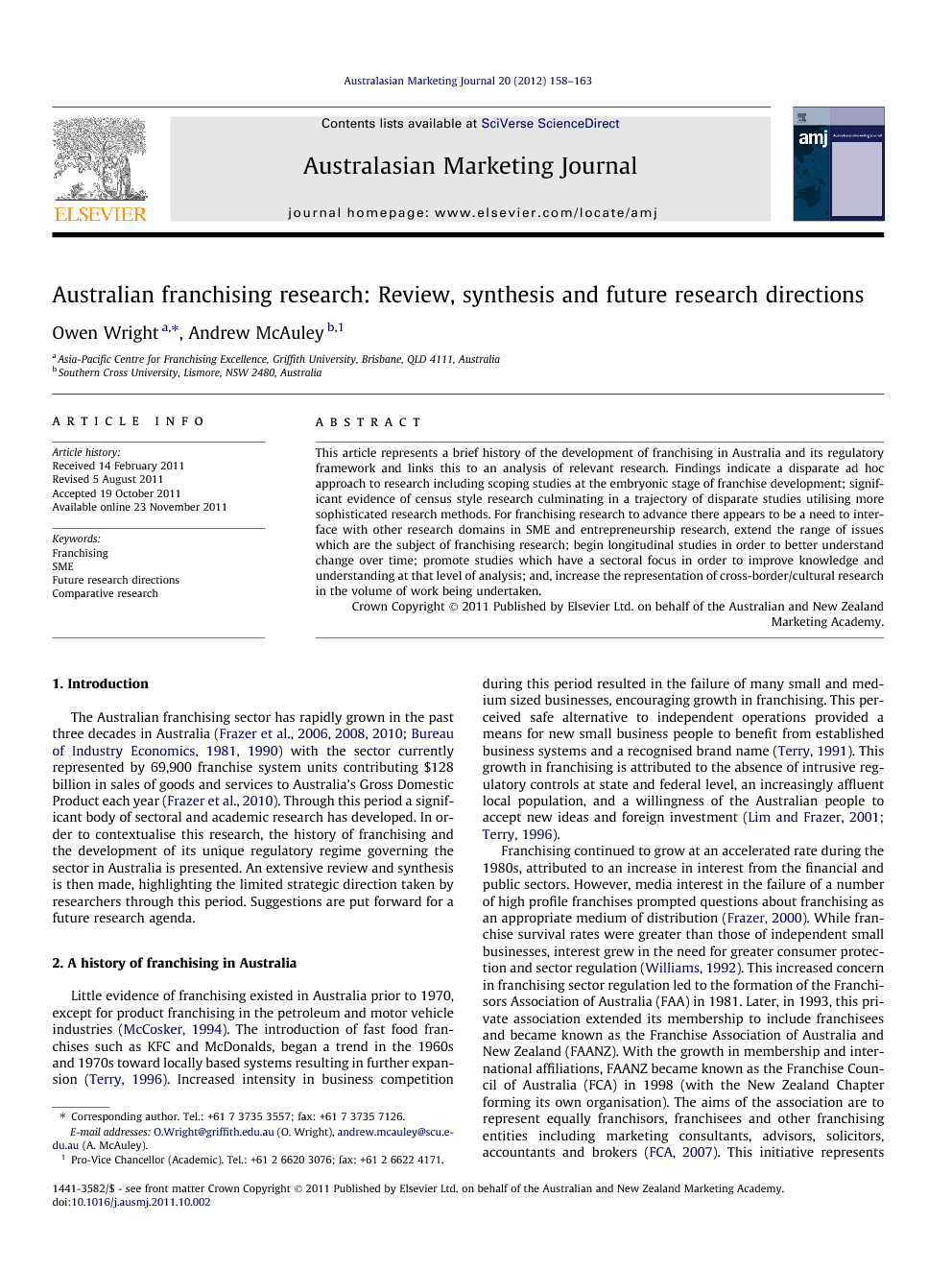 This article represents a brief history of the development of franchising in Australia and its regulatory framework and links this to an analysis of relevant research. Findings indicate a disparate ad hoc approach to research including scoping studies at the embryonic stage of franchise development; significant evidence of census style research culminating in a trajectory of disparate studies utilising more sophisticated research methods. For franchising research to advance there appears to be a need to interface with other research domains in SME and entrepreneurship research, extend the range of issues which are the subject of franchising research; begin longitudinal studies in order to better understand change over time; promote studies which have a sectoral focus in order to improve knowledge and understanding at that level of analysis; and, increase the representation of cross-border/cultural research in the volume of work being undertaken.

The Australian franchising sector has rapidly grown in the past three decades in Australia (Frazer et al., 2006, Frazer et al., 2008, Frazer et al., 2010, Bureau of Industry Economics, 1981 and Bureau of Industry Economics, 1990) with the sector currently represented by 69,900 franchise system units contributing $128 billion in sales of goods and services to Australia’s Gross Domestic Product each year (Frazer et al., 2010). Through this period a significant body of sectoral and academic research has developed. In order to contextualise this research, the history of franchising and the development of its unique regulatory regime governing the sector in Australia is presented. An extensive review and synthesis is then made, highlighting the limited strategic direction taken by researchers through this period. Suggestions are put forward for a future research agenda.

This paper identifies broad areas of research of franchising over a 30-year period in Australia. A gradual shift from a narrow focus on descriptive and scoping studies in the 1980s to a profusion of studies in a variety of areas from 2000 on e.g. international experience, motivations, governance, quality of service to name but a few are highlighted. In terms of method, most early studies utilised census style surveys evolving into a case based approach and then more advanced quantitative methods incorporated as the sector matured. Sample sizes gradually increased as early descriptive studies gathered pace with the scale of geographical coverage. However, it is possible to characterise the work as fragmented, dominated by a ‘snap-shot’ approach as evidenced by an almost complete dearth of longitudinal work. The franchising sector clearly lends itself to longitudinal studies. Franchising is easily identified and accessible both centrally (through the Franchise Council of Australia) as well as industry specific codification. This is an excellent opportunity for researchers to go beyond a static census based approach. This potential redirection of method lends itself to prescriptive questions such as “how should...franchising be done?” rather than the purely descriptive approaches of “how is...franchising done?” highlighted in this paper. A paradigmatic shift might appraise franchising activities from alternate perspectives (Elango and Fried, 1997). Research largely focussed on census style data to identify franchise sector size and trends. Post introduction of the Franchise Code of Conduct, a spate of research emerged limiting contribution to theoretical foundations supporting franchise system evolution and development. These reflections on regulatory influence and the cause and resolution of intra-system conflict dominate the literature of the past decade. However, while franchise sector participants (franchisors, regulators and the legal fraternity) determine the value of such studies, the ongoing direction of academic research remains limited. These limitations can be identified by the tenet caveat emptor. For example, the confinement of methods for franchisee recruitment and selection utilised by franchisors through the Code (caveat venditor – let the seller be aware) and identified in the Franchising Australia surveys ( Frazer et al., 2006 and Frazer et al., 2008). This is tantamount to insularity, keeping the development of franchise research on a separate trajectory to the broader SME literature. Therefore, to advance research in this area the following suggestions may provide fruitful lines of future enquiry: (a)Acknowledge the interface with other research domains in SME and entrepreneurship research. For example, UK studies highlight significant links between franchising and small business (Kirby and Watson, 1999 and Stanworth et al., 2004). Developing a link between these areas will benefit from greater cognisance of the body of literature developed over a number of years in relation to, for example, SMEs. In particular the work undertaken by marketing and entrepreneurship researchers will highlight a significant source of comparative insights. Much literature exists, for example, Hill, 2001a and Hill, 2001b detailing insights of marketing in SMEs; while a methodological overview of Gilmore (2010) draws lessons from ten years of research progress. Many of these approaches are pluralistic, using a variety of methods and often applying mixed methods intra-study. This kind of innovation in studying entrepreneurs/owner managers is crucial to understanding how, why, when and where they do business. Integration of this body of work to franchising research would be a valuable contribution to knowledge. (b)Systematically extend the range of issues that are the subject of franchise research e.g. including theoretical foundations of the more complex governance structures developing in Australia (the combination of multiple brands with multiple units operators, and so on), adoption of brand portfolios, mergers and acquisition, corporate governance in franchising and prospective active investor behaviour (Wright and Frazer, 2007). (c) Make a concerted effort to conduct longitudinal studies in order to better understand change over time. Longitudinal research increases validity of outcomes and is sensitive to long-term changes within the study. It is best to have a large sample at the outset to allow for attrition. This is particularly relevant where a panel or cohort study is undertaken. Another approach to longitudinal work is to do retrospective studies. These approaches are appropriate for work with the franchise sector. Indeed they can be combined and have been successfully so, for example, by Leonard-Barton (1990) who combined a real-time three-year study with a series of retrospective case studies. The latter offers the opportunity to identify patterns indicative of dynamic processes and the longitudinal study provides a microscopic understanding of the patterns as they evolve over time. As a consequence construct, internal and external validity tend to be more robust. (d) Promote studies with a sectoral focus to improve knowledge and understanding at that level of analysis. Many researchers use general surveys of business as a sampling base. However, it can be argued that part of the process of developing a mature research agenda should consider if contrasts are apparent within the franchising sector. For example, do tourism; retail; and, domestic service related franchise businesses possess particular characteristics worthy of understanding? (e) Increase the representation of cross-border/cultural research in the volume of work undertaken. The initial research gaps identified in this paper are starting points for what should now be addressed by researchers in the field. Cross-border research including, at times, cross-cultural research, should be promoted. There is a need for researchers in a range of countries (for example, the UK and the broader EU) to extrapolate beyond the US comparison and commence collaboration to create conceptual, empirical and methodological coherence to add significant value to the state of current knowledge represented in franchising literature.