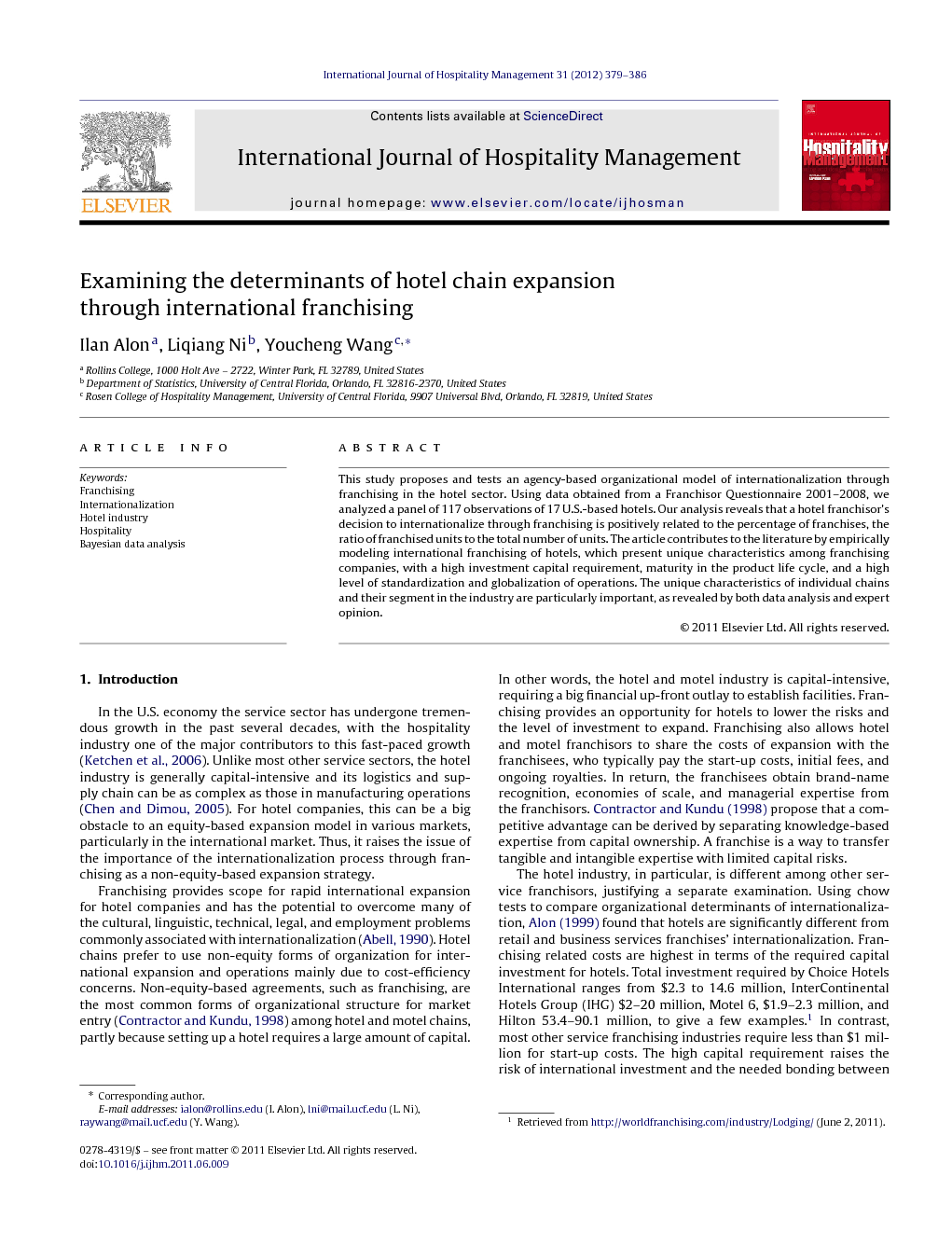 This study proposes and tests an agency-based organizational model of internationalization through franchising in the hotel sector. Using data obtained from a Franchisor Questionnaire 2001–2008, we analyzed a panel of 117 observations of 17 U.S.-based hotels. Our analysis reveals that a hotel franchisor's decision to internationalize through franchising is positively related to the percentage of franchises, the ratio of franchised units to the total number of units. The article contributes to the literature by empirically modeling international franchising of hotels, which present unique characteristics among franchising companies, with a high investment capital requirement, maturity in the product life cycle, and a high level of standardization and globalization of operations. The unique characteristics of individual chains and their segment in the industry are particularly important, as revealed by both data analysis and expert opinion.

In the U.S. economy the service sector has undergone tremendous growth in the past several decades, with the hospitality industry one of the major contributors to this fast-paced growth (Ketchen et al., 2006). Unlike most other service sectors, the hotel industry is generally capital-intensive and its logistics and supply chain can be as complex as those in manufacturing operations (Chen and Dimou, 2005). For hotel companies, this can be a big obstacle to an equity-based expansion model in various markets, particularly in the international market. Thus, it raises the issue of the importance of the internationalization process through franchising as a non-equity-based expansion strategy. Franchising provides scope for rapid international expansion for hotel companies and has the potential to overcome many of the cultural, linguistic, technical, legal, and employment problems commonly associated with internationalization (Abell, 1990). Hotel chains prefer to use non-equity forms of organization for international expansion and operations mainly due to cost-efficiency concerns. Non-equity-based agreements, such as franchising, are the most common forms of organizational structure for market entry (Contractor and Kundu, 1998) among hotel and motel chains, partly because setting up a hotel requires a large amount of capital. In other words, the hotel and motel industry is capital-intensive, requiring a big financial up-front outlay to establish facilities. Franchising provides an opportunity for hotels to lower the risks and the level of investment to expand. Franchising also allows hotel and motel franchisors to share the costs of expansion with the franchisees, who typically pay the start-up costs, initial fees, and ongoing royalties. In return, the franchisees obtain brand-name recognition, economies of scale, and managerial expertise from the franchisors. Contractor and Kundu (1998) propose that a competitive advantage can be derived by separating knowledge-based expertise from capital ownership. A franchise is a way to transfer tangible and intangible expertise with limited capital risks. The hotel industry, in particular, is different among other service franchisors, justifying a separate examination. Using chow tests to compare organizational determinants of internationalization, Alon (1999) found that hotels are significantly different from retail and business services franchises’ internationalization. Franchising related costs are highest in terms of the required capital investment for hotels. Total investment required by Choice Hotels International ranges from $2.3 to 14.6 million, InterContinental Hotels Group (IHG) $2–20 million, Motel 6, $1.9–2.3 million, and Hilton 53.4–90.1 million, to give a few examples.1 In contrast, most other service franchising industries require less than $1 million for start-up costs. The high capital requirement raises the risk of international investment and the needed bonding between franchisee and franchisor inherent in the agency relationship. Hotels have decoupled the ownership of property from the ownership of intellectual assets and have extensively used non-equity modes of entry internationally to defray expansion with minimum risk. However, internationalization through franchising can be a complex process affected by many forces, particularly organizational factors and market conditions. Although previous research has examined factors contributing to internationalization through franchising as an entry mode in the manufacturing industry (e.g., Baker and Dant, 2008 and Gatignon and Anderson, 1988) and among fast food and service franchisors (e.g., Ni and Alon, 2010), this study narrows the research gap by explaining the internationalization of franchising systems in the hotel industry by both empirically testing a theory-driven model and corroborating the model with in-depth interviews of industry practitioners. In particular, this study attempts to identify and understand the impacts of organizational factors and market-condition variables on the decision of hotel companies to enter international markets through franchising within a framework of agency-based theory. This study uses Burton and Cross’ (1995) definition of international franchising. They define international franchising as “a foreign market entry mode that involves a relationship between the entrant (the franchisor) and a host country entity, in which the former transfers, under contract, a business package (or format), which it developed and owns, to the latter” (p. 36). This definition is suitable because our study does not differentiate between the various modes of international franchising. It focuses on the decision to internationalize through franchising, regardless of the mode of entry. In other words, franchising is a business relationship whereby a franchisor permits a franchisee to use its brand name, product, or business system in a specified and ongoing manner in return for a fee (Felstead, 1993). This method is commonly distinguished from other international market entry modes, such as leasing agreements or management contracts that are not included in the current study.