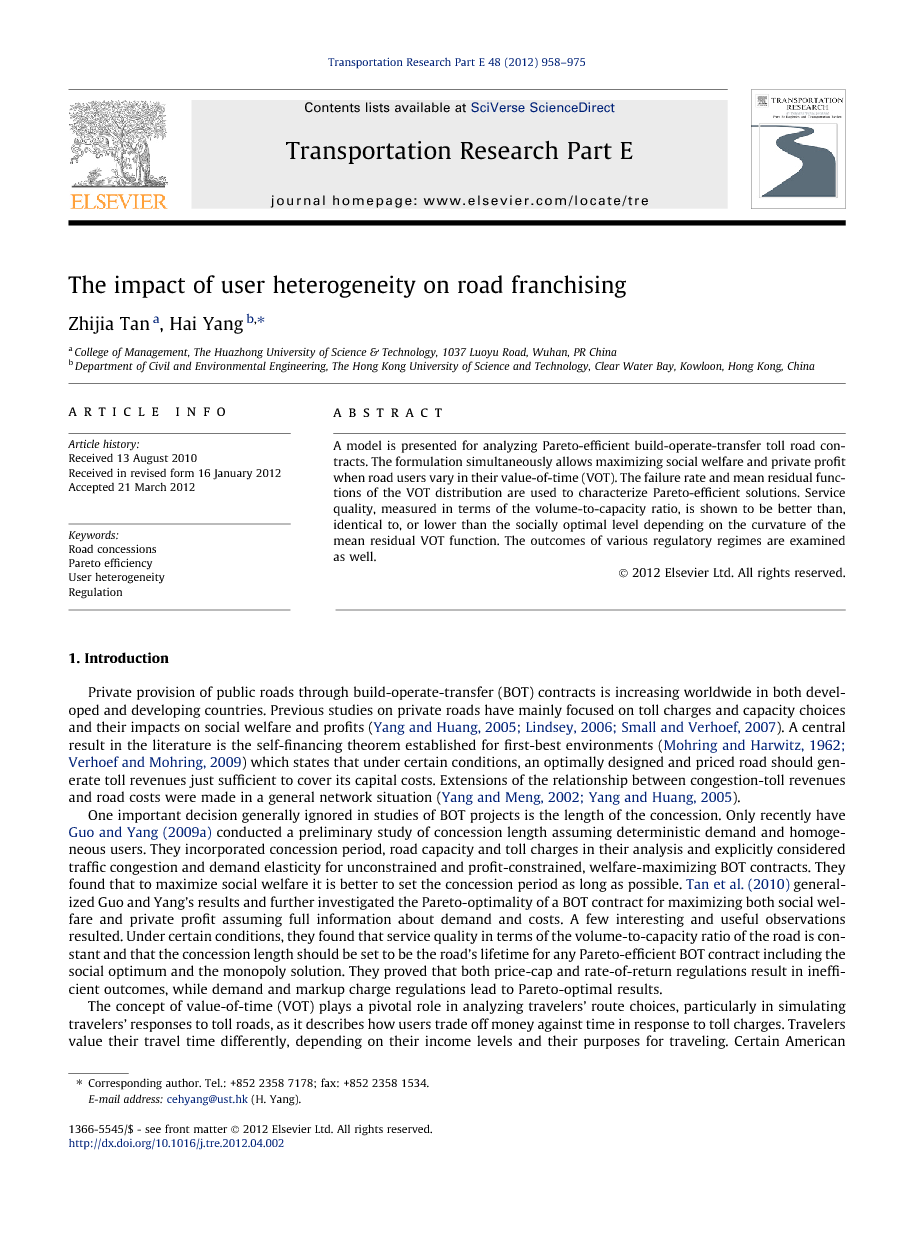 A model is presented for analyzing Pareto-efficient build-operate-transfer toll road contracts. The formulation simultaneously allows maximizing social welfare and private profit when road users vary in their value-of-time (VOT). The failure rate and mean residual functions of the VOT distribution are used to characterize Pareto-efficient solutions. Service quality, measured in terms of the volume-to-capacity ratio, is shown to be better than, identical to, or lower than the socially optimal level depending on the curvature of the mean residual VOT function. The outcomes of various regulatory regimes are examined as well.

The social welfare and the profitability are the main concerns when a BOT contract is considered to provide a public road. This study has introduced a bi-objective maximization problem to analyze the Pareto-efficient BOT contracts in the presence of user heterogeneity. User heterogeneity was explicitly characterized by using the failure rate and various mean residual VOT functions. A theoretical analysis was developed for the proposed bi-objective problem which can explain the Pareto-efficient concession period, toll level and capacity. Explicitly incorporating user heterogeneity facilitated investigating how service quality varies along the Pareto-optimal frontier. Highway service quality measured in terms of the volume-to-capacity ratio was shown to depend on the curvature of the mean residual VOT function. If the mean residual VOT function of the VOT distribution is convex (affine, concave), then the service quality improves (is unchanged, deteriorates) along the Pareto-efficient frontier from the monopoly optimum to the social optimum. The effects of a price cap, a rate-of-return limit, a demand ceiling and a markup limit were also examined. Unlike the situation with homogeneous users, none of the regulatory regimes was found to be efficient in achieving a predetermined Pareto-efficient BOT contract. The model and findings help expand our understanding of BOT contract negotiations. Nonetheless, many other theoretical and practical issues remain largely untouched. For example, the differences in the public and private cost of capital and risk attitudes should affect the perceptions of an efficient BOT contract (Small, 2010). It also remains obscure whether the optimal concession period is free from the effect of user VOT heterogeneity for more general VOT distributions. Other interesting extensions might include consideration of route choice effects when the alternative free road is congestible as well, and investigation of the results of a competitive auction in the presence of user heterogeneity.