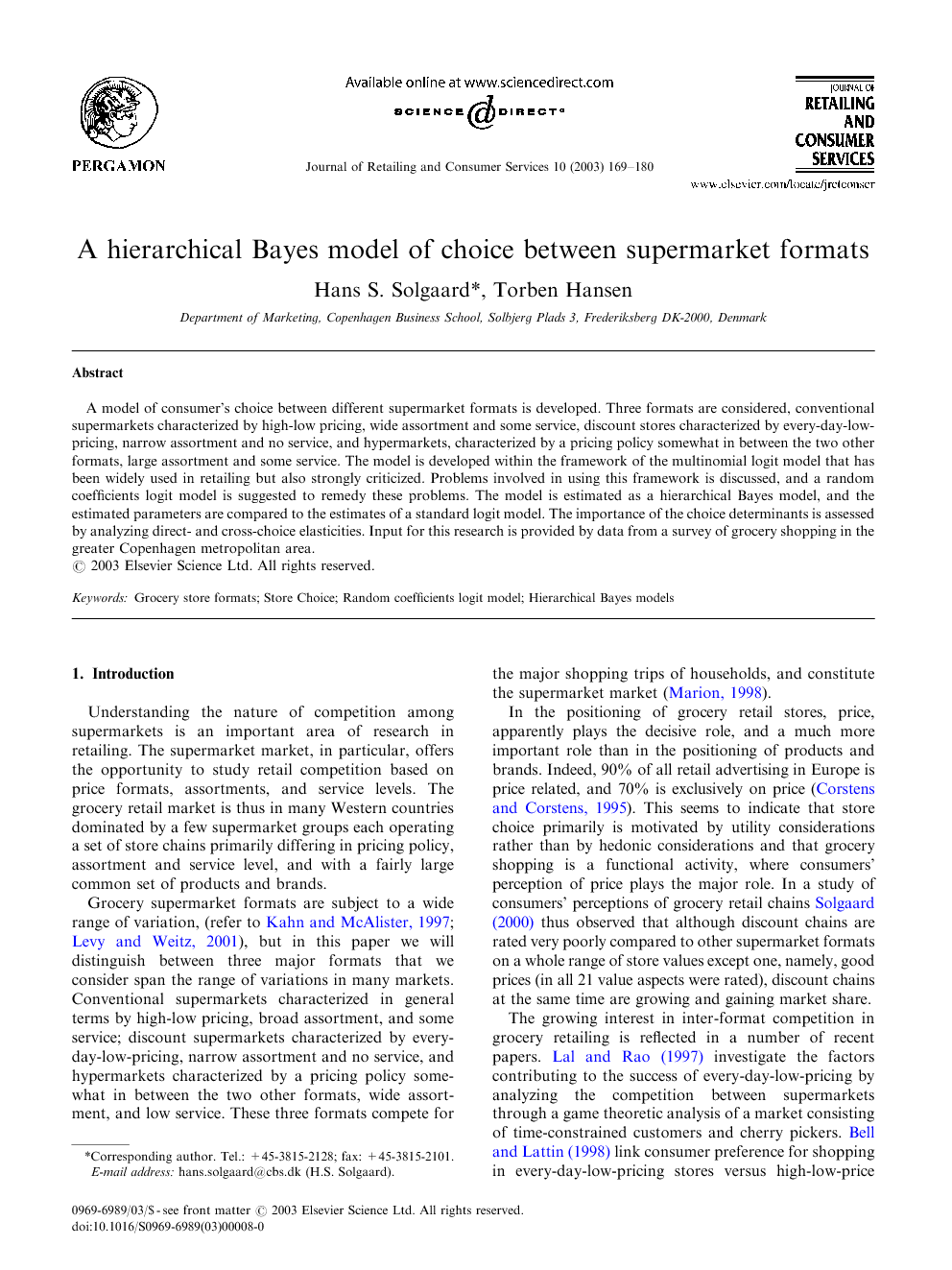 A model of consumer's choice between different supermarket formats is developed. Three formats are considered, conventional supermarkets characterized by high-low pricing, wide assortment and some service, discount stores characterized by every-day-low-pricing, narrow assortment and no service, and hypermarkets, characterized by a pricing policy somewhat in between the two other formats, large assortment and some service. The model is developed within the framework of the multinomial logit model that has been widely used in retailing but also strongly criticized. Problems involved in using this framework is discussed, and a random coefficients logit model is suggested to remedy these problems. The model is estimated as a hierarchical Bayes model, and the estimated parameters are compared to the estimates of a standard logit model. The importance of the choice determinants is assessed by analyzing direct- and cross-choice elasticities. Input for this research is provided by data from a survey of grocery shopping in the greater Copenhagen metropolitan area.

Understanding the nature of competition among supermarkets is an important area of research in retailing. The supermarket market, in particular, offers the opportunity to study retail competition based on price formats, assortments, and service levels. The grocery retail market is thus in many Western countries dominated by a few supermarket groups each operating a set of store chains primarily differing in pricing policy, assortment and service level, and with a fairly large common set of products and brands. Grocery supermarket formats are subject to a wide range of variation, (refer to Kahn and McAlister, 1997; Levy and Weitz, 2001), but in this paper we will distinguish between three major formats that we consider span the range of variations in many markets. Conventional supermarkets characterized in general terms by high-low pricing, broad assortment, and some service; discount supermarkets characterized by every-day-low-pricing, narrow assortment and no service, and hypermarkets characterized by a pricing policy somewhat in between the two other formats, wide assortment, and low service. These three formats compete for the major shopping trips of households, and constitute the supermarket market (Marion, 1998). In the positioning of grocery retail stores, price, apparently plays the decisive role, and a much more important role than in the positioning of products and brands. Indeed, 90% of all retail advertising in Europe is price related, and 70% is exclusively on price (Corstens and Corstens, 1995). This seems to indicate that store choice primarily is motivated by utility considerations rather than by hedonic considerations and that grocery shopping is a functional activity, where consumers’ perception of price plays the major role. In a study of consumers’ perceptions of grocery retail chains Solgaard (2000) thus observed that although discount chains are rated very poorly compared to other supermarket formats on a whole range of store values except one, namely, good prices (in all 21 value aspects were rated), discount chains at the same time are growing and gaining market share. The growing interest in inter-format competition in grocery retailing is reflected in a number of recent papers. Lal and Rao (1997) investigate the factors contributing to the success of every-day-low-pricing by analyzing the competition between supermarkets through a game theoretic analysis of a market consisting of time-constrained customers and cherry pickers. Bell and Lattin (1998) link consumer preference for shopping in every-day-low-pricing stores versus high-low-price stores to the expected dollar size of the household's shopping basket. Bell et al. (1998) demonstrate how every-day-low-pricing and high-low-pricing stores present shoppers with a trade-off between fixed and variable costs of shopping, and show that high-low-price stores can offer lower total costs for small baskets, while every-day-low-price stores offer lower total costs for large baskets. Finally, Galata et al. (1999); explore the nature of segmentation in store choice behavior where competing supermarkets offer every-day-low-price and high-low promotional price formats. They show contrary to previous research that supermarkets with different price formats may not induce extensive store-format switching among consumers. In this paper we take another look at consumers’ choice between different grocery store formats, and investigate the sensitivity of this choice to changes in the consumers’ perceptions of the price level, and other variables that influence their decision of which type of store format to patronize. We analyze choice behavior in a Danish setting. Against this background it is the objective of this paper to model the store choice decision of supermarket shoppers so as to be able to investigate the sensitivity of the store choice decision to changes in shopper's perceptions of the choice determinants. An additional objective is to discuss problems involved in operationalizing store choice models, using the framework of the multinomial logit model, and to suggest alternative model specifications to remedy the identified problems. The multinomial logit model has been widely used in store choice modeling, but also strongly criticized. The primary motivations for rejecting the multinomial logit model in the study of store choice behavior have been the desire to avoid the independence from irrelevant alternatives (IIA) property, and to avoid the assumption that the coefficients of the variables that enter the model take the same values for all consumers. The remainder of the paper is organized into five sections. Section 2 provides an outline of the store choice process and of the determinants of choice. Section 3 discusses problems involved in operationalizing models of store choice using a standard logit framework, and presents a random coefficients logit specification to describe household store choice behavior. The model is operationalized and estimated as a hierarchical Bayes model. Section 4 describes the choice setting and the database utilized to estimate the model. The results of empirical estimations of the model are presented in Section 5. The results are discussed in Section 6.

Price level, assortment and distance (location) appear as anticipated to be the important drivers for consumers’ choice between store formats. Quality and service on the other hand do not differentiate between formats. A main reason for this last result could be that the majority of stores that constitutes the choice set belongs to one of only two supermarket groups, and that there is a fairly large common set of standardized products and brands between store chains across store formats. Further it is noted that the importance of ‘distance’ varies the most across consumers. This should be seen in the light that discount stores and conventional supermarkets in many areas of the metropolitan region under consideration are situated in close proximity to each other. Thus for many small households and households without a car the perceived marginal costs of shopping at a hypermarket located far away may well exceed the perceived benefits. Finally, assortment appears to be the most important single driver for the choice between store formats. A reason for this could be that we consider the most preferred and chosen store (and thus the selected store format) as the store in which the consumer spends the largest share of the household's grocery budget. That is to say that the chosen store generally also will be the target for the household's major shopping trip in the considered period, and thus a wide and good assortment means that the grocery shopping can be done in a single store. Table 5 presents the mean direct and cross-elasticity of choice probabilities with respect to perceived price, perceived assortment and distance with the posterior standard deviations in parenthesis. The table provides additional insight into the competition between the store formats. The hypermarket format generally has the largest direct elasticity (entries in the diagonal) for the three variables, followed by the discount format and conventional supermarket format. On the other hand an analysis of the off diagonal entries, the cross elasticities, reveal which store format is most influenced by changes in a competitor's store values. For price the discount format appears to have the greatest influence, while the conventional supermarket format exerts the largest effect with respect to assortment. Concerning distance the hypermarket format seems to be the most sensitive and the least influential.For store or chain management the store choice model allows for an assessment of a store's competitive situation at a given point in time or across a well-defined time period, depending on the data input. A store's strengths and weaknesses on important store attributes and in addition on various aspects of these store attributes may thus be evaluated. The diagnosis of the competitive situation may then serve as the basis for formulation of marketing strategies. To derive specific managerial implications in terms of actions that for instance store management could engage in to improve its store's competitive situation, we would need estimates of the costs and benefits involved in changing the consumers’ perception of various aspects of store attributes from their current levels. For instance the substantive problem of measuring the effect of a change in an aspect of store assortment for a particular store-outlet on consumers’ perceptions of the store, and hence choice of store, can be tackled by our store model in combination with conjoint analysis. Conjoint analysis can provide a translation of changes in objective store attributes into changes in perceptions. Via the store model the effect of the specific design change on store choice behavior can then be assessed. In this paper we have shown how some of the major problems in operationalizing store choice models using the framework of the logit model potentially could be overcome by an alternative model specification, the random parameters or coefficients logit model, and we have demonstrated how hierarchical Bayes estimation appear to be an effective way of estimating random utility models. We presented an application of the store choice model, analyzing households’ choice between different formats of grocery retail stores. The application demonstrated the potential usefulness of the random coefficients logit model as compared to the standard logit model.