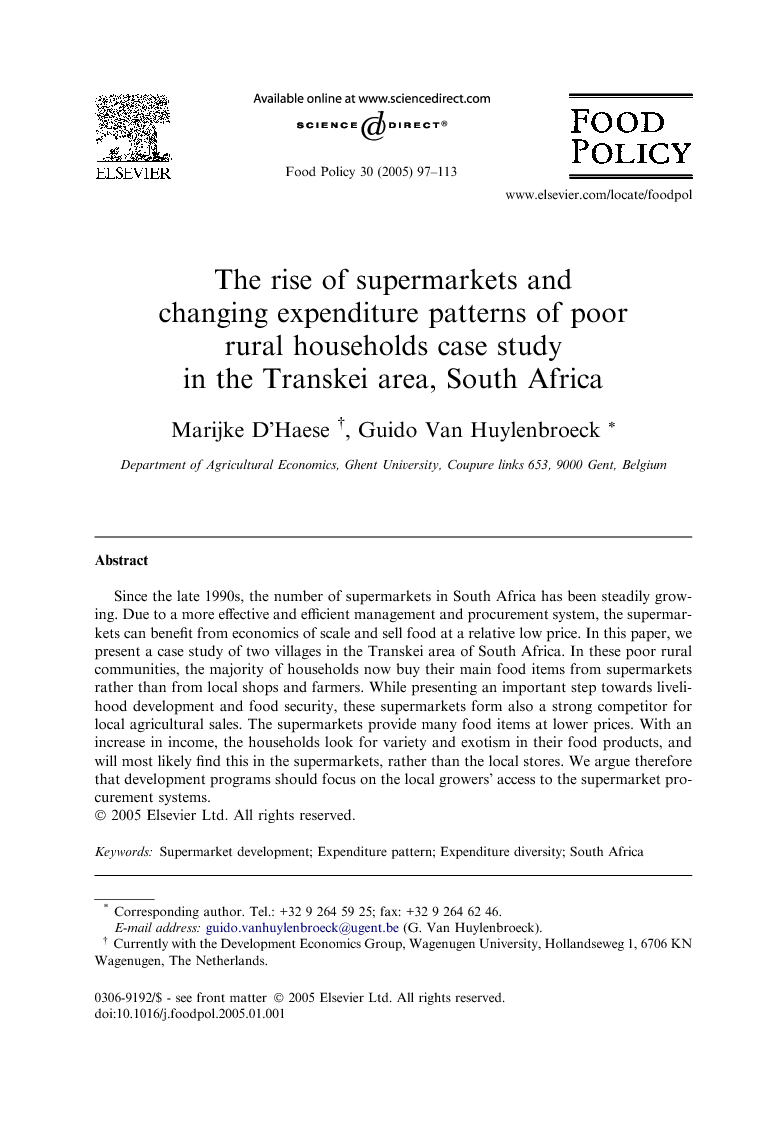 Since the late 1990s, the number of supermarkets in South Africa has been steadily growing. Due to a more effective and efficient management and procurement system, the supermarkets can benefit from economics of scale and sell food at a relative low price. In this paper, we present a case study of two villages in the Transkei area of South Africa. In these poor rural communities, the majority of households now buy their main food items from supermarkets rather than from local shops and farmers. While presenting an important step towards livelihood development and food security, these supermarkets form also a strong competitor for local agricultural sales. The supermarkets provide many food items at lower prices. With an increase in income, the households look for variety and exotism in their food products, and will most likely find this in the supermarkets, rather than the local stores. We argue therefore that development programs should focus on the local growers’ access to the supermarket procurement systems.

The findings would suggest that the local shops and local growers are unable to compete with the supermarkets that are ever-growing in number and importance; not only in the case study area, but also in many developing areas (described in Weatherspoon and Reardon, 2003). But whether supermarkets have a positive or negative impact for rural development remains an open question. Von Braun (IFPRI, 2003) indicates that the gains for the poor from supermarket expansion depends on their net benefits as consumers through prices, time costs and food safety, on their access to markets as growers and on employment skills and wage effects in the whole value-added food chain. On the one hand the importance of supermarkets for the food security of the households should not be underestimated. The supermarket sector provides quality food at a lower price than other shopping outlets. Buying the food instead of producing it themselves gives the households labour time to invest in other income generating activities. Timmer (1997) proposed a theoretical model showing that agricultural transformation is accompanied with a decreased diversity of agricultural production on the farms, an increased diversity within the agricultural sector and an increased variety of food consumed in the households. The reason for agricultural production thereby shifts from subsistence to specialised production of a limited variety of crops or livestock on-farm. This transformation is however only possible if rural households find a cheap market to buy their daily required food. Supermarkets can play this role and may furthermore provide a new market for the produce of the growers. Yet as discussed above in the study area poor development of the production capacity and trade deficiency prevent the community from fully benefiting from these new possibilities. On the downside, the money spent in the supermarkets represent expenditure outside the local economy, with a depressing effect on the multipliers as they are direct competitors to local sales. Supermarkets have taken over the role of the local traders also for these households in the sample who have a low level of income. As shown a large part of the available income is spent on bulk goods, bought once or twice a month in a supermarket. The fresh fruits and vegetables are produced from their own garden. In conclusion, a major challenge lies in linking the local growers and entrepreneurs to these new distribution channels. Governments and development practitioners should recognise the growing trend of supermarket development and have a supporting role in integrating smallholders into the new supply chains. Further research is needed into the development of a pro-poor policy, which should concentrate on improved access to assets, increased productivity of the assets held by the poor, institutional development for increased marketing and reduced vulnerability to price shocks. Although promising initiatives in this respect, the impact of the AgriBEE on small-scale South African farmers and entrepreneurs remains uncertain.