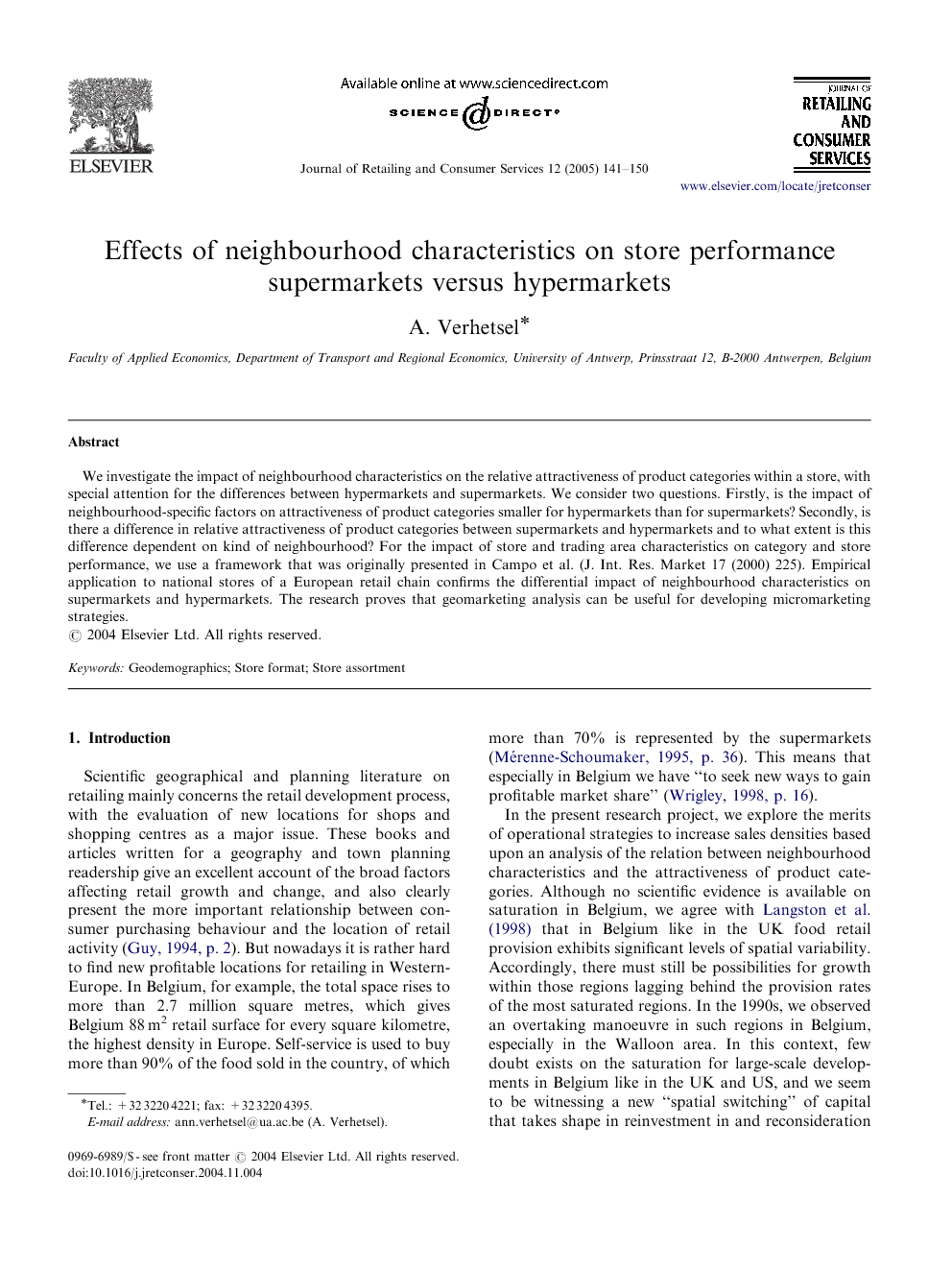 Scientific geographical and planning literature on retailing mainly concerns the retail development process, with the evaluation of new locations for shops and shopping centres as a major issue. These books and articles written for a geography and town planning readership give an excellent account of the broad factors affecting retail growth and change, and also clearly present the more important relationship between consumer purchasing behaviour and the location of retail activity (Guy, 1994, p. 2). But nowadays it is rather hard to find new profitable locations for retailing in Western-Europe. In Belgium, for example, the total space rises to more than 2.7 million square metres, which gives Belgium 88 m2 retail surface for every square kilometre, the highest density in Europe. Self-service is used to buy more than 90% of the food sold in the country, of which more than 70% is represented by the supermarkets (Mérenne-Schoumaker, 1995, p. 36). This means that especially in Belgium we have “to seek new ways to gain profitable market share” (Wrigley, 1998, p. 16). In the present research project, we explore the merits of operational strategies to increase sales densities based upon an analysis of the relation between neighbourhood characteristics and the attractiveness of product categories. Although no scientific evidence is available on saturation in Belgium, we agree with Langston et al. (1998) that in Belgium like in the UK food retail provision exhibits significant levels of spatial variability. Accordingly, there must still be possibilities for growth within those regions lagging behind the provision rates of the most saturated regions. In the 1990s, we observed an overtaking manoeuvre in such regions in Belgium, especially in the Walloon area. In this context, few doubt exists on the saturation for large-scale developments in Belgium like in the UK and US, and we seem to be witnessing a new “spatial switching” of capital that takes shape in reinvestment in and reconsideration of smaller stores. In the light of this renewed interest in smaller stores on the one hand, and the probably saturated market for large-scale units on the other, we compare the effects of neighbourhood characteristics on the relative attractiveness of product categories in supermarkets and hypermarkets. In former research (Campo et al., 2000), only on supermarkets, we found evidence of interaction effects between the characteristics of the area in which a store is located and the relative attractiveness of categories offered by a store. Moreover, we found that socio-demographic and neighbourhood characteristics influence store performance to an extent that a local optimum yields an additional yearly return. This means that one can earn more money when shelf space for different product categories is adjusted to neighbourhood characteristics. These results contain a call for store-specific marketing strategies that are still rare these days. In this paper, we present the results of two new research questions that focus on the comparison of the effect of location-specific factors for supermarkets and hypermarkets: 1. Is the impact of location-specific factors on attractiveness of product categories smaller for hypermarkets than for supermarkets? Hypermarkets have far more extensive service areas than supermarkets, so the typical characteristics of different neighbourhoods in a service area compensate for each other, this leads probably to a less typical sales pattern in the store. 2.Is there a difference in relative attractiveness of product categories between supermarkets and hypermarkets and this for different kinds of neighbourhoods? Hypermarkets have a broader assortment for several product categories, especially in non-food, so the attractiveness on different socio-economic groups can be different, as well as local competition can have a different impact. A parallel paper focuses on the question whether retailers should adjust their micromarketing strategies to type of outlet (Campo et al., 2004).

In this paper, we present a method to measure the different impact of neighbourhood characteristics on the relative importance of different product categories in supermarket versus hypermarket. A number of conclusions can be drawn from the results of the analyses. First, we can conclude that the impact of neighbourhood characteristics is bigger for supermarkets than for hypermarkets. In Belgium, as elsewhere in Western-Europe, evidence appears now to be emerging that new stores have a reduced average size (Wrigley, 1998). Langston et al. (1998, p. 62) concludes that the smaller stores are more profitable as site and construction costs have come down. Also recent changes in government legislation, tighter planning regulations and increasing competition urge the distribution sector to find smaller holes in the market. In Belgium nowadays we see the first experiments with smaller shops, mainly in the inner cities. According to our first conclusion these will be even more sensitive to neighbourhood characteristics, and consequently a professional product category management including spatial analysis is recommended. Secondly, different categories of clothing, the counter dairy and fine meat, bake-off and fish have quite different results in supermarkets and hypermarkets in neighbourhoods with relatively more young families with children, with a lot of singles, low income families and households of Islamic origin, with higher income families, with competition from speciality stores and with relatively many employees living outside the service-area. The implication of these findings is that different micro-marketing strategies are required in different types of neighbourhoods to make stores profitable. Neighbourhoods with a concentration of low income families, singles and Islamic households can profit from assigning more space to clothing in supermarkets. In higher income neighbourhoods however, space for clothing in supermarkets can be limited, hypermarkets should adjust the space share in favour of rather expensive food categories. Hypermarkets in neighbourhoods with many speciality stores suffer from competition with these and can profit of assigning more space to groceries and self-service dairy and fine meat, and again less space to clothing. In urbanised areas supermarkets should drop clothing space and pay special attention to their counters of fresh food, while hypermarkets in these areas should better limit these counters. Neighbourhoods with a concentration of employees from outside the area can profit from assigning more space to clothing and audio–video. In the present research project, however, we could not yet explain these different impacts of neighbourhood characteristics on product categories in supermarkets and hypermarkets. To accomplish that, a different approach is needed. Fieldwork involving consumer interviews could shed further light on the reasons underlying this finding.