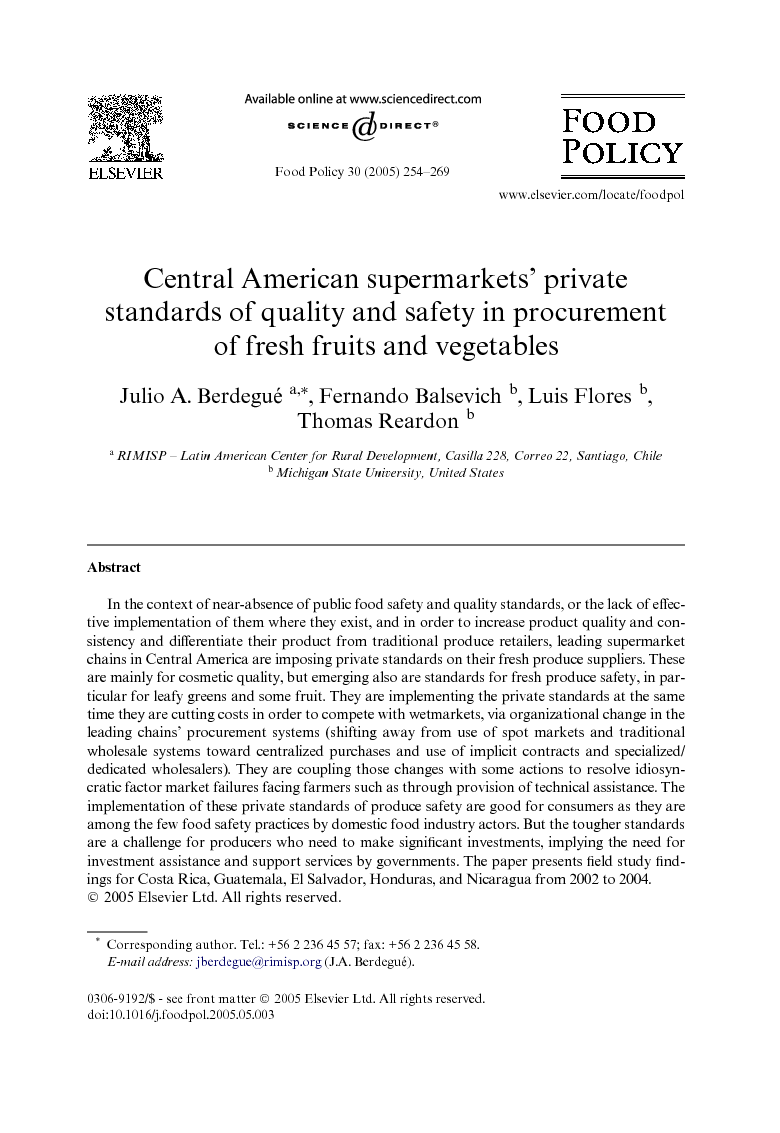 In the context of near-absence of public food safety and quality standards, or the lack of effective implementation of them where they exist, and in order to increase product quality and consistency and differentiate their product from traditional produce retailers, leading supermarket chains in Central America are imposing private standards on their fresh produce suppliers. These are mainly for cosmetic quality, but emerging also are standards for fresh produce safety, in particular for leafy greens and some fruit. They are implementing the private standards at the same time they are cutting costs in order to compete with wetmarkets, via organizational change in the leading chains’ procurement systems (shifting away from use of spot markets and traditional wholesale systems toward centralized purchases and use of implicit contracts and specialized/dedicated wholesalers). They are coupling those changes with some actions to resolve idiosyncratic factor market failures facing farmers such as through provision of technical assistance. The implementation of these private standards of produce safety are good for consumers as they are among the few food safety practices by domestic food industry actors. But the tougher standards are a challenge for producers who need to make significant investments, implying the need for investment assistance and support services by governments. The paper presents field study findings for Costa Rica, Guatemala, El Salvador, Honduras, and Nicaragua from 2002 to 2004.

Standards for fresh fruits and vegetables (FFV) applied to producers in developing countries have recently figured prominently in the literature in two ways, both focused on trade as opposed to domestic markets. On the one hand, as FFV exports from developing countries have burgeoned over the past decade, the literature has focused on the application of safety and phytosanitary standards by developed countries to developing country exports (e.g., Unnevehr, 2000) as well as the recent rise of private FFV safety standards such as EUREPGAP applied by European supermarket chains (Codron et al., 2002). Some work has focused on company-specific standards and their effects on FFV from growers in a given country, such as UK supermarkets and Kenyan FFV exporters, in Dolan and Humphrey (2000). On the other hand, some studies have focused on how the consumer-driven demand for high quality FFV has translated into developed country supermarkets quality standards (in terms of appearance, size, shape, etc.), and thus standards for FFV from developing country producers – which in turn translated into the need for substantial chemical use by those producers to produce those quality attributes (Thrupp, 1995). The above discussion misses a major new determinant of standards faced by developing country producers. A decade ago the FFV sector was neatly divided into the export sector and the traditional FFV sector. The latter consists of wholesale markets, mom and pop stores, and open-air markets with essentially no quality or safety standards. Today, local supermarkets have risen to equal or exceed the importance of non-traditional exports in the Central American FFV sector, but there has been no exploration in the literature of how their emergence is affecting, if at all, the quality and safety standards of the FFV sold and consumed in the region. Local supermarkets tend to emphasize the marketing of FFV of high quality as a way of competing with traditional markets, and this quality tends to be defined mainly in terms of appearance (i.e., spotless, uniform fruits and vegetables in terms of size, shape, color, firmness, ripeness, etc.). Those quality standards, when applied locally just as Thrupp notes in the export market, create an incentive for an increase in the use of insecticides, fungicides, and other production and post-harvest technologies that can harm people. However, local supermarket demand can also create the incentives to put in practice new technologies and investments that improve control of important health problems, such as fatal diarrhea among children in the region caused by Escherichia coli. It may be that the supermarket sector may well have the greatest capacity and incentive to implement safety standards – public or privately formulated – in domestic marketing of FFV. In this paper we focus on standards the local supermarkets are imposing on suppliers in Central America, and how they are imposing standards, that is, how they organize their procurement system for FFV. The findings are a synthesis of recent case studies from Costa Rica, Guatemala, El Salvador, Honduras, and Nicaragua. The countries are in decreasing order of household income, share of supermarkets in overall food retail, and domestic public health standards. The research is based on fieldwork by a team of researchers in November 2002–May 2003 and March and July 2004, including rapid reconnaissance surveys of supermarket chains, wholesalers, and producers. The questions focused on procurement practices and application of standards, including private enforcement of public standards, and application of private standards.

The above results regarding the evolution of the retail sector in Central America, organizational change in the procurement system of supermarkets, and institutional change in the procurement system of supermarkets, together present the image of an inverted-U curve with respect to product safety standards, and a rising curve with respect to quality standards. In Central America, we see that as supermarkets rose, and quality standards rose, there was increasing pressure on the producers to use pesticides and farm intensively to meet the rising quality standards and the larger volumes from supermarkets. However, we showed that in the most advanced cases, there is a start down the slope of the inverted U curve, toward supermarket procurement systems driving reform of production systems toward safer and healthier systems. That of course coincides with large swathes of the procurement systems outside of leafy greens and berries and a few other FFV, even among the leading chains, still focused on cosmetic quality only and not yet safety. Of course the second and third tier chains are still focused on raising cosmetic quality standards and the implications for the pressures that puts on producers to “push” the land. Several needed actions would influence how and how fast supermarkets continue to develop quality and especially safety standards in Central America. The first set of needed actions is on the demand side: (1) public education concerning health aspects of FFV consumption; (2) the enactment and enforcement of public health regulations and liability laws with respect to produce, to spur supermarkets on toward implementation of safety standards. Our judgement is that demand side policies are more feasible and applicable only in the countries with relatively substantial middle classes and potential for enforcement by government: in particular Costa Rica but also Guatemala and perhaps El Salvador. The second set of needed actions is on the market side: (1) more laboratories and lower service fees to test products for pesticides and E. coli; these need to be cheap enough to be used for domestic markets, not just aimed at export, or domestic supplier capacity will not grow; (2) easier cross-border movement of produce; this will increase the chance for regionalization of procurement, which will further convergence of standards; (3) expansion and deepening of initiatives such as the Sello Azul and PIPAA efforts. These three are more generally applicable to all the countries. The third set of needed actions has to do with relax constraints on the farm side–constraints that supermarket procurement officers lament and feel constrain their ability to increase quality and safety: (1) the trend in this industry globally is away from extensive testing of final product towards process standards and controls (Reardon et al., 2001); this implies a need for investments in training and infrastructure at the farms, packing sheds and distribution centers, as well as affordable private labs to audit farms; (2) all of our respondents (supermarkets and farmers alike) felt that public extension services do not fill the need for technical assistance in a way that is adequate to upgrade their production and post harvest practices to meet supermarkets’ needs; (3) small and medium farmers’ assets (such as drip irrigation, green houses, trucks, cold chambers, record keeping skills, and so on) are vastly insufficient to meet volume and consistency and year-round availability needs of supermarkets; (4) the payment period of supermarkets is relatively long; this has more to do with which supplier types are excluded, but it suggests the need for innovative financial products and services. The above supply-side constraints in current practice lead to the substantial exclusion of under-capitalized small growers. There are ways to address this problem, and these are applicable to all countries. We observed resource-intensive donor and NGO projects that provide assistance to link farmers with exporters, agroindustries and supermarkets; these projects have a tendency to work with small commercial farmers and medium farmers for the local supermarket links and the medium and larger farmers for exports. Their methods and approach needs to be “scaled up” and adapted by the government services in order to reach the mass of producers. As much as possible there needs to be interaction between the “buyer and market focused” projects described above, and the broader supply-side and asset-transfer-focused projects in which multilateral donors and governments are most apt to be engaged. That will be a crucial element to “scaling up” and helping the small farmers of the region seize the opportunities – and face the challenges – of the rapidly emerging supermarket-market for FFV in the region.