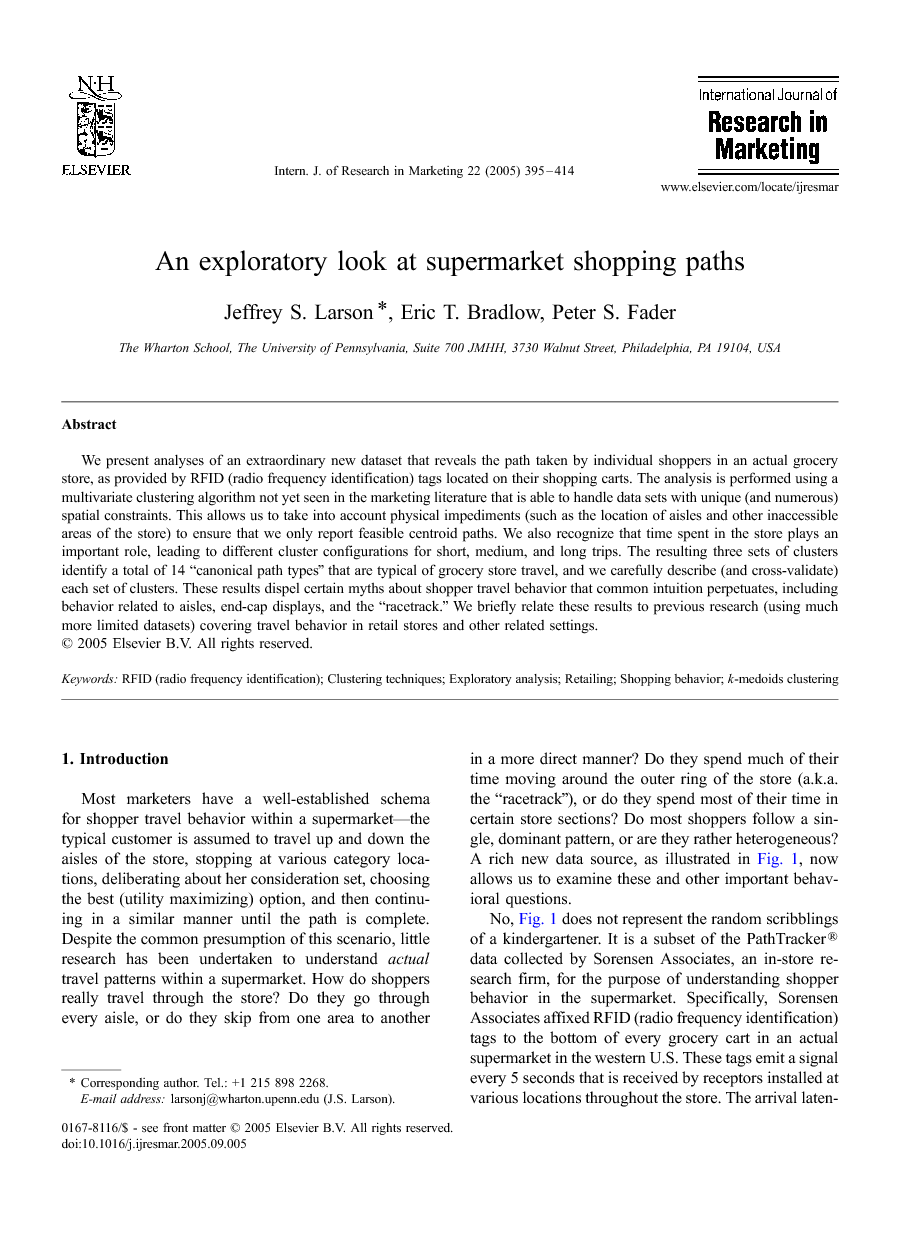 We present analyses of an extraordinary new dataset that reveals the path taken by individual shoppers in an actual grocery store, as provided by RFID (radio frequency identification) tags located on their shopping carts. The analysis is performed using a multivariate clustering algorithm not yet seen in the marketing literature that is able to handle data sets with unique (and numerous) spatial constraints. This allows us to take into account physical impediments (such as the location of aisles and other inaccessible areas of the store) to ensure that we only report feasible centroid paths. We also recognize that time spent in the store plays an important role, leading to different cluster configurations for short, medium, and long trips. The resulting three sets of clusters identify a total of 14 “canonical path types” that are typical of grocery store travel, and we carefully describe (and cross-validate) each set of clusters. These results dispel certain myths about shopper travel behavior that common intuition perpetuates, including behavior related to aisles, end-cap displays, and the “racetrack.” We briefly relate these results to previous research (using much more limited datasets) covering travel behavior in retail stores and other related settings.

Most marketers have a well-established schema for shopper travel behavior within a supermarket—the typical customer is assumed to travel up and down the aisles of the store, stopping at various category locations, deliberating about her consideration set, choosing the best (utility maximizing) option, and then continuing in a similar manner until the path is complete. Despite the common presumption of this scenario, little research has been undertaken to understand actual travel patterns within a supermarket. How do shoppers really travel through the store? Do they go through every aisle, or do they skip from one area to another in a more direct manner? Do they spend much of their time moving around the outer ring of the store (a.k.a. the “racetrack”), or do they spend most of their time in certain store sections? Do most shoppers follow a single, dominant pattern, or are they rather heterogeneous? A rich new data source, as illustrated in Fig. 1, now allows us to examine these and other important behavioral questions.No, Fig. 1 does not represent the random scribblings of a kindergartener. It is a subset of the PathTracker® data collected by Sorensen Associates, an in-store research firm, for the purpose of understanding shopper behavior in the supermarket. Specifically, Sorensen Associates affixed RFID (radio frequency identification) tags to the bottom of every grocery cart in an actual supermarket in the western U.S. These tags emit a signal every 5 seconds that is received by receptors installed at various locations throughout the store. The arrival latencies of the signals at the receptor locations are used to triangulate the position of the grocery cart. Thus, for every shopping path, data are recorded regarding the cart's two-dimensional location coordinates, (xit, yit) for shopper i at his tth observation (hereafter referred to as “blinks”), at 5-second intervals, which can be used to determine each cart's route through the entire store1. While ideally, one might hope to obtain positioning data directly from the shoppers themselves, this is not currently available in an actual commercial setting. Therefore, we use customers' grocery carts as a proxy for their shopping path, since we know the exact shopper location when the grocery cart is moving and a good guess of the general vicinity of the shopper when the grocery cart is stationary. Regardless, the methodology developed in this paper will continue to be applicable as newer and better datasets become available. Finally, the time and location of the cart at the end of each path offers information about the checkout process; point-of-sale data can then be matched with the cart movement records to provide a complete picture of each shopping path. See Sorensen (2003) for more details about the PathTracker® system. The goal of this research is to undertake exploratory analyses, useful for data summarization, inference, and intuition about shopper travel path data. Specifically, we want to identify typical in-store supermarket travel behaviors that will help us understand how shoppers move through a supermarket. Similar research ideas, summarizing large sets of “behavioral” curves as in Fig. 1 have been explored using principal components analysis methods (Bradlow, 2002 and Jones and Rice, 1992); however, our goal here is not to explain the maximal variation across customers with principal curves, but instead to cluster respondents into “types” of shoppers and describe the prototypical path of a general cluster. Unfortunately, there are numerous challenges we face, since the application of standard clustering routines is not feasible due to the extremely large number of spatial constraints imposed by the physical supermarket layout (e.g. people can't walk through store shelves). For this reason, the contribution of this research is not limited to the empirical findings of the in-store path data, but also introduces to the marketing literature a multivariate clustering algorithm that can be applied to other settings with a large number of spatial constraints. Although this new method represents a useful step forward in our ability to analyze multivariate data, we wish to emphasize our exploratory objectives: we want to use this procedure to help us identify predominant patterns that will catalyze future research. Given the newness of this area, we are not yet at the stage of being able to create (or test) formal theories of shopping behavior. In other words, in this paper we will raise more questions than provide answers, and we hope to motivate readers to pursue these research issues with complementary (and more conclusive) research methods. The remainder of the paper is laid out as follows. First, we describe the data in more detail and explain various obstacles in undertaking exploratory analyses on this data (such as the numerous spatial constraints). Next, we detail the new-to-marketing clustering algorithm used to overcome these obstacles. We then present the results of the algorithm and the canonical shopper path profiles that emerge. The results are then displayed in relation to a set of variables that describe the travel areas of each path. We demonstrate that our methods enable us to cluster shopper paths along important dimensions that would be missed using simpler methods, lending support to the value of our techniques. We next perform a cross-validation of our results to assess the reliability of the findings. Finally, we conclude with a discussion section which summarizes the potential impact of the current findings and relates the current work to past and future research.