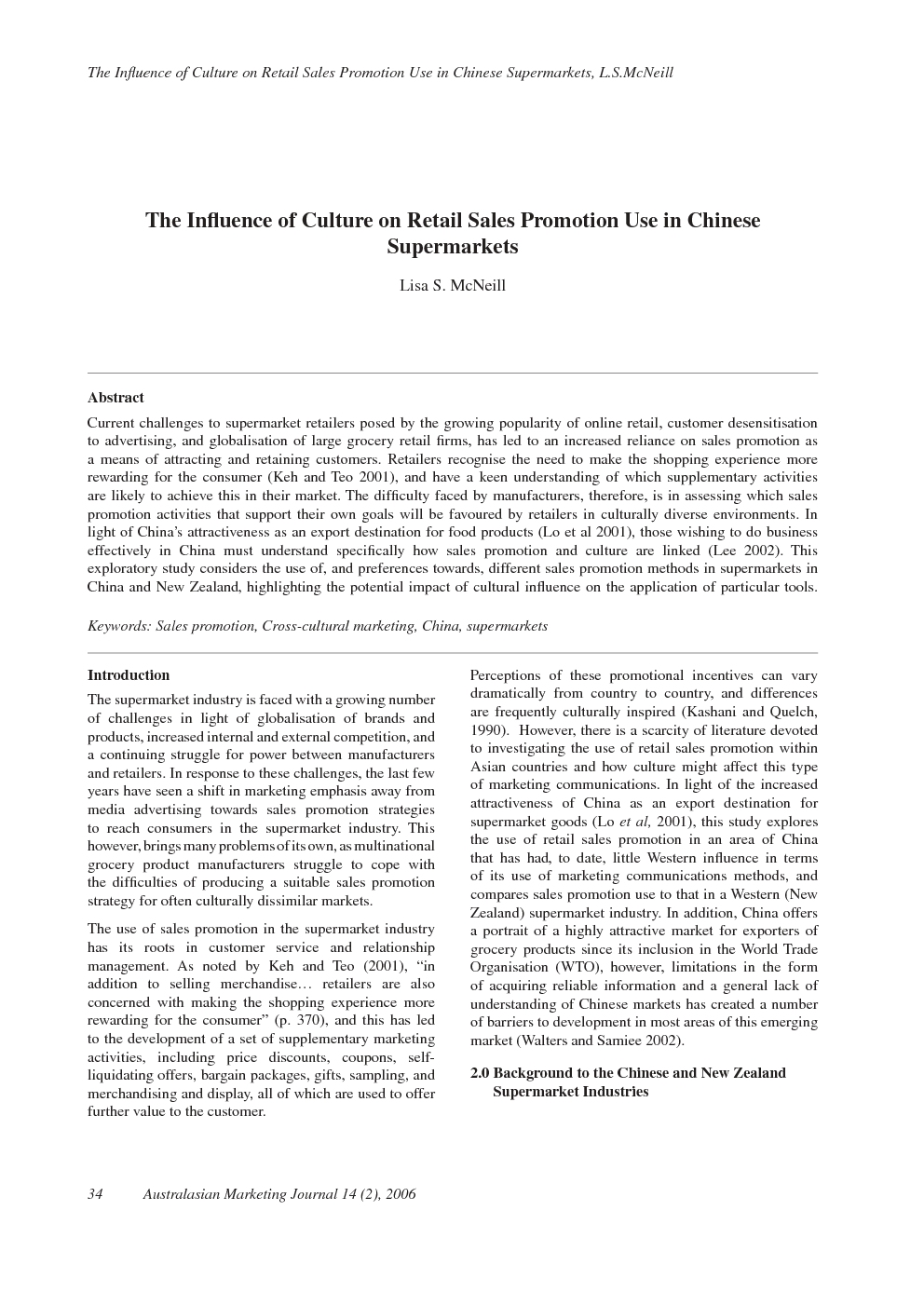 Current challenges to supermarket retailers posed by the growing popularity of online retail, customer desensitisation to advertising, and globalisation of large grocery retail firms, has led to an increased reliance on sales promotion as a means of attracting and retaining customers. Retailers recognise the need to make the shopping experience more rewarding for the consumer (Keh and Teo 2001), and have a keen understanding of which supplementary activities are likely to achieve this in their market. The difficulty faced by manufacturers, therefore, is in assessing which sales promotion activities that support their own goals will be favoured by retailers in culturally diverse environments. In light of China's attractiveness as an export destination for food products (Lo et al 2001), those wishing to do business effectively in China must understand specifically how sales promotion and culture are linked (Lee 2002). This exploratory study considers the use of, and preferences towards, different sales promotion methods in supermarkets in China and New Zealand, highlighting the potential impact of cultural influence on the application of particular tools.

The supermarket industry is faced with a growing number of challenges in light of globalisation of brands and products, increased internal and external competition, and a continuing struggle for power between manufacturers and retailers. In response to these challenges, the last few years have seen a shift in marketing emphasis away from media advertising towards sales promotion strategies to reach consumers in the supermarket industry. This however, brings many problems of its own, as multinational grocery product manufacturers struggle to cope with the difficulties of producing a suitable sales promotion strategy for often culturally dissimilar markets. The use of sales promotion in the supermarket industry has its roots in customer service and relationship management. As noted by Keh and Teo (2001), “in addition to selling merchandise... retailers are also concerned with making the shopping experience more rewarding for the consumer” (p. 370), and this has led to the development of a set of supplementary marketing activities, including price discounts, coupons, self- liquidating offers, bargain packages, gifts, sampling, and merchandising and display, all of which are used to offer further value to the customer.Perceptions of these promotional incentives can vary dramatically from country to country, and differences are frequently culturally inspired (Kashani and Quelch, 1990). However, there is a scarcity of literature devoted to investigating the use of retail sales promotion within Asian countries and how culture might affect this type of marketing communications. In light of the increased attractiveness of China as an export destination for supermarket goods (Lo et al, 2001), this study explores the use of retail sales promotion in an area of China that has had, to date, little Western influence in terms of its use of marketing communications methods, and compares sales promotion use to that in a Western (New Zealand) supermarket industry. In addition, China offers a portrait of a highly attractive market for exporters of grocery products since its inclusion in the World Trade Organisation (WTO), however, limitations in the form of acquiring reliable information and a general lack of understanding of Chinese markets has created a number of barriers to development in most areas of this emerging market (Walters and Samiee 2002).

The research has shown that retail sales promotion in the Chinese supermarket industry should be designed to show consumers that they have developed a mutually beneficial relationship with retailers, and that their custom is valued and rewarded. This is not however, best achieved through forced loyalty programmes and the like, but simply through the use of reward based sales promotion such as free gifts or premiums and straight price discounts. The study found the most popular retail sales promotion methods in Chinese supermarkets to be price discounts (used in conjunction with P-O-P displays) and free gifts/premiums. The emphasis on these discreet sales promotion methods appears strongly linked to Chinese culture, as is the lack of emphasis on interactive sales promotion methods which require the customer to deal with a salesperson. In addition, passive discounts, which remove the risk of embarrassment or loss of face from ‘asking’ for a cheaper price are far more suited to this market. In New Zealand, the relationship aspect of supermarket retailing is less important, as long as customers feel they are getting a ‘good deal’ in terms of both price and quality they will continue to patronise a store. A wider mix of promotional tools can be used in the New Zealand market, although emphasis should be on price offers (with a linked P-O-P display) and combination or volume offers, where the consumer feels they will receive better value for money through the purchase. Loyalty schemes can also be useful in this market, particularly when targeting medium to upper income consumers, and this echoes the findings from the Chinese market – that a country with low levels of cultural loyalty may need incentive based schemes to create customer loyalty and a country with high levels of culture based loyalty will not. Overall, the current study highlights the need for cultural awareness when selling in different countries, despite modernization of many aspects of the retail market. While aspects such as development of the industry as a whole, coupled with wider consumer exposure to sales promotion, mean that some techniques can be applied in the supermarket industry regardless of country, as seen in China and New Zealand, some cultural influence endures. A greater emphasis on customer relationship development and maintenance through rewards based use of sales promotion is necessary to be successful in the Chinese market, as is recognition of the Chinese consumer’s reluctance to ‘ask’ for discounts and special treatment. As such, discreet, non-interactive sales promotion tools are the most useful, supplemented by activities which continue to build a strong (and thus loyal) relationship between the retailer, the brand and the consumer. In contrast, loyalty needs encouraging through the use of special schemes in an individualistic country such as New Zealand, although price offers are by nature the most useful tool in supermarket retailing regardless of store type or country. Where this exploratory study has examined the potential influence of culture on the application and success of sales promotion in the supermarket industry in New Zealand and China, it is now necessary to explore the conclusions given here in the context of other Asian, Western and European countries in order to better understand the overall impact of culture on sales promotion.