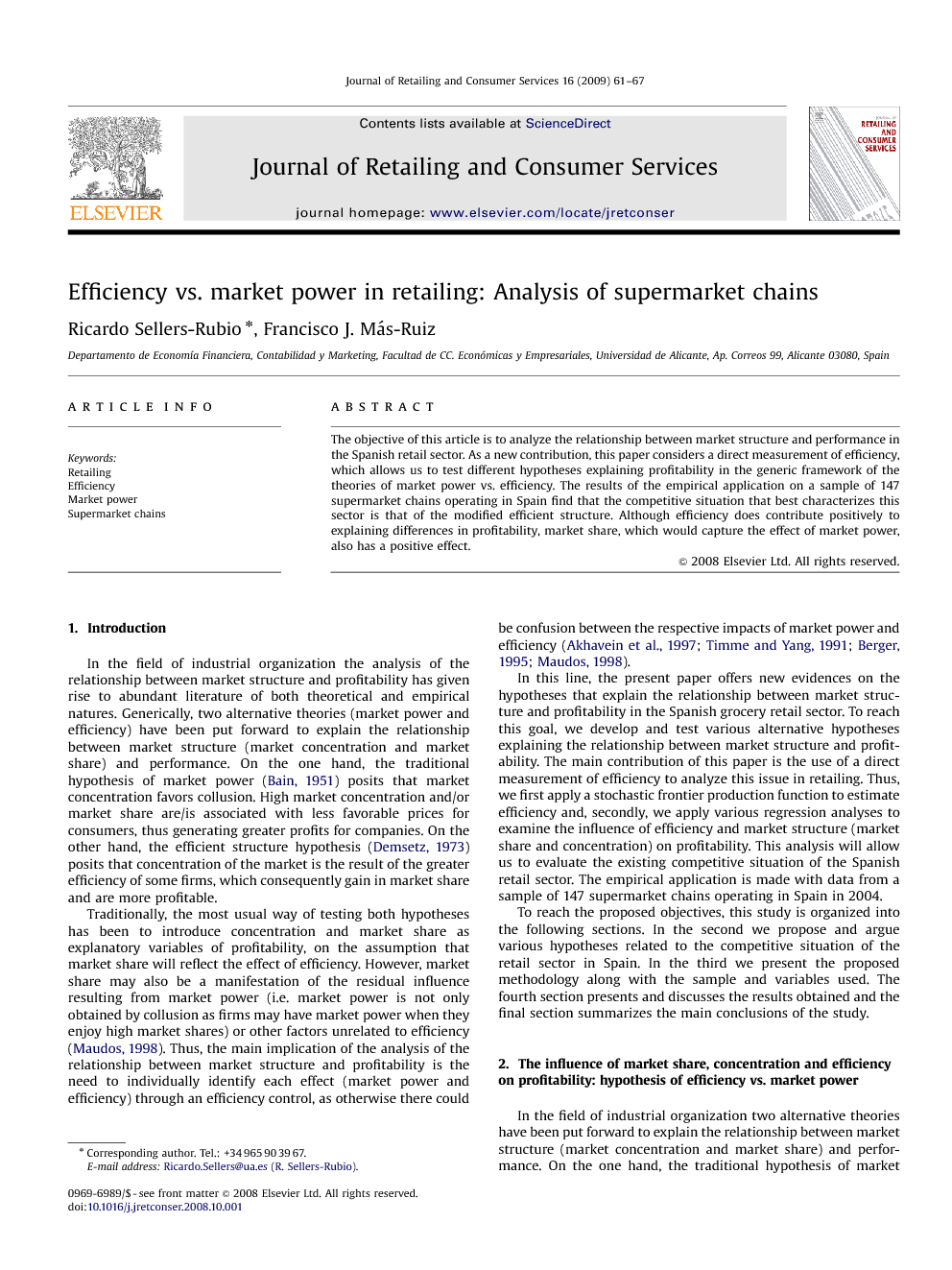 The objective of this article is to analyze the relationship between market structure and performance in the Spanish retail sector. As a new contribution, this paper considers a direct measurement of efficiency, which allows us to test different hypotheses explaining profitability in the generic framework of the theories of market power vs. efficiency. The results of the empirical application on a sample of 147 supermarket chains operating in Spain find that the competitive situation that best characterizes this sector is that of the modified efficient structure. Although efficiency does contribute positively to explaining differences in profitability, market share, which would capture the effect of market power, also has a positive effect.

In the field of industrial organization the analysis of the relationship between market structure and profitability has given rise to abundant literature of both theoretical and empirical natures. Generically, two alternative theories (market power and efficiency) have been put forward to explain the relationship between market structure (market concentration and market share) and performance. On the one hand, the traditional hypothesis of market power (Bain, 1951) posits that market concentration favors collusion. High market concentration and/or market share are/is associated with less favorable prices for consumers, thus generating greater profits for companies. On the other hand, the efficient structure hypothesis (Demsetz, 1973) posits that concentration of the market is the result of the greater efficiency of some firms, which consequently gain in market share and are more profitable. Traditionally, the most usual way of testing both hypotheses has been to introduce concentration and market share as explanatory variables of profitability, on the assumption that market share will reflect the effect of efficiency. However, market share may also be a manifestation of the residual influence resulting from market power (i.e. market power is not only obtained by collusion as firms may have market power when they enjoy high market shares) or other factors unrelated to efficiency (Maudos, 1998). Thus, the main implication of the analysis of the relationship between market structure and profitability is the need to individually identify each effect (market power and efficiency) through an efficiency control, as otherwise there could be confusion between the respective impacts of market power and efficiency (Akhavein et al., 1997; Timme and Yang, 1991; Berger, 1995; Maudos, 1998). In this line, the present paper offers new evidences on the hypotheses that explain the relationship between market structure and profitability in the Spanish grocery retail sector. To reach this goal, we develop and test various alternative hypotheses explaining the relationship between market structure and profitability. The main contribution of this paper is the use of a direct measurement of efficiency to analyze this issue in retailing. Thus, we first apply a stochastic frontier production function to estimate efficiency and, secondly, we apply various regression analyses to examine the influence of efficiency and market structure (market share and concentration) on profitability. This analysis will allow us to evaluate the existing competitive situation of the Spanish retail sector. The empirical application is made with data from a sample of 147 supermarket chains operating in Spain in 2004. To reach the proposed objectives, this study is organized into the following sections. In the second we propose and argue various hypotheses related to the competitive situation of the retail sector in Spain. In the third we present the proposed methodology along with the sample and variables used. The fourth section presents and discusses the results obtained and the final section summarizes the main conclusions of the study.

The objective of this study is to analyze the relationship between market structure and profitability in the Spanish grocery retail sector with data on a sample of supermarket chains operating in Spain in 2004. The main contribution of the paper relies on the use of a direct measure of efficiency to analyze the competitive situation in the Spanish supermarket sector. The results obtained indicate that the main determinants of profitability for the sample analyzed are market share and efficiency, which upholds the proposal that the competitive situation characterizing the supermarket subsector is that of a modified efficient structure. This result is valuable when putting strategies into practice. In particular, it highlights the importance of efficiency and market share as key factors to improving profitability, but it also means that the potential benefits associated with company size exist even in nonconcentrated markets. In this sense, the size of these companies appears to provide a useful reference structure in the analysis of competition in order to detect possible competitive advantages. Further, retail managers should make efforts to analyze their competitive environment from the point of view of each competitor, analyzing their own efficiency levels. Efficiency is a crucial factor to explain profitability. With regard to the limitations of the study, which call for prudent reading of the results obtained, we can highlight the following: Firstly, the analysis period is of only 1 year and is based on a single retail format, which means that the conclusions of the study should only be considered in terms of the sample used. Secondly, the impossibility of including other factors of the competitive structure, both vertical and horizontal, which could affect profitability in retail companies, gives us a model with a limited specification. Although the objective of the study is based on an analysis of the determinants of profitability in terms of market structure and efficiency, there could be problems derived from the omission of other relevant variables, which could also affect profitability. Finally, given the important implications that size increases and market concentration have on the sector, for future lines of research we suggest the distinction between the ways of realizing the concentration process, internal growth (opening new outlets) and external growth (takeovers or mergers with other companies), insofar as the greater use of mergers and takeovers supposes a greater tendency towards concentration than towards internal growth. This means that the external growth of companies could cause an acceleration of the concentration process and its possible consequences on the degree and type of competition, at the same time as allowing improvements in the efficiency of the distribution system. Conversely, if internal growth is used to create entry barriers, through the anticipation of future demand of the market, it will produce an oversizing of retail supply and, consequently, an increase to the total cost of the activity, with negative effects on the efficiency of the distribution system. Therefore, the analysis of the execution method of this process allows examination of its repercussions on the degree of efficiency of the commercial distribution system.