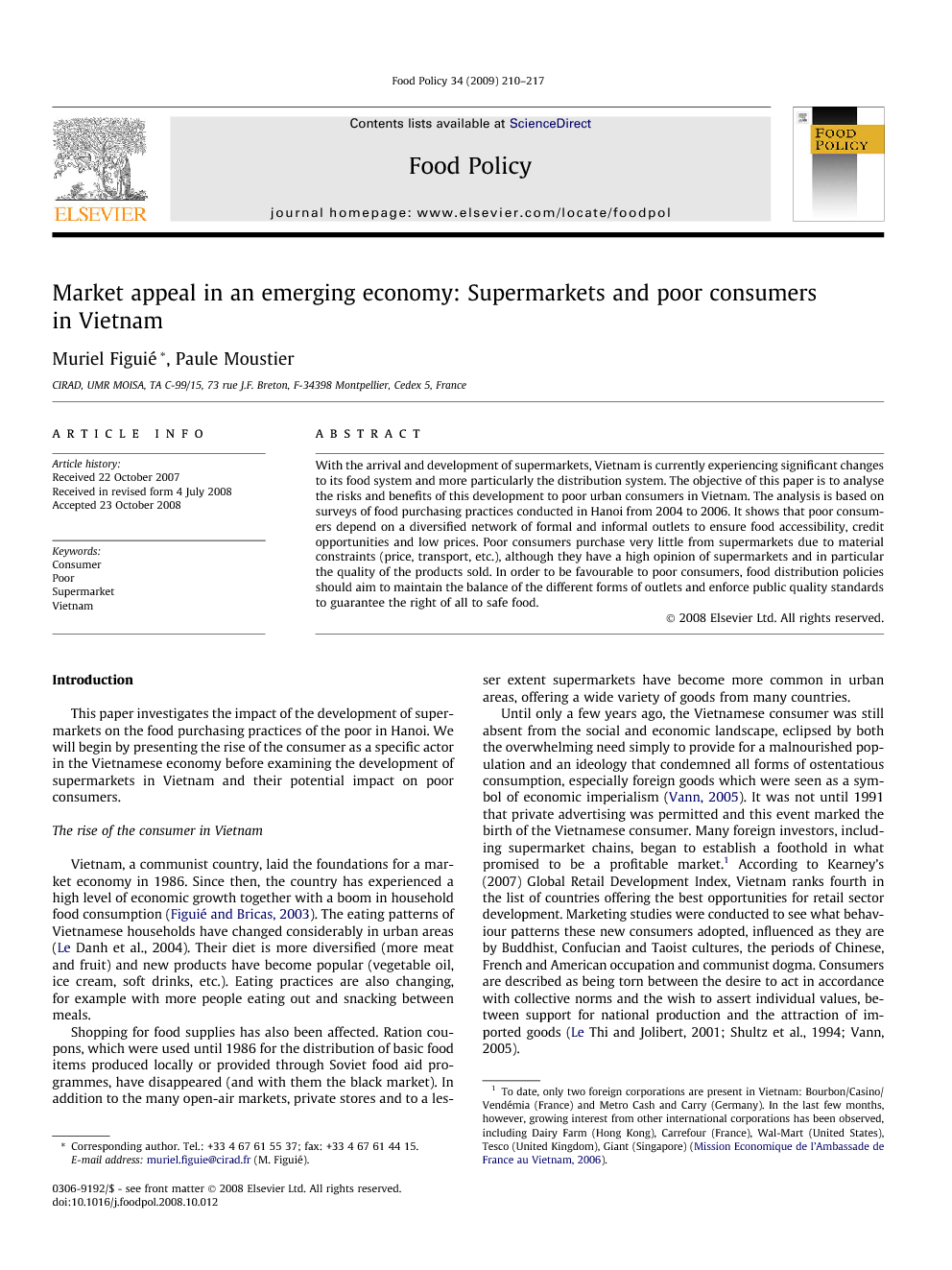 With the arrival and development of supermarkets, Vietnam is currently experiencing significant changes to its food system and more particularly the distribution system. The objective of this paper is to analyse the risks and benefits of this development to poor urban consumers in Vietnam. The analysis is based on surveys of food purchasing practices conducted in Hanoi from 2004 to 2006. It shows that poor consumers depend on a diversified network of formal and informal outlets to ensure food accessibility, credit opportunities and low prices. Poor consumers purchase very little from supermarkets due to material constraints (price, transport, etc.), although they have a high opinion of supermarkets and in particular the quality of the products sold. In order to be favourable to poor consumers, food distribution policies should aim to maintain the balance of the different forms of outlets and enforce public quality standards to guarantee the right of all to safe food.

This paper investigates the impact of the development of supermarkets on the food purchasing practices of the poor in Hanoi. We will begin by presenting the rise of the consumer as a specific actor in the Vietnamese economy before examining the development of supermarkets in Vietnam and their potential impact on poor consumers. The rise of the consumer in Vietnam Vietnam, a communist country, laid the foundations for a market economy in 1986. Since then, the country has experienced a high level of economic growth together with a boom in household food consumption (Figuié and Bricas, 2003). The eating patterns of Vietnamese households have changed considerably in urban areas (Le Danh et al., 2004). Their diet is more diversified (more meat and fruit) and new products have become popular (vegetable oil, ice cream, soft drinks, etc.). Eating practices are also changing, for example with more people eating out and snacking between meals. Shopping for food supplies has also been affected. Ration coupons, which were used until 1986 for the distribution of basic food items produced locally or provided through Soviet food aid programmes, have disappeared (and with them the black market). In addition to the many open-air markets, private stores and to a lesser extent supermarkets have become more common in urban areas, offering a wide variety of goods from many countries. Until only a few years ago, the Vietnamese consumer was still absent from the social and economic landscape, eclipsed by both the overwhelming need simply to provide for a malnourished population and an ideology that condemned all forms of ostentatious consumption, especially foreign goods which were seen as a symbol of economic imperialism (Vann, 2005). It was not until 1991 that private advertising was permitted and this event marked the birth of the Vietnamese consumer. Many foreign investors, including supermarket chains, began to establish a foothold in what promised to be a profitable market.1 According to Kearney’s (2007) Global Retail Development Index, Vietnam ranks fourth in the list of countries offering the best opportunities for retail sector development. Marketing studies were conducted to see what behaviour patterns these new consumers adopted, influenced as they are by Buddhist, Confucian and Taoist cultures, the periods of Chinese, French and American occupation and communist dogma. Consumers are described as being torn between the desire to act in accordance with collective norms and the wish to assert individual values, between support for national production and the attraction of imported goods (Le Thi and Jolibert, 2001, Shultz et al., 1994 and Vann, 2005).

Even though the role of public investment and intervention in Vietnam is diminishing in favour of the private sector, there is still a case for public intervention in support of poverty-alleviation objectives in close collaboration with private operators. The authorities have so far shown a positive attitude towards the development of supermarkets. The planned rapid expansion of supermarkets and the elimination of temporary markets and street vendors are specified in the strategy of the Domestic Trade Department of the Ministry of Trade for a timeframe of the year 2020 on the grounds of “modernisation” and “civilisation” (Vietnam Ministry of Trade, 2006). Even the area of some formal retail markets in Hanoi (including Buoi and Cua Nam markets) has been reduced to accommodate trading centres. Our study shows the importance of the traditional food retailing sector for poor consumers in terms of accessibility, credit opportunities and low prices. The present diversity of retail outlets in Vietnam should be maintained as it fits the diversity of consumer purchasing power levels and allows small-scale traders to maintain their livelihoods. We concur with the recommendation of Vorley et al. (2007) that public and private investments should be geared towards upgrading traditional markets. The different retail outlets demonstrate comparative advantages for consumers. These should be strengthened and the disadvantages reduced. Street vendors and market traders should emphasise their advantages in terms of food freshness and low prices while improving hygiene and developing relations with farmers to ensure food safety. These recommendations intended for private operators need public backing, especially for operators with less capital, namely street vendors and small-scale farmers. The experiences of other countries, such as Korea, India and Singapore, provide examples of the successful integration of street vending activities in urban planning thanks to the organisation of street vendors and dialogue with the authorities. Instead of simply prohibiting street vending activities and informal markets, the authorities could support the “formalisation” of this sector, allowing street vendors to operate in designated areas (off main streets). Decisions concerning the relocation of markets should be taken after consultation with the traders that may be affected. Credit support should be provided to vendors who make an effort to upgrade their businesses, including street vendors and quality food shops managed by farmer groups. The organisation of special farmers’ markets as alternative distribution channels enabling consumers and farmers to benefit from both proximity and the development of relationships of trust should also be encouraged (Kirwan, 2004 and Braber, 2006). In terms of access to food quality, the claim of consumers that supermarkets offer better-quality products is still to be confirmed. With regard to food safety, preliminary studies indicate that finding harmful pesticide residues in vegetables is less frequent (although not unheard of) in supermarkets than in ordinary market outlets. However, small shops and “safe vegetable” market stalls supplied by small-scale farmer groups committed to “safe vegetable” programmes (vegetables production based on Integrated Pest Management) hold their own in comparison to supermarkets (Nguyen and Moustier, 2006). Nevertheless, by means of private standards, supermarkets would seem to be the only actors in Vietnam currently capable of improving the safety of the goods on offer in light of weak state action in imposing public standards. This underlines the failure of public institutions and the withdrawal of the State in its economic reform process. In a context of urbanisation, where the anonymity of trade will probably increase, and assuming that this confidence in supermarkets is well founded, a very large segment of the population, too poor to shop in modern outlets, could then find themselves excluded from the benefits of improved food safety. Access to safe food is a right for all consumers and as health is a public good, it should not be left solely in the hands of private firms. It has been suggested that the existing Vietnamese consumer association should intervene more frequently in the development and enforcement of public food safety standards. Supermarkets can also be allies in this process. In short, the development of supermarkets should be accompanied by policies which take account of consumers’ interests, including those of poor consumers, i.e. policies which aim to avoid excessive concentration, maintain a balance with regard to the different forms of outlets and enforce quality standards to guarantee the right of all persons to low-cost, fresh and safe food.