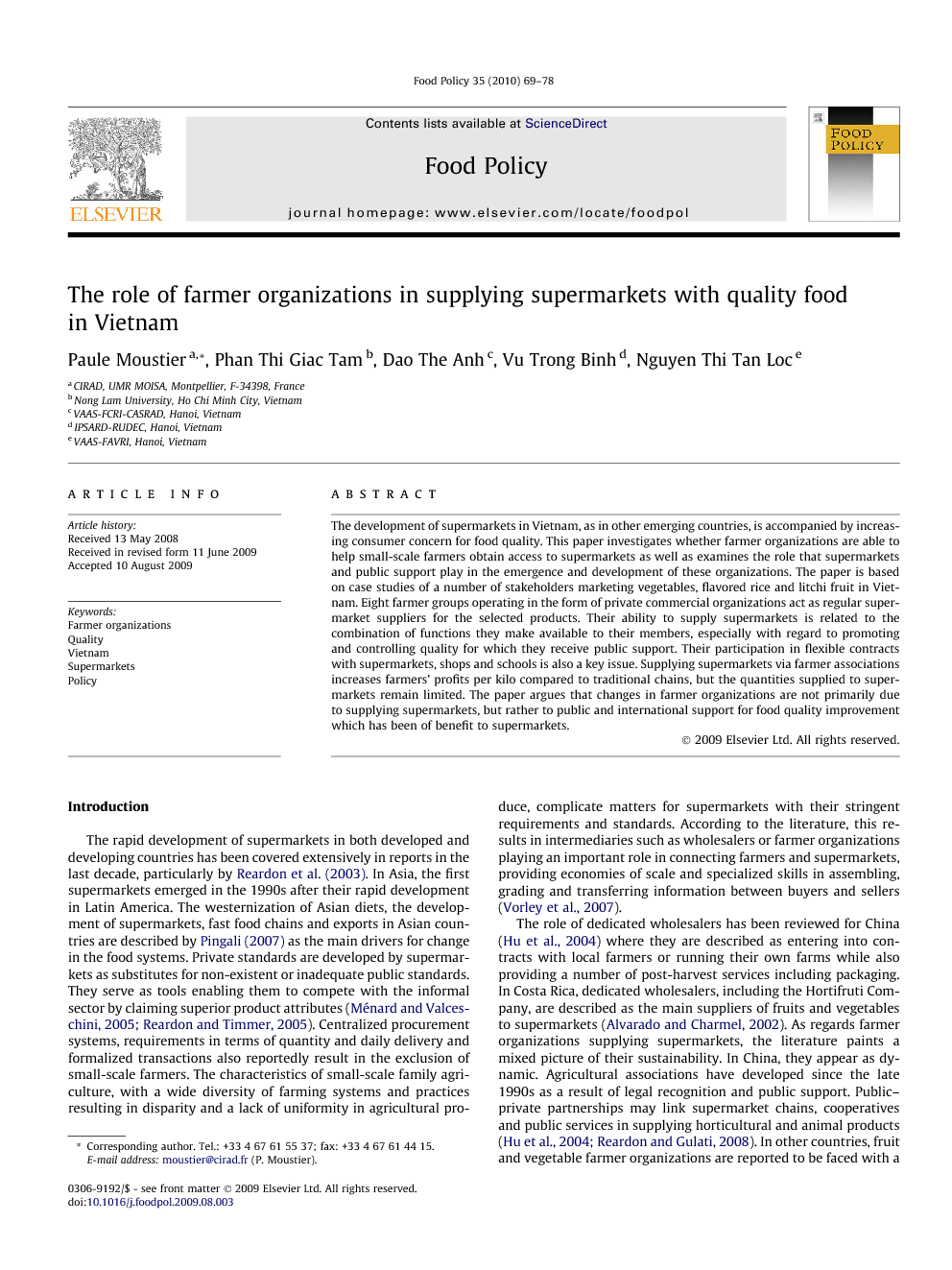 The development of supermarkets in Vietnam, as in other emerging countries, is accompanied by increasing consumer concern for food quality. This paper investigates whether farmer organizations are able to help small-scale farmers obtain access to supermarkets as well as examines the role that supermarkets and public support play in the emergence and development of these organizations. The paper is based on case studies of a number of stakeholders marketing vegetables, flavored rice and litchi fruit in Vietnam. Eight farmer groups operating in the form of private commercial organizations act as regular supermarket suppliers for the selected products. Their ability to supply supermarkets is related to the combination of functions they make available to their members, especially with regard to promoting and controlling quality for which they receive public support. Their participation in flexible contracts with supermarkets, shops and schools is also a key issue. Supplying supermarkets via farmer associations increases farmers’ profits per kilo compared to traditional chains, but the quantities supplied to supermarkets remain limited. The paper argues that changes in farmer organizations are not primarily due to supplying supermarkets, but rather to public and international support for food quality improvement which has been of benefit to supermarkets.

Collective action by farmers plays a crucial role in supplying supermarkets in Vietnam, mostly because of its role in the development and promotion of quality food. The historical development of farmer organizations involved in the marketing of quality food products shows that supermarkets are not the primary vectors of change, even though they contribute to it. In fact, supermarkets benefit from changes made by the public administration and pioneering farmers in response to changes in consumer demand. Yet the rise of the supermarket and the development of farmer associations involved in marketing share certain common roots, i.e. consumer concerns about food quality. The strong concern of public authorities over this question has been translated into support for farm organizations involved in food quality, as well as support for the development of supermarkets. Hence both supermarkets and farmer organizations contribute to adapting and modernizing the food systems. Supermarkets are currently one of several options, albeit minor, for farmers to market their “quality” products with a price premium. However, this type of outlet is becoming larger with increasingly competitive strategies concerning the range of suppliers. On the one hand, this may result in the further development of innovations in terms of production to sharpen the comparative advantages of suppliers, in particular with regard to the development of quality. On the other hand, it may result in less advantageous pricing conditions. Supermarkets may also tend to promote their own labeling system rather than the labeling of farmer organizations to obtain more of the economic rent gained from indicating quality. This can already be observed, as vegetables are increasingly sold in bulk with supermarkets presenting them under a general “safe vegetables” sign. Farmers face numerous difficulties in obtaining access to credit compared to private investors involved in modern distribution. Hence we recommend that local administrations support investment in rural infrastructure to promote product quality and access to retail outlets in the form of market stalls, shops or farmers’ markets. The latter have yet to be introduced in Vietnam, unlike other countries such as Malaysia or India (Braber, 2006) or indeed in Europe (Kirwan, 2004). It is also important that local administrations be more closely involved in the control of food safety at the production and marketing stages. This is primarily for public health reasons, but also to strengthen the credibility of farmer organizations. Rather than endorsing all the functions of food quality control, they should stimulate the emergence and accreditation of private, third-party certifiers which are as yet restricted in Vietnam to a small number of companies dealing in agricultural exports. A more systematic evaluation of the financial impact of belonging or not belonging to farmer organizations should be conducted based on a large representative sample and using certain econometric tests. It would also be useful to investigate further the patterns of free-riding in the groups, in particular by members who may want to benefit from the reputation of the group without undertaking the necessary efforts in terms of quality.