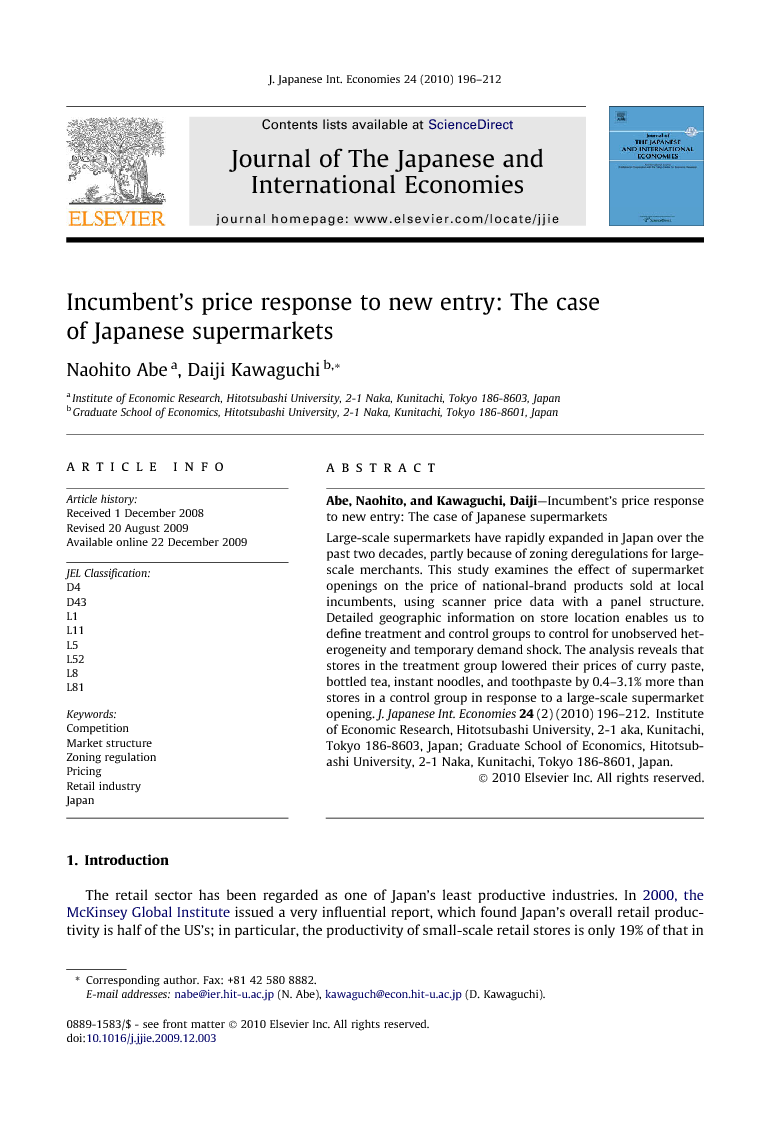 Large-scale supermarkets have rapidly expanded in Japan over the past two decades, partly because of zoning deregulations for large-scale merchants. This study examines the effect of supermarket openings on the price of national-brand products sold at local incumbents, using scanner price data with a panel structure. Detailed geographic information on store location enables us to define treatment and control groups to control for unobserved heterogeneity and temporary demand shock. The analysis reveals that stores in the treatment group lowered their prices of curry paste, bottled tea, instant noodles, and toothpaste by 0.4–3.1% more than stores in a control group in response to a large-scale supermarket opening.

This paper reports evidence on how the entry of new supermarkets in a local market changes the prices of selected national brand items, such as processed food and groceries, at incumbent stores. We have contrasted the price changes of supermarkets that are closely located to the entrant and ones at a distance, based on scanner data with detailed geographic locations of supermarkets. We have found that stores located within 1.5 km reduce prices of curry paste, bottled tea, instant coffee, instant noodles, and toothpaste by 0.9–3.1%. These results suggest that the entry of new supermarkets in a geographic region cuts the market power of incumbent supermarkets and leads them to lower prices. The degree of price reduction is greater when there is only one treatment store, which is consistent with Cournot’s monopolistic competition model. The negative price effects of the new opening are not temporary, but last for a long time, which implies that the welfare gain for consumers is not negligible. We also found that it is large supermarket stores, not GMSs, that bring competition to incumbent food stores. This result suggests that GMSs might have positive spillover effects for an entire region. Although our data contain rich information on prices and entry, to evaluate the total welfare effects of the new entry, we need additional data, such as precise exit information for each store, as well as quantity information for each product at the market level. A data set with a wider coverage of stores would enable us to quantify the consumer surplus. This would be a useful extension of this paper to derive implications for merchandise location policy, as in recent British studies by Griffith and Harmgart (2008). There are many remaining issues to be pursued. In this paper, we have not estimated a structural model of monopolistic competition. To evaluate the welfare effects of the policy change, we need a rigorous structural model, such as those of Salop (1979) and Jia (2008). Other topics to be investigated include the effects on local labor markets, the effects on the productivity of incumbent stores, and regional productivity.